No Longer a Tourist

It took some weeks, but I am no longer a tourist.  I am a bonafide, card-carrying resident of the Sultanate of Oman!  And I also have my Omani driver's license, something not to be taken for granted!

First of all, Joe had to get copies of my driver's license from Illinois, as well as copies of my passport.  He took them to work, and I have no idea what was done with them.  After a few weeks,  Joe, Austin, and I met with Khalfan, Joe's office PRO.  Since Austin is 15, he needed to have his own resident's card.  Savannah is too young right now and will get hers at a later date. 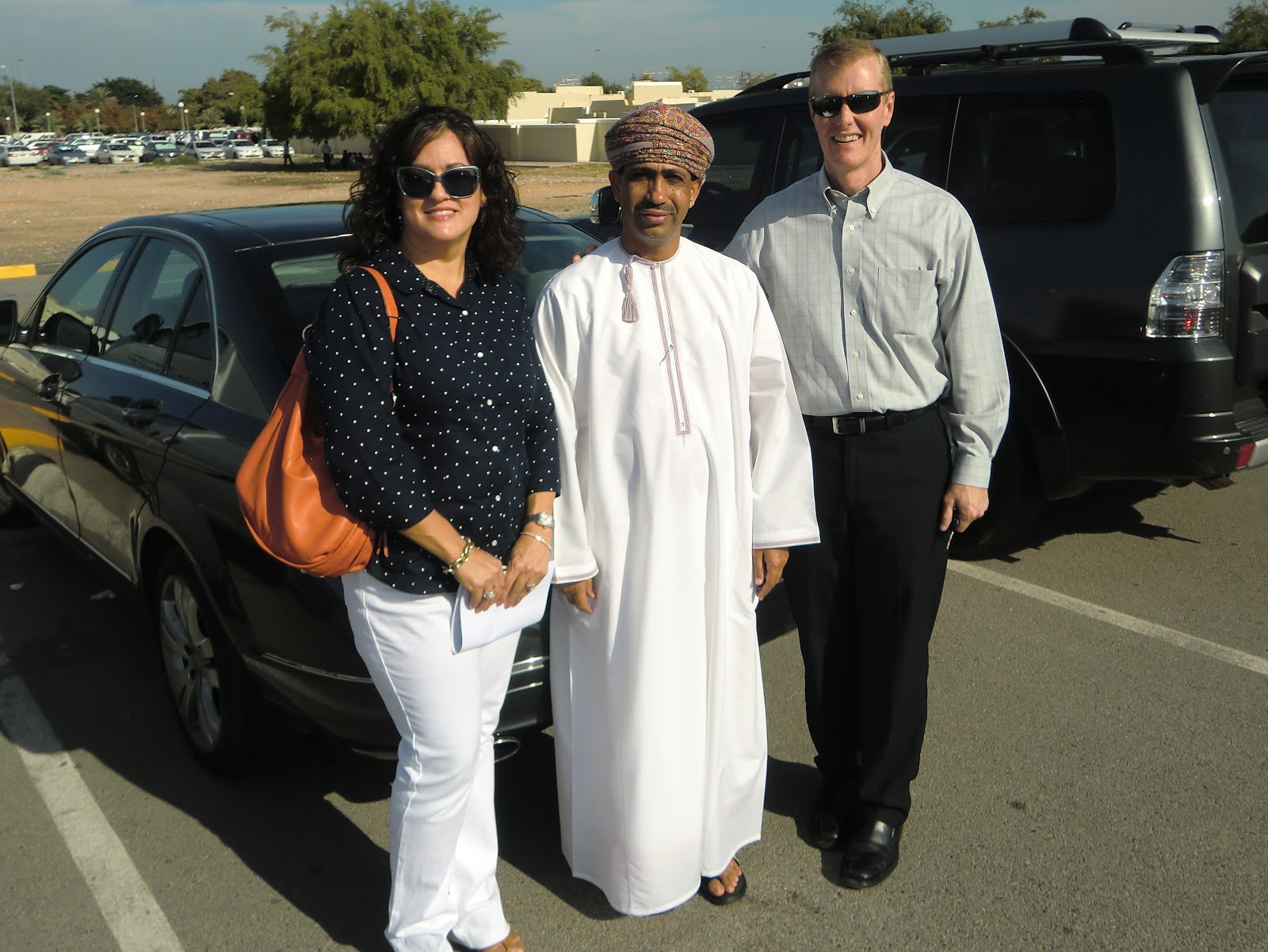 Here we are with Khalfan - he is a Public Relations Officer (PRO).  Many companies and offices hire PRO's (Omani nationals) to deal with all the government agencies and legalities associated with living and working in Oman.  They help secure visas and licenses for all the employees and their families.

On a sidenote, I want to talk about Khalfan's attire.  This is a typical Omani dishdasha, worn by all the Omani men and boys.  Every day.  (Joe says he would like to wear it because it's so simple, cool, and requires no mixing and matching!) The following information comes from Oman's Minstry of Information website.    The national dress for Omani men is a simple, ankle-length, collarless gown with long sleeves called the dishdasha. The colour most frequently worn is white, although a variety of other colours such as black, blue, brown and lilac can also be seen. Its main adornment is a tassel (furakha) sewn into the neckline, which can be impregnated with perfume. Underneath the dishdasha, a plain piece of cloth covering the body is worn from the waist down. Omani men may wear a variety of head dresses. The muzzar is a square of finely woven woollen or cotton fabric, wrapped and folded into a turban. Underneath this, the kummar, an intricately embroidered cap, is sometimes worn. 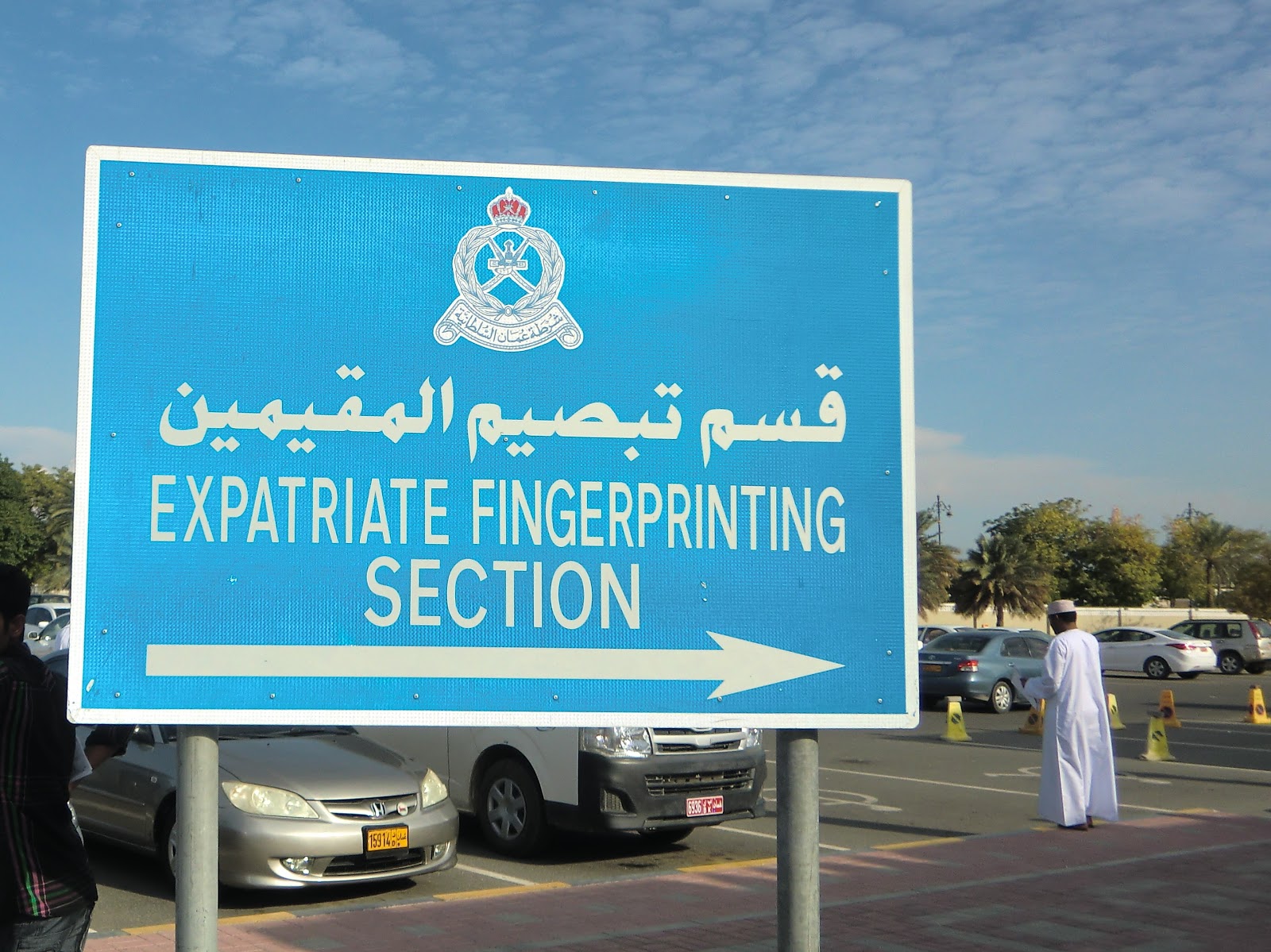 Next came the fingerprinting.  Expatriate, that is what I am.  Expat for short.  Now I was a bit concerned about being fingerprinted.  You see, I was wearing white pants and didn't want to get any ink on them.  You have to realize that the last time I was fingerprinted was 1985 when I was getting my private investigator's license.  There was a lot of ink involved.  Oh, you didn't know I was a private investigator?  I'll save that story for another time.  Anyways, I was taken back to a 'Ladies Only' room, and electronically fingerprinted by a policewoman.
At this point, we waited for a while and received our freshly printed resident's cards.  Now Khalfan was on a roll.  He suggested that as long as we were together we should go for the double and get my driver's license.  Music to my ears.  You have to understand, you work around the PRO's schedule, he does not work around yours. 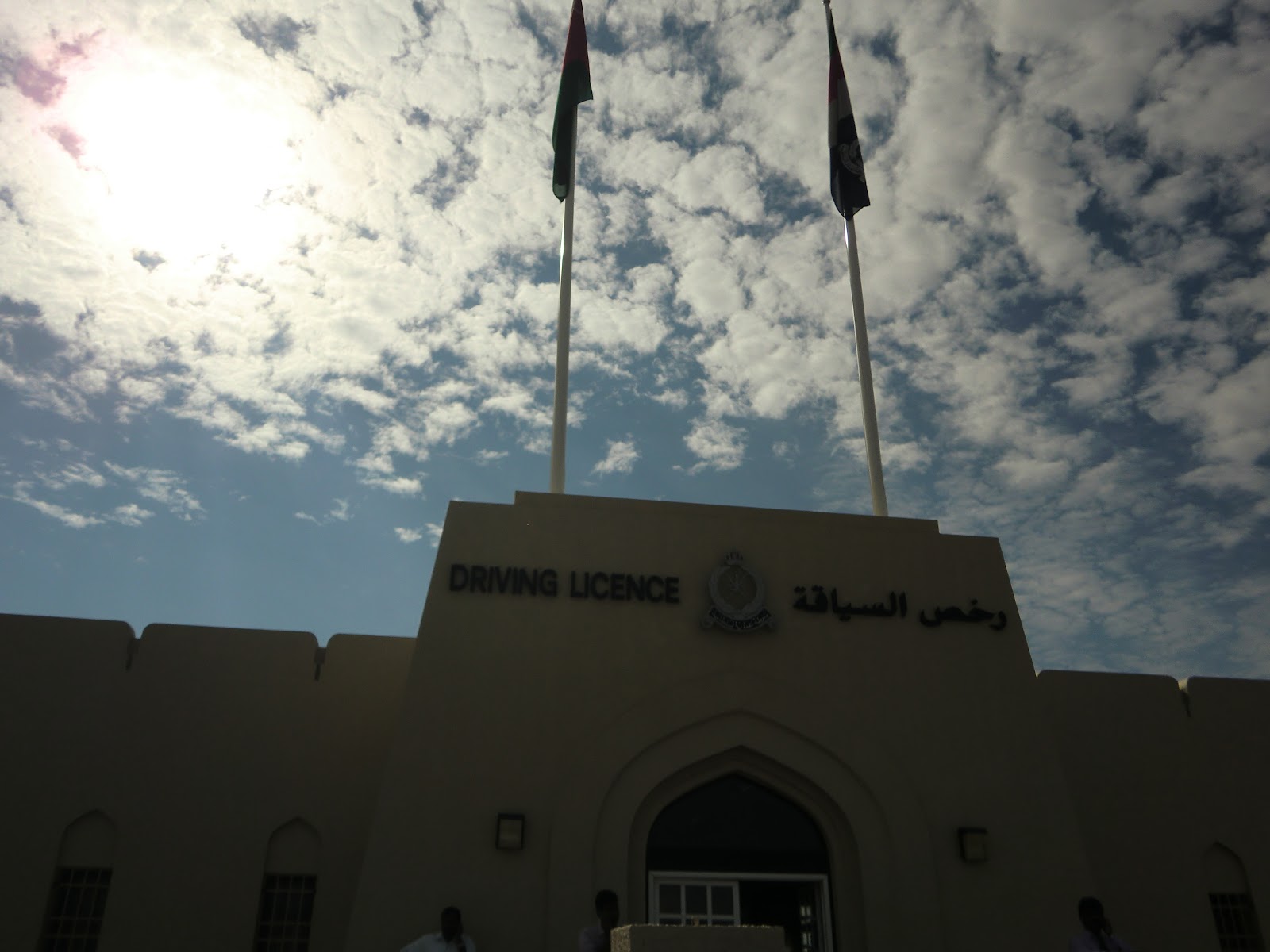 Anyway, another line and more paperwork.  But it should be an easy process. We sit and wait while Khalfon deals with the agency officials.  It seems that they were looking at my driver's license and frowning.  Uh oh.  Here's the deal.  My Illinois license had expired.  The state sent me a sticker to place on the back on the license, stating it was good for four more years.  It was valid until 2015, but the Omanis did not believe it.  Khalfan tells me they need a letter from the American Embassy, verifying my license is valid!

We are on a roll here, so we drop Austin off at school, and go to the Embassy.  I would have loved to  take pictures of the American Embassy in Muscat.  It was beautifully landscaped, sitting on the ocean, and the building is covered in flowers.  But there were several signs forbidding photography.  I figured no blog is worth jail time!  Joe and I park and walk into the embassy.  The small front room has an x-ray machine and several local guards.  They required two forms of ID.  Then they asked if we had an appointment.  Uh oh again.  We had to turn around and leave.  In case you were wondering, the American Embassy in Oman is very well protected.  So I got an appointment, came back the next day, paid my $50, and received a notarized letter stating that my Illinois license was valid. It took several more days for Khalfan to make it back to the driving license office, but I finally have my license!

As Americans, it is relatively simple to get an Omani driver's license.  You just have to fill out the correct forms and have a valid driver's license issued at least six months earlier.  I didn't have to take a written test or a driving test.  Thank God!  I have heard of people taking the test one to two dozen times, and still not passing.

Well, I am going off for a drive now.