SPRING BREAK!  If we were back in Chicagoland, we would have driven to Texas for spring break.  That was our normal routine.  But here is a truth about expat life.  People travel for spring break.  Not that they didn't in the US, but here they really travel.  Some of the places my friends in Oman visited included South Africa, Budapest, London, The Seychelles, Istanbul, and Malaysia.  We wanted our older children still living in the US to meet us, so we needed a place to meet, in the middle.  Austin mentioned that he wanted to see the Colosseum, so Italy it was! 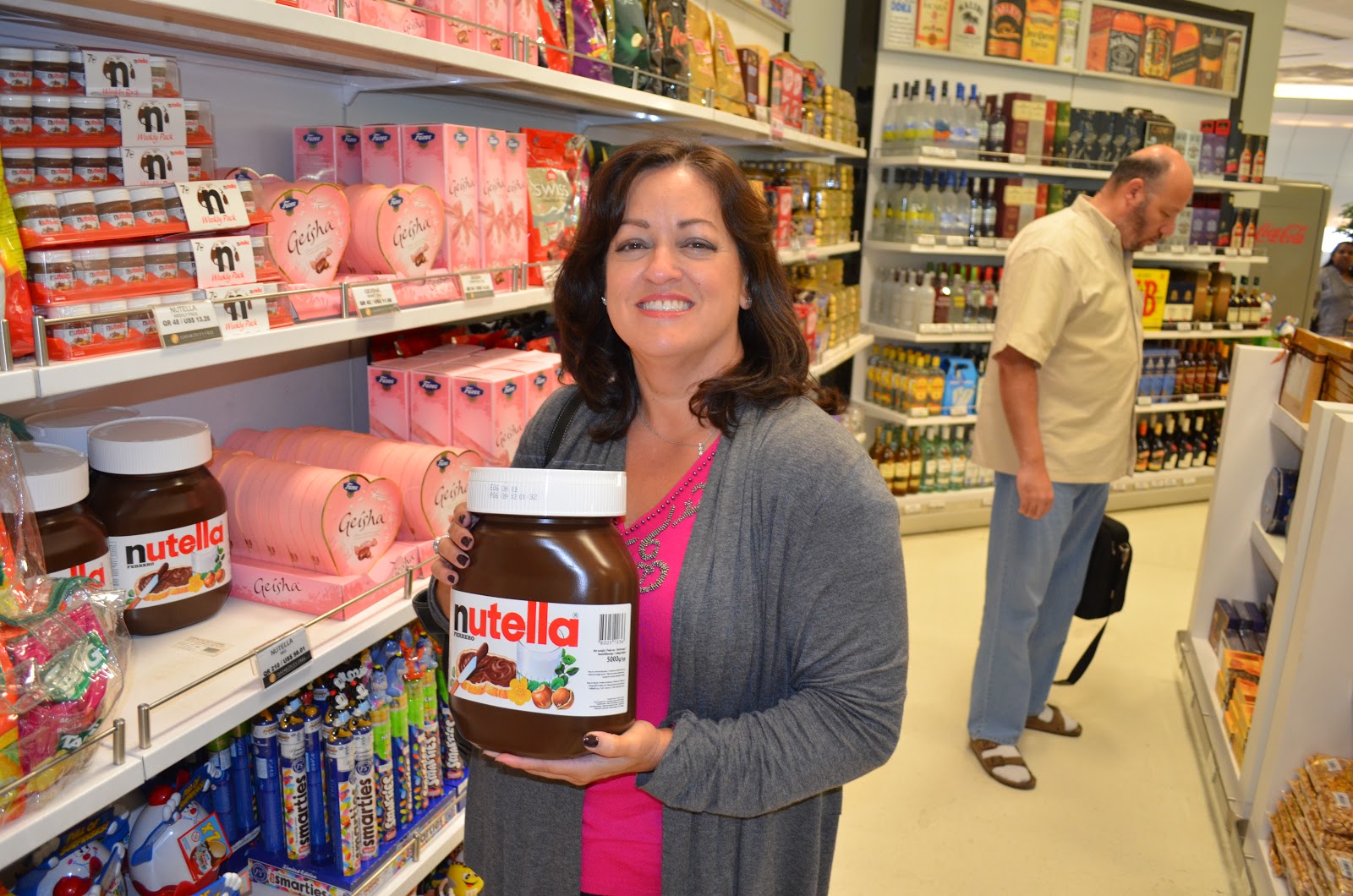 No, this was not Italy.  This was at the airport in Doha, Qatar, where we had a layover.  Now a lot of you know that I have a special place in my heart (and my thighs) for Nutella.  This was the biggest jar I had ever seen!!  About $50 worth.  Anyways, the funny thing is that we saw a jar of Nutella this size in just about every gelato place we went to.  I love Italy!  :)
﻿ 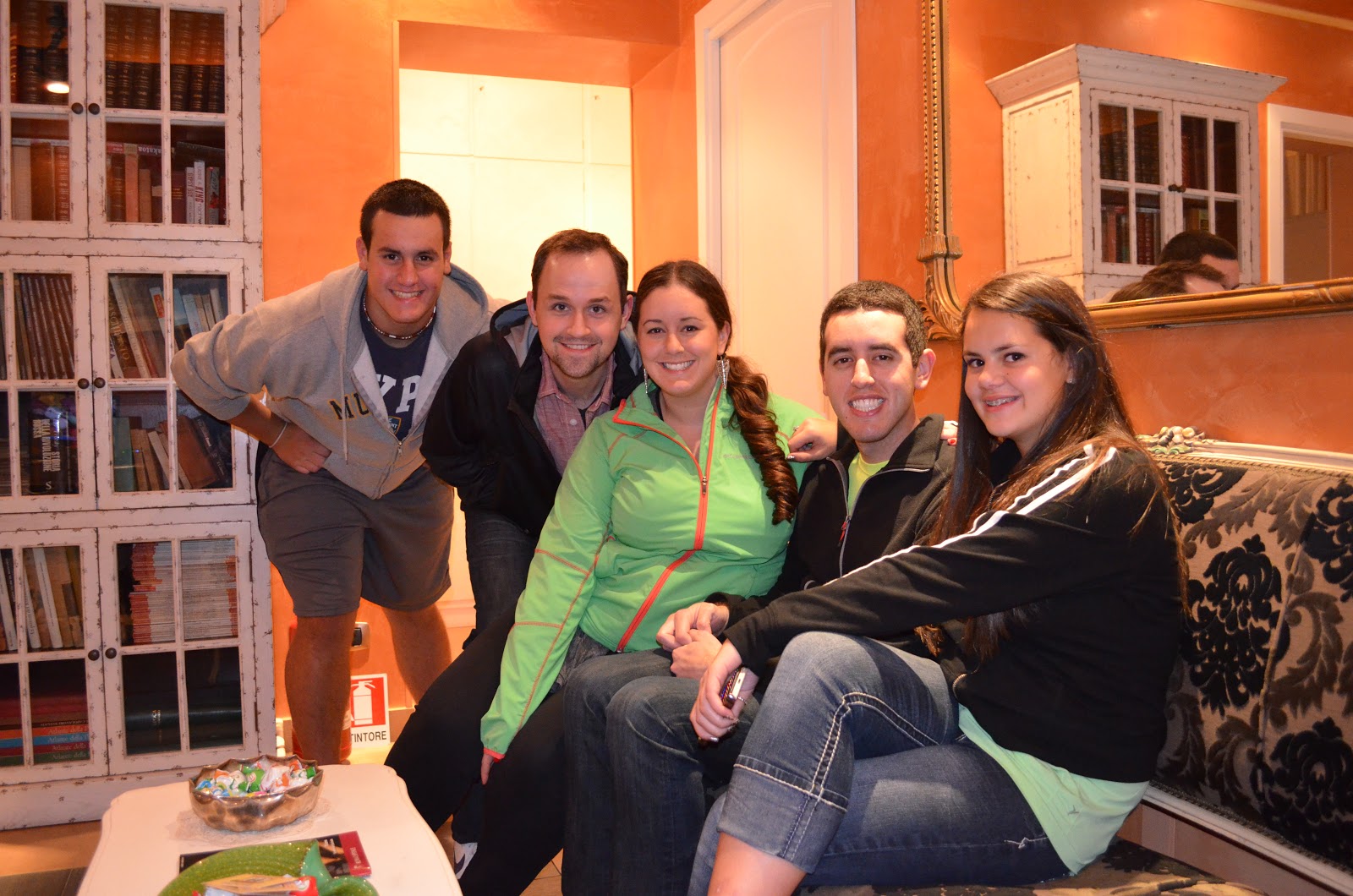 I could pretend this picture was just of the very cute Bed and Breakfast we stayed at, but I would be lying.  This picture is of my beautiful kids.  Left to right-- son Austin (15), son-in-law Seth, daughter Amanda (27), son Jared (25), and my baby Savannah (14).  I will try to make these posts of Italy not look like a family album, but it will be hard.
﻿ 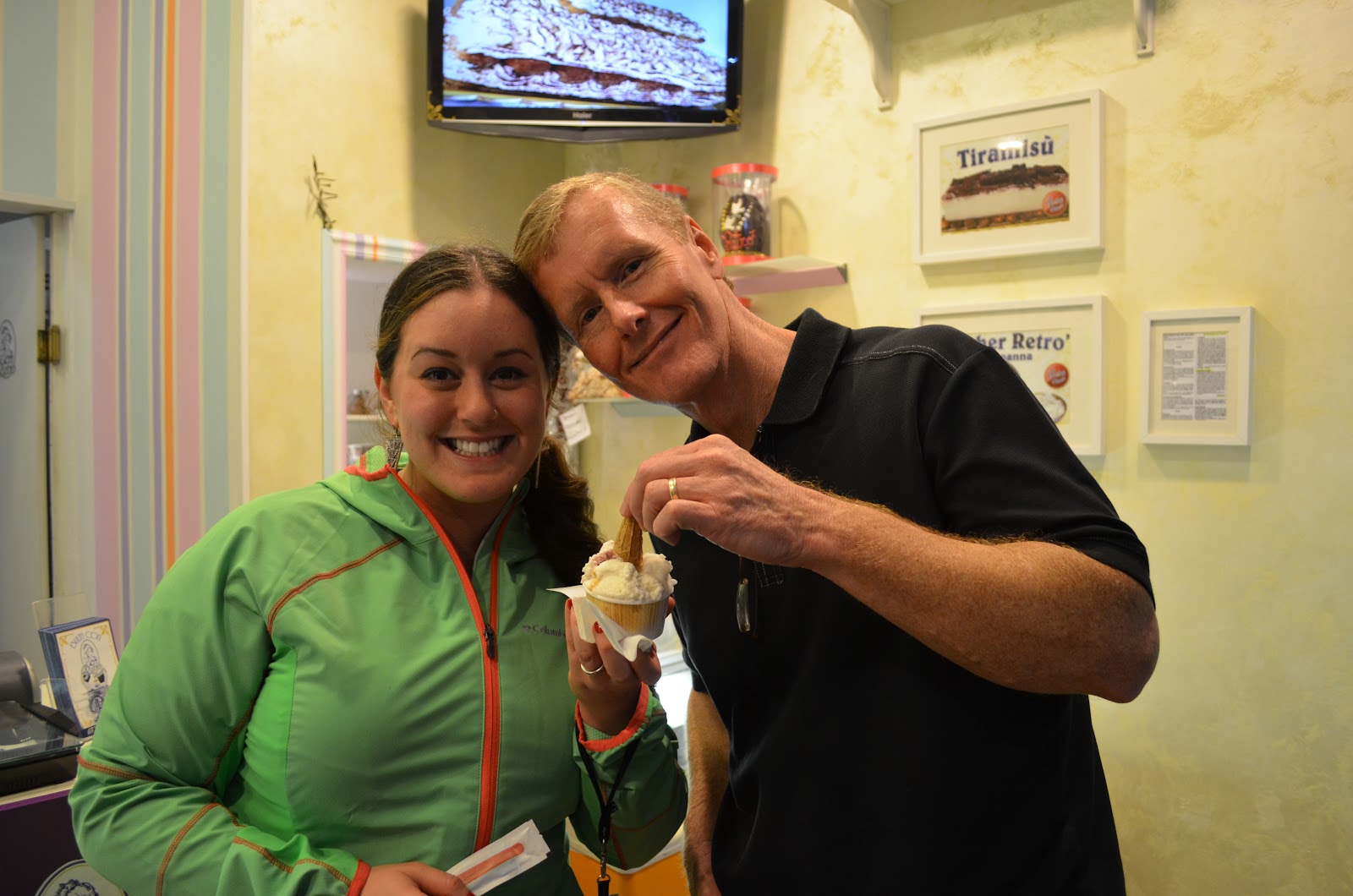 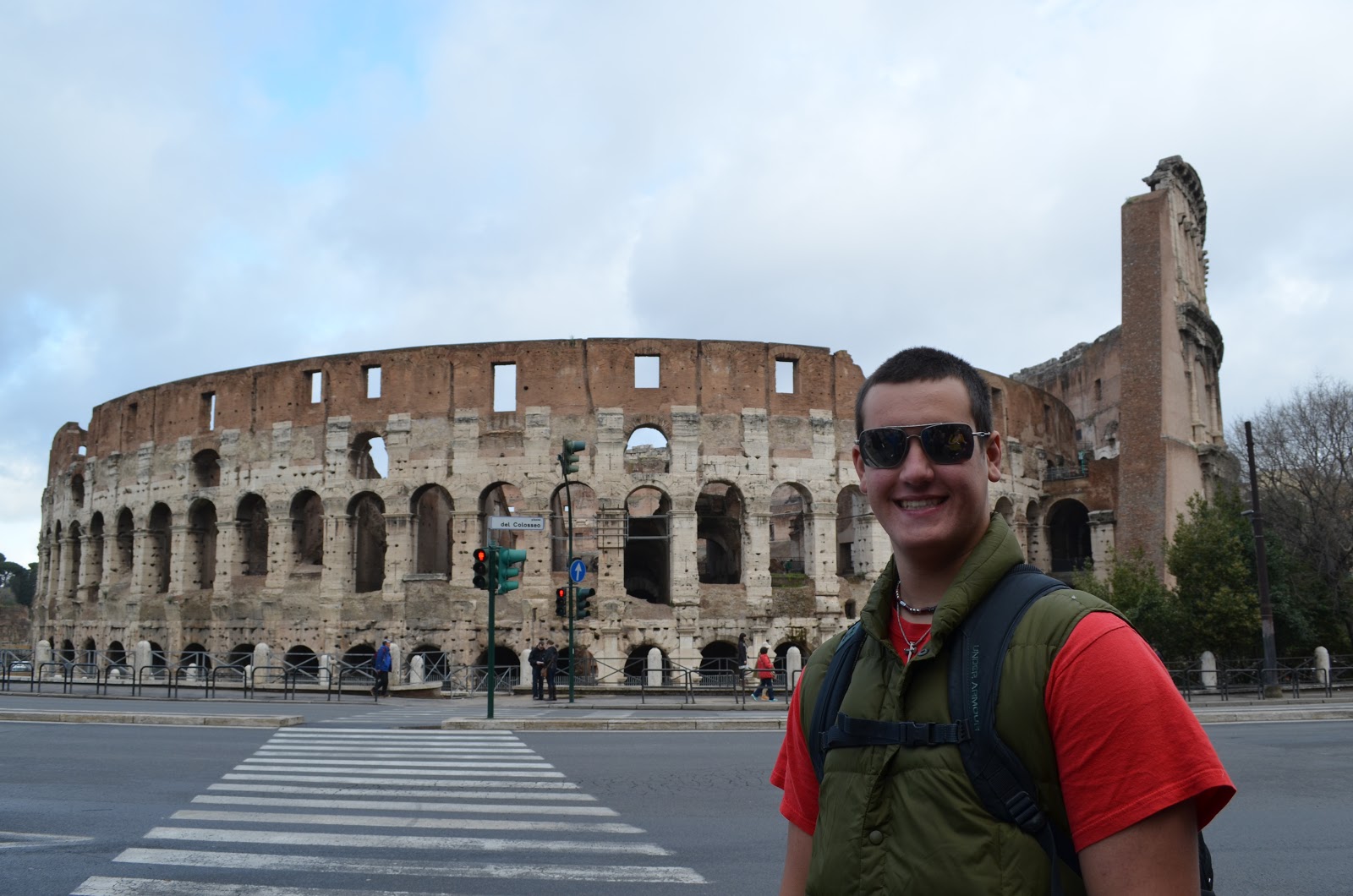 Well, Austin wanted the Colosseum, and that was our very first place to visit.
﻿ 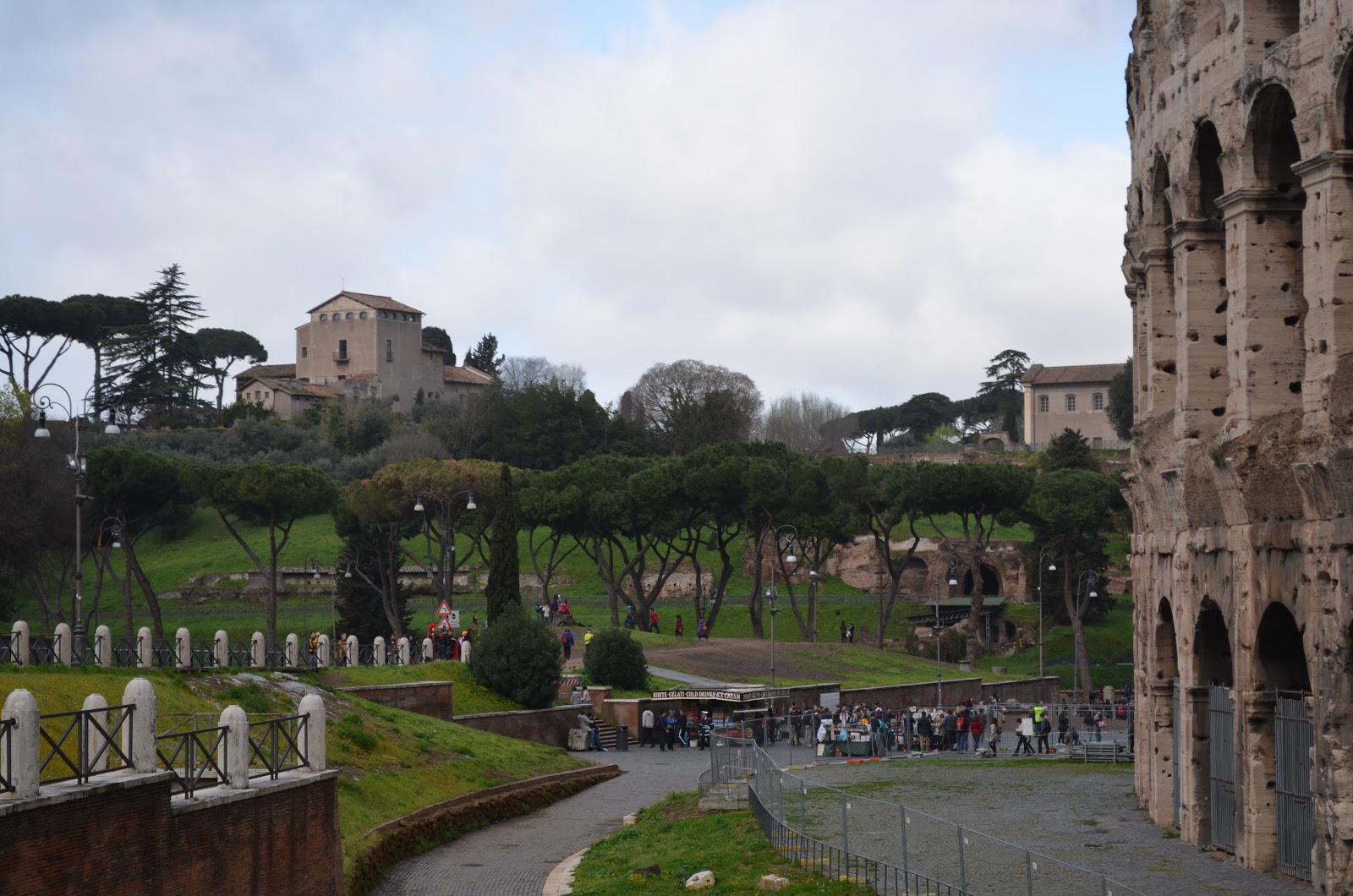 The grounds around the Colosseum
﻿ 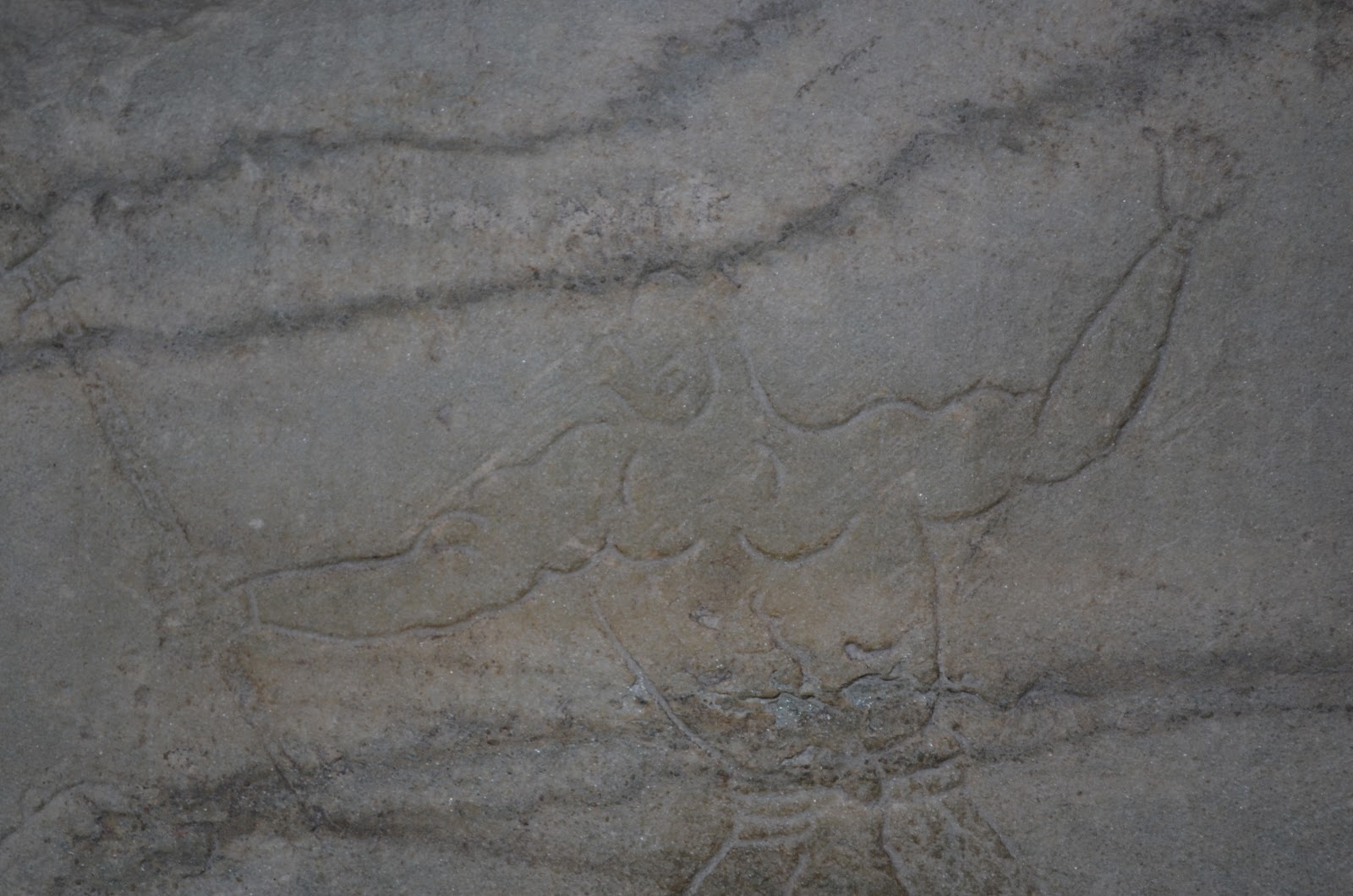 This is ancient graffiti.  Spectators would carve pictures of the gladiators in the seats, along with whether or not they lived. 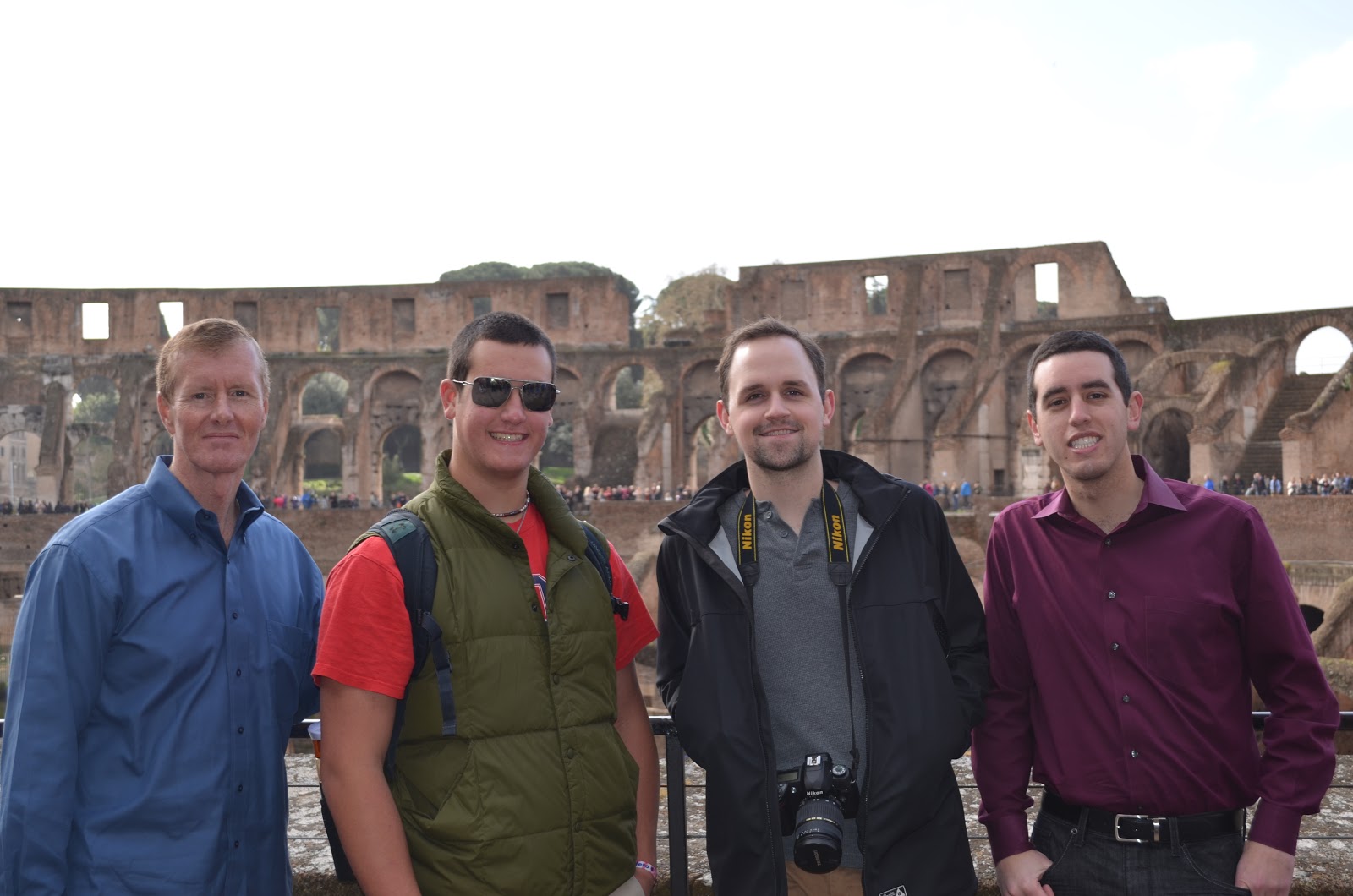 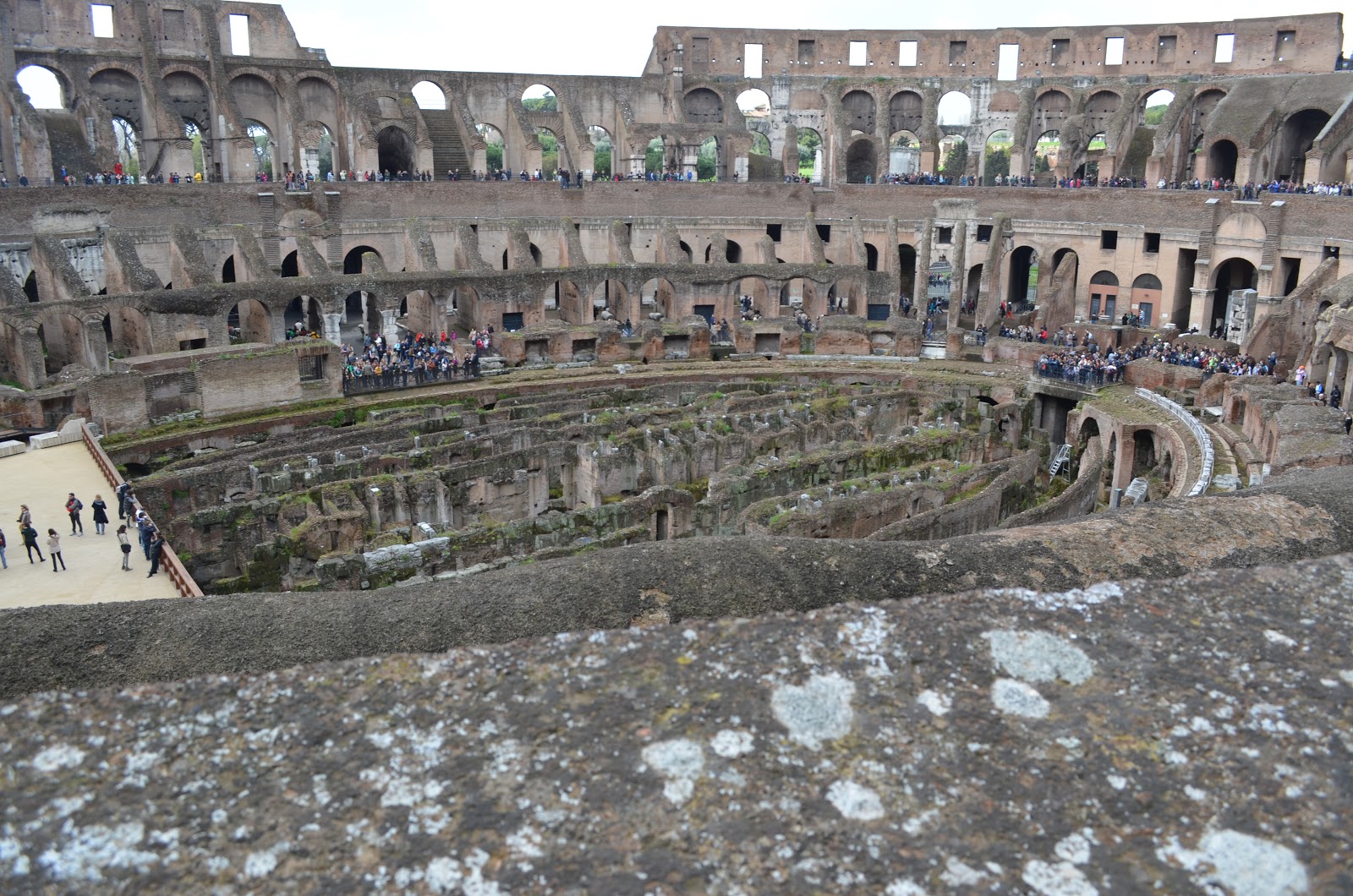 The deck you see on the left, where the people are standing, is where the floor would have been.  It would have covered up all the corridors and rooms seen below.
﻿ 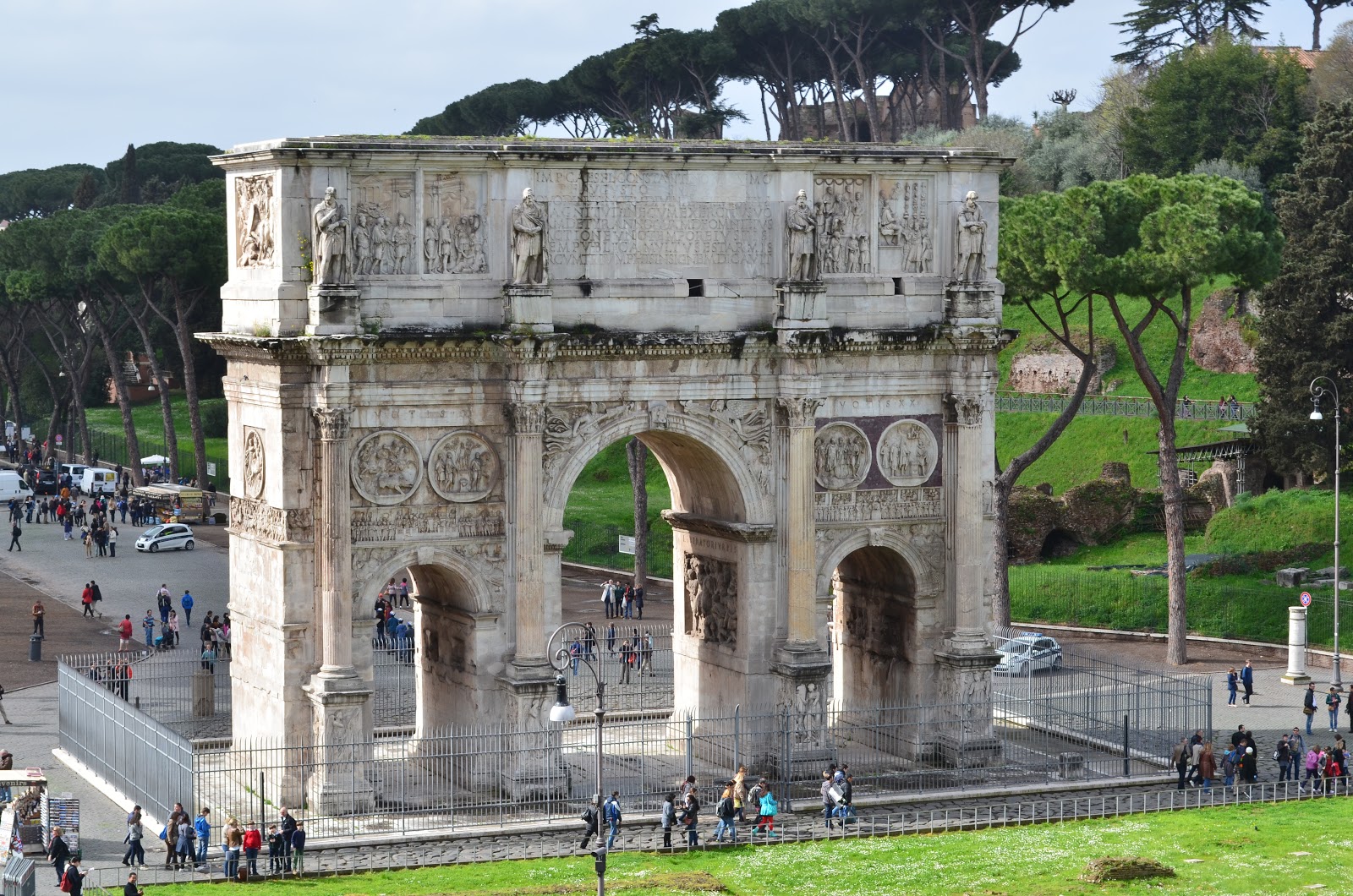 Our tour that morning was called Ancient Rome.  It started with the Colosseum, and then went to the surrounding area.  This is the Arch of Constantine.  It marks the military coup that made Christianity mainstream, in A.D. 312.
﻿ 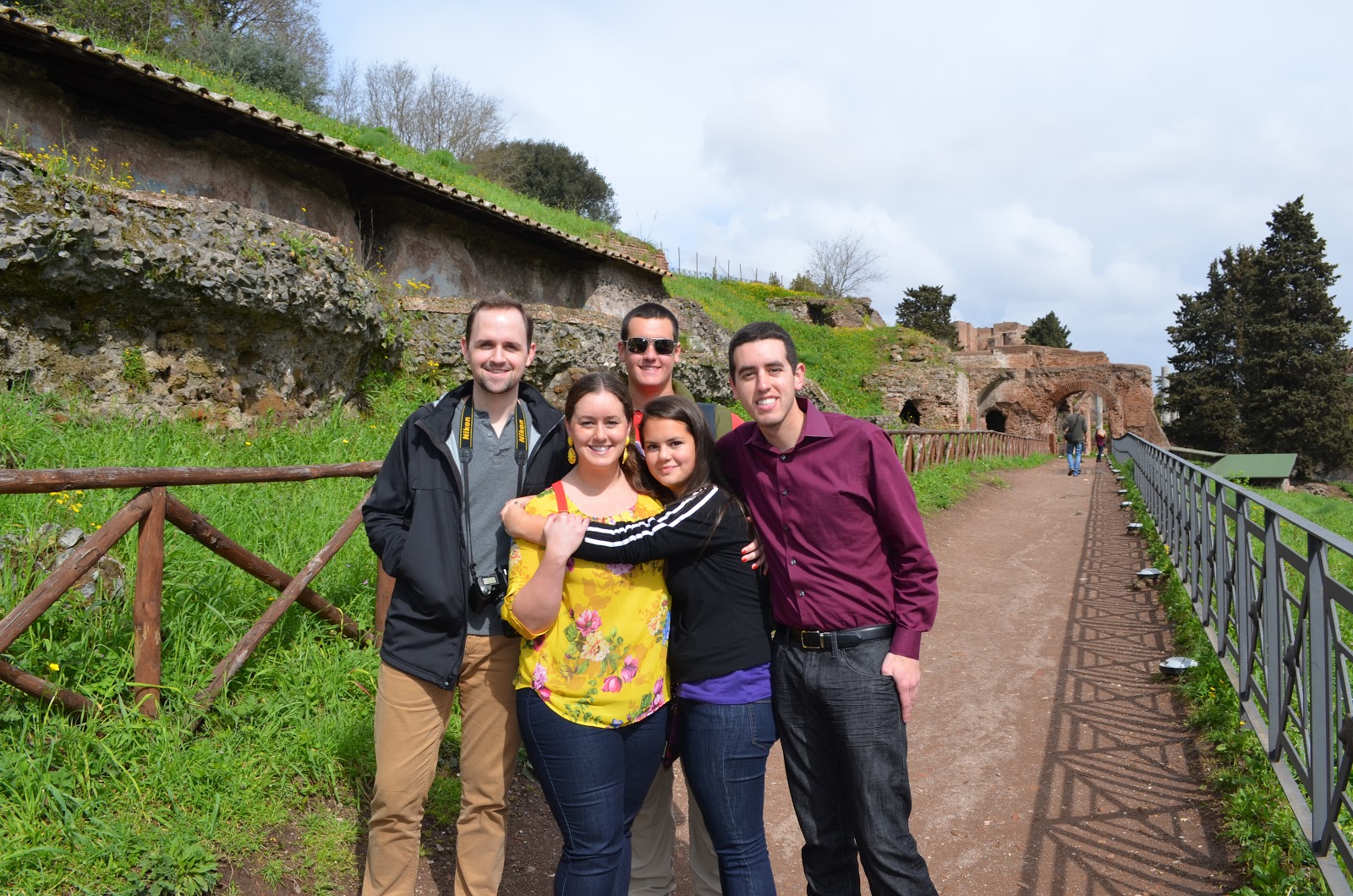 A Funny Thing Happened on the Way to the Forum...
﻿ 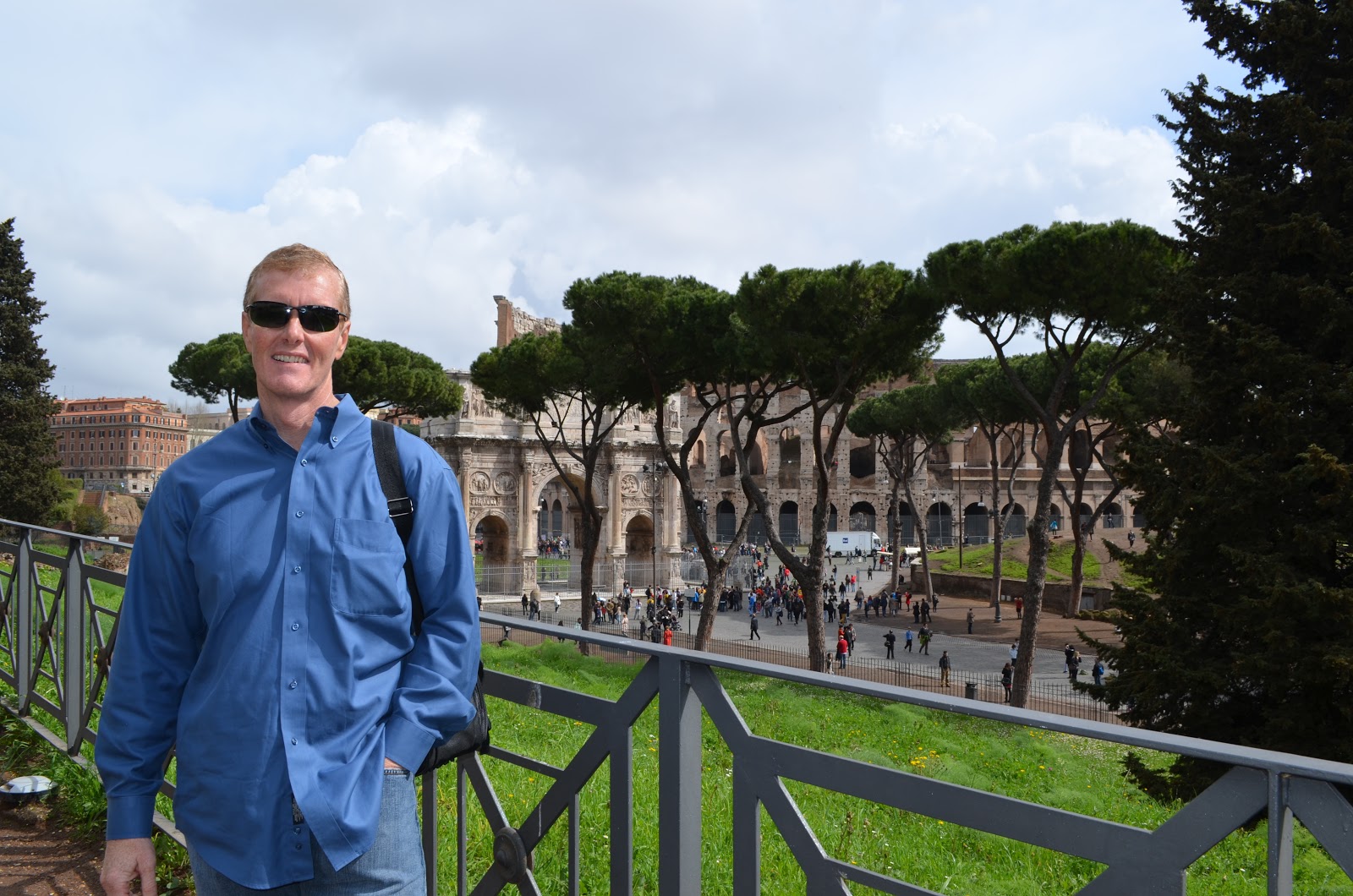 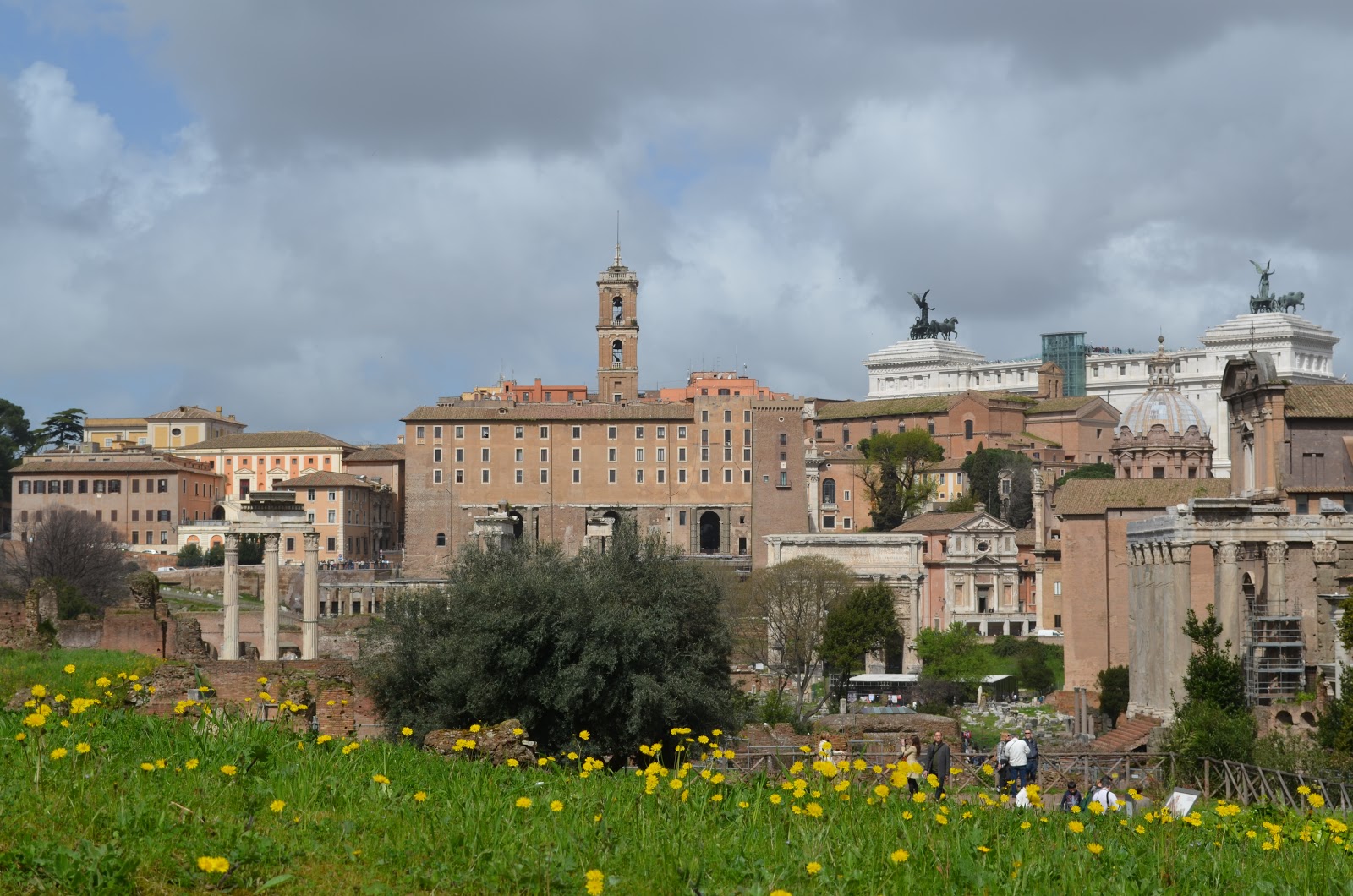 Sooo much incredible history in this small area.  We are close to the Forum.
﻿ 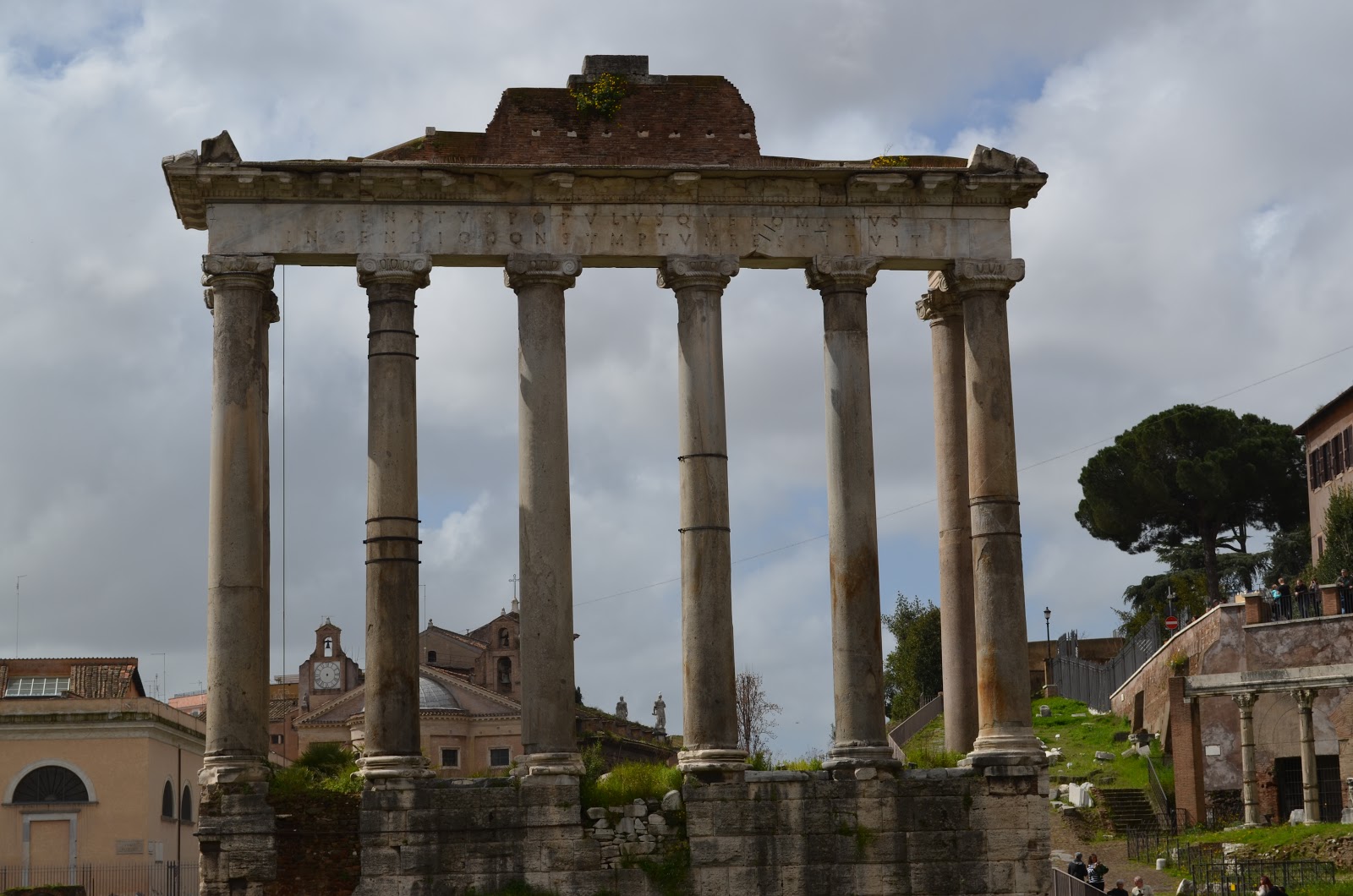 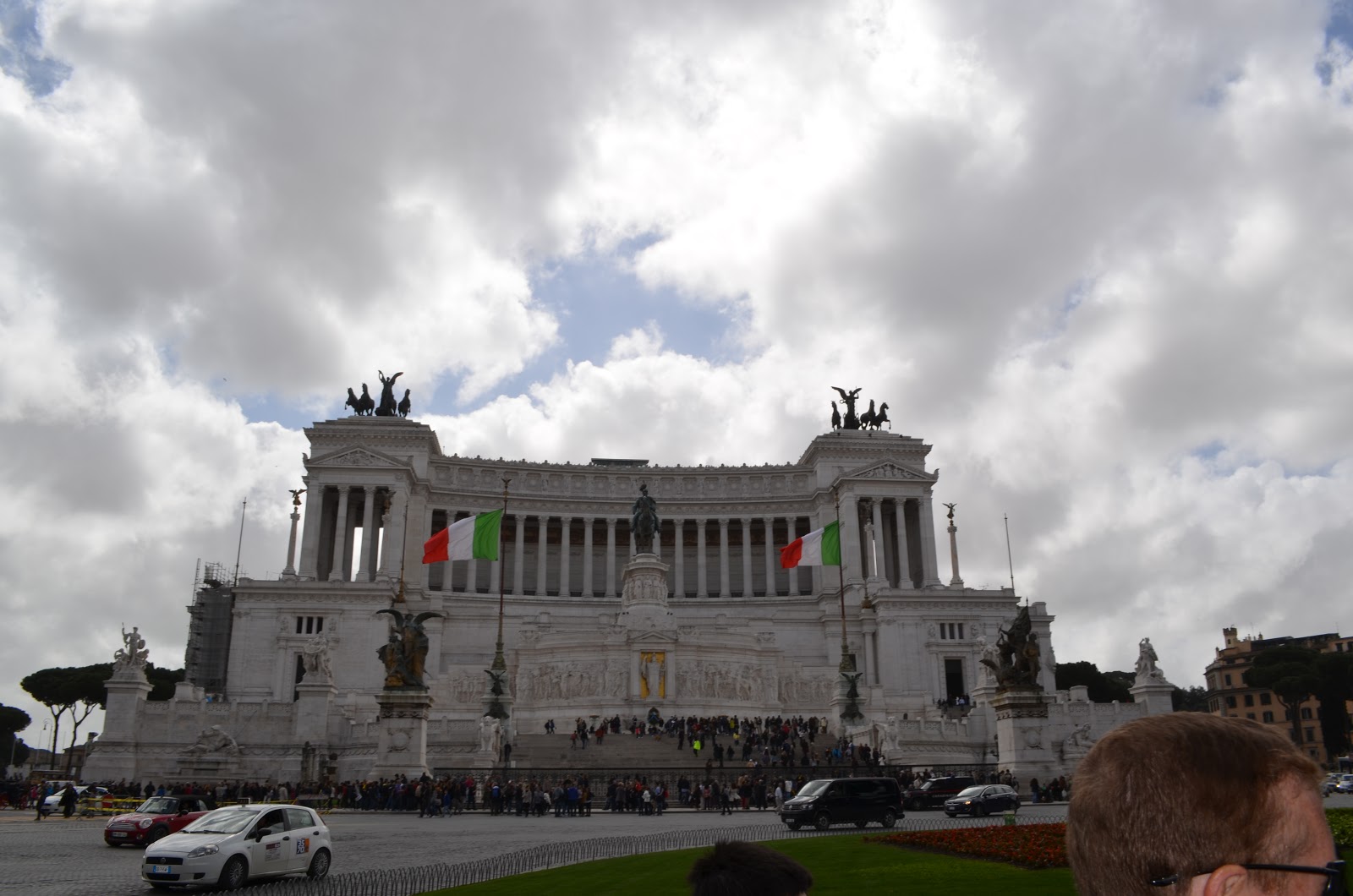 The Victor Emmanuel Monument to Italy's first king was built to celebrate the 50th anniversary of Italy's unification in 1861.  Our guide was not fond of this place.  It blocks the view of the Colosseum and ancient Rome behind it.
﻿ 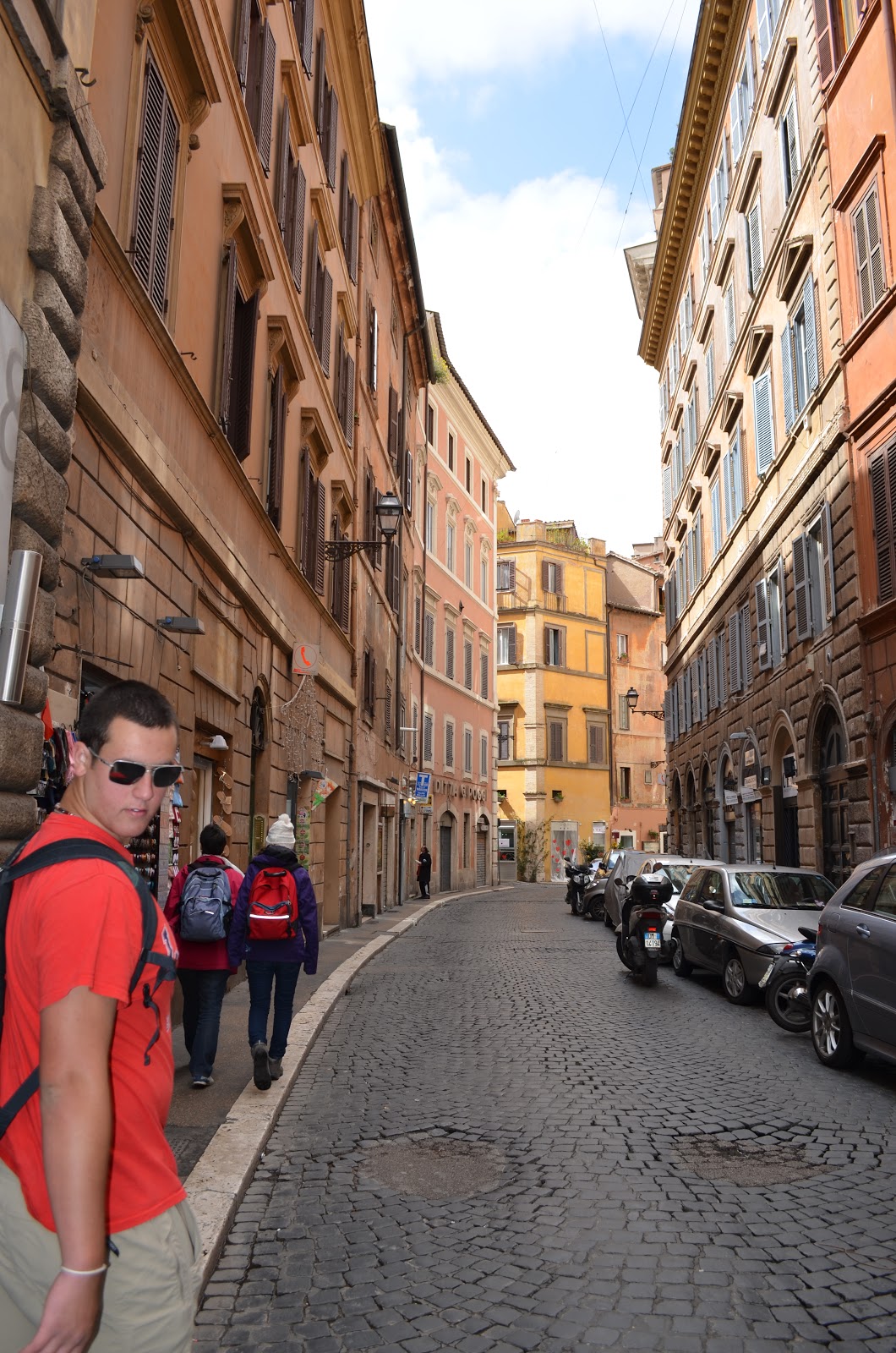 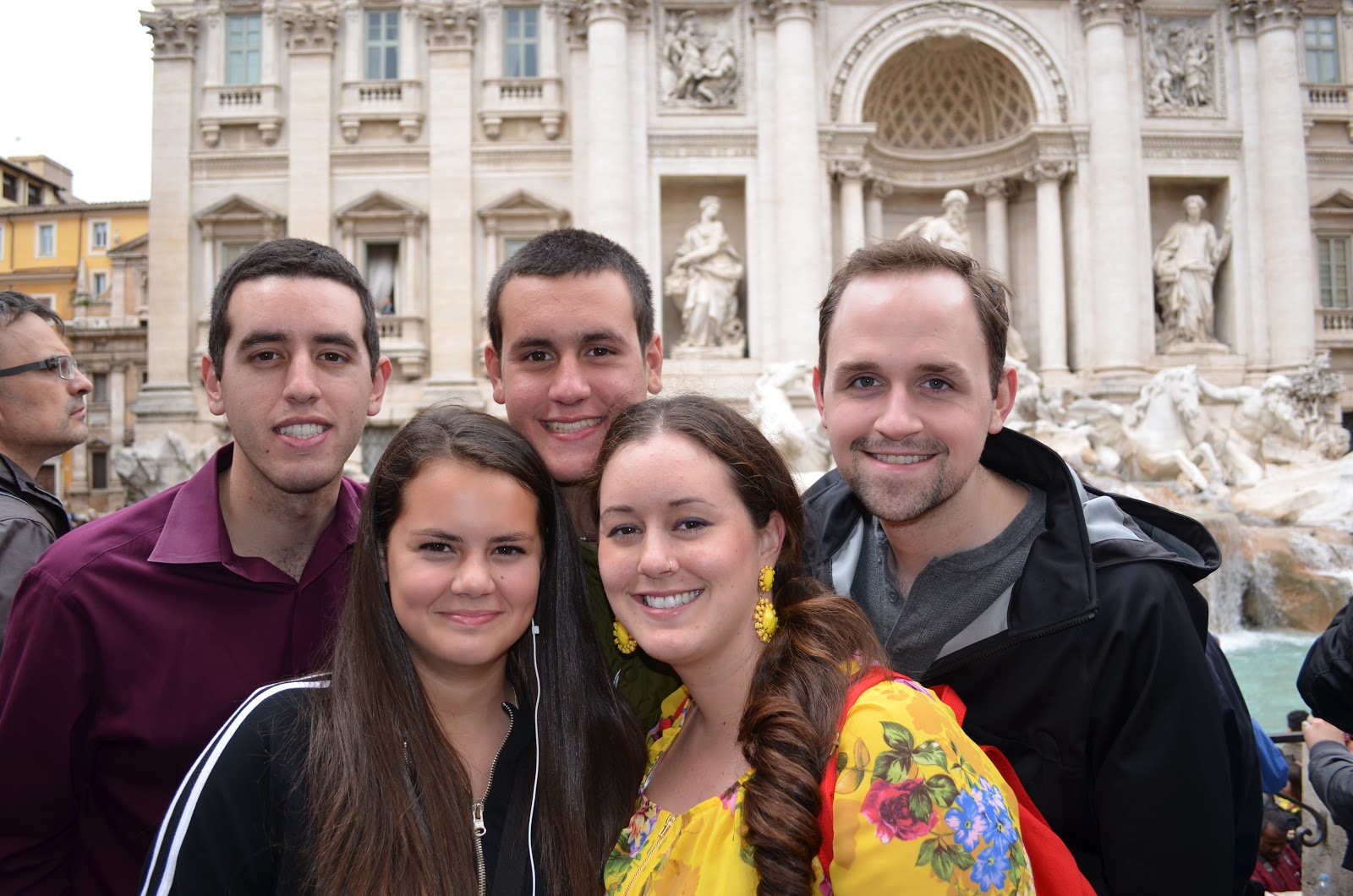 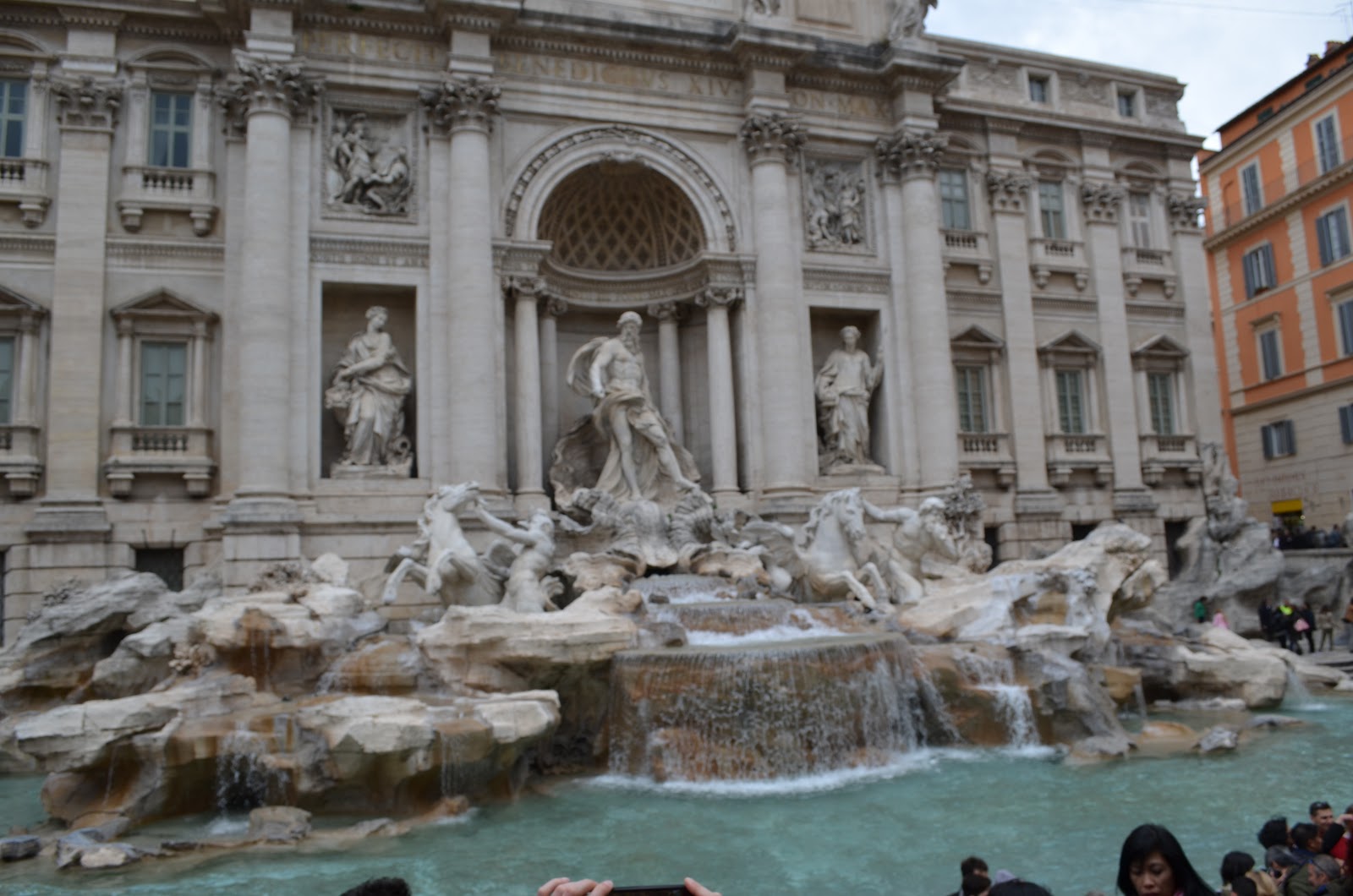 Um, the Trevi Fountain, in case you really care about an unblocked view.
﻿ 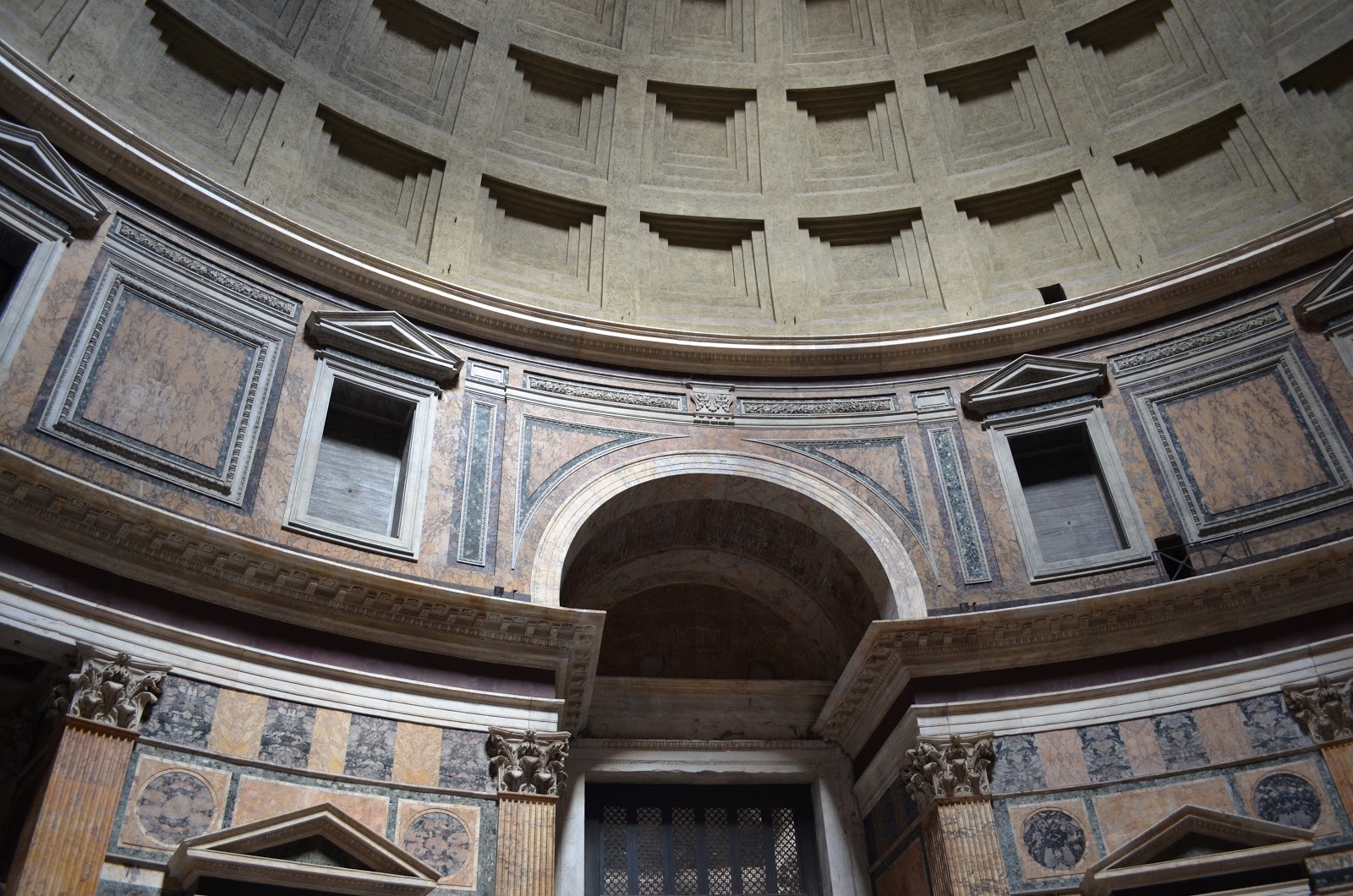 The Pantheon!  I have no pictures that begin to do this justice.  It was built 2000 years ago!  This domed temple served as the model for Michelangelo's dome in St. Peter's and many others.  BTW, all these fun facts come from Rick Steve's Italy.
﻿ 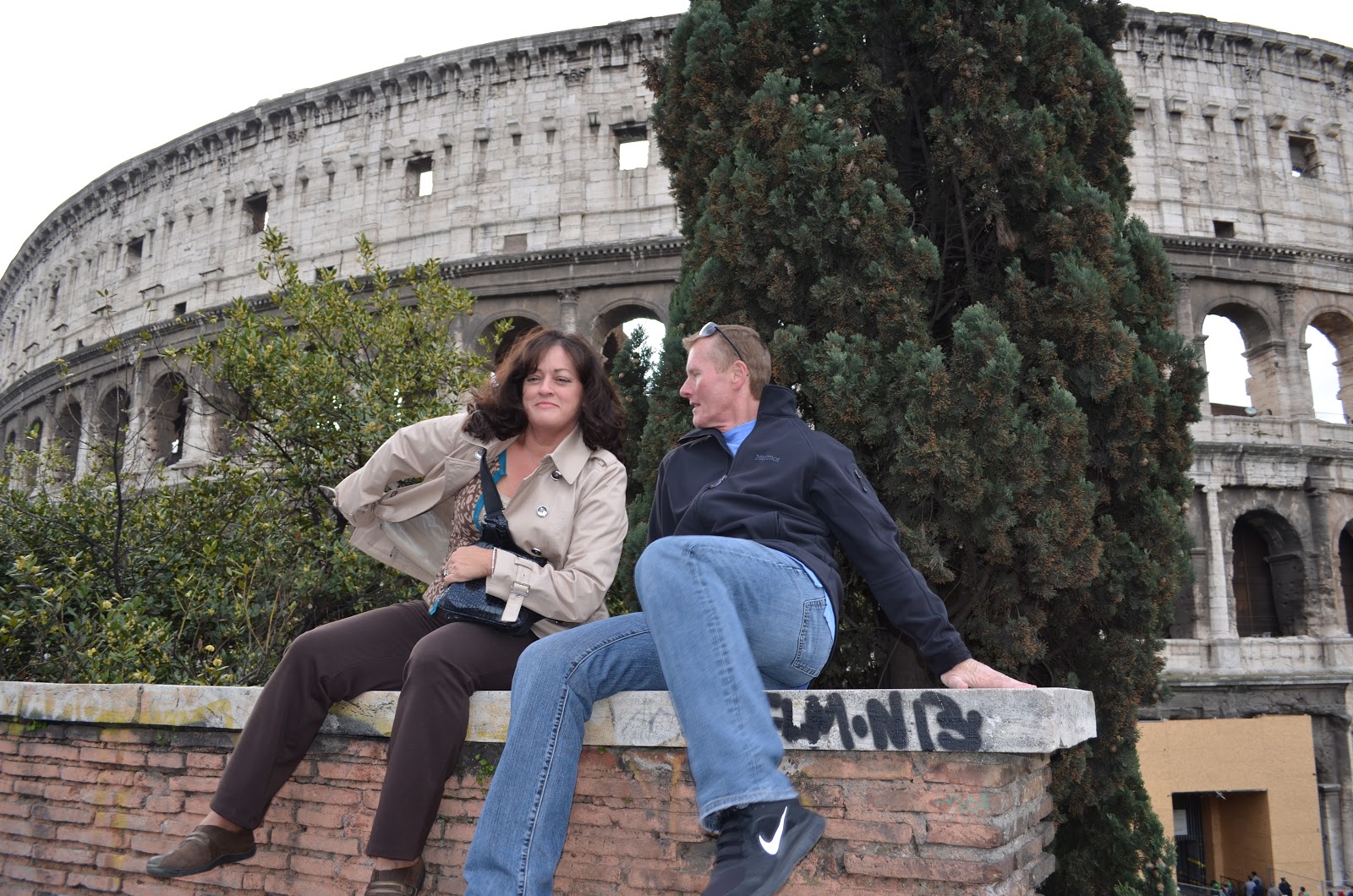 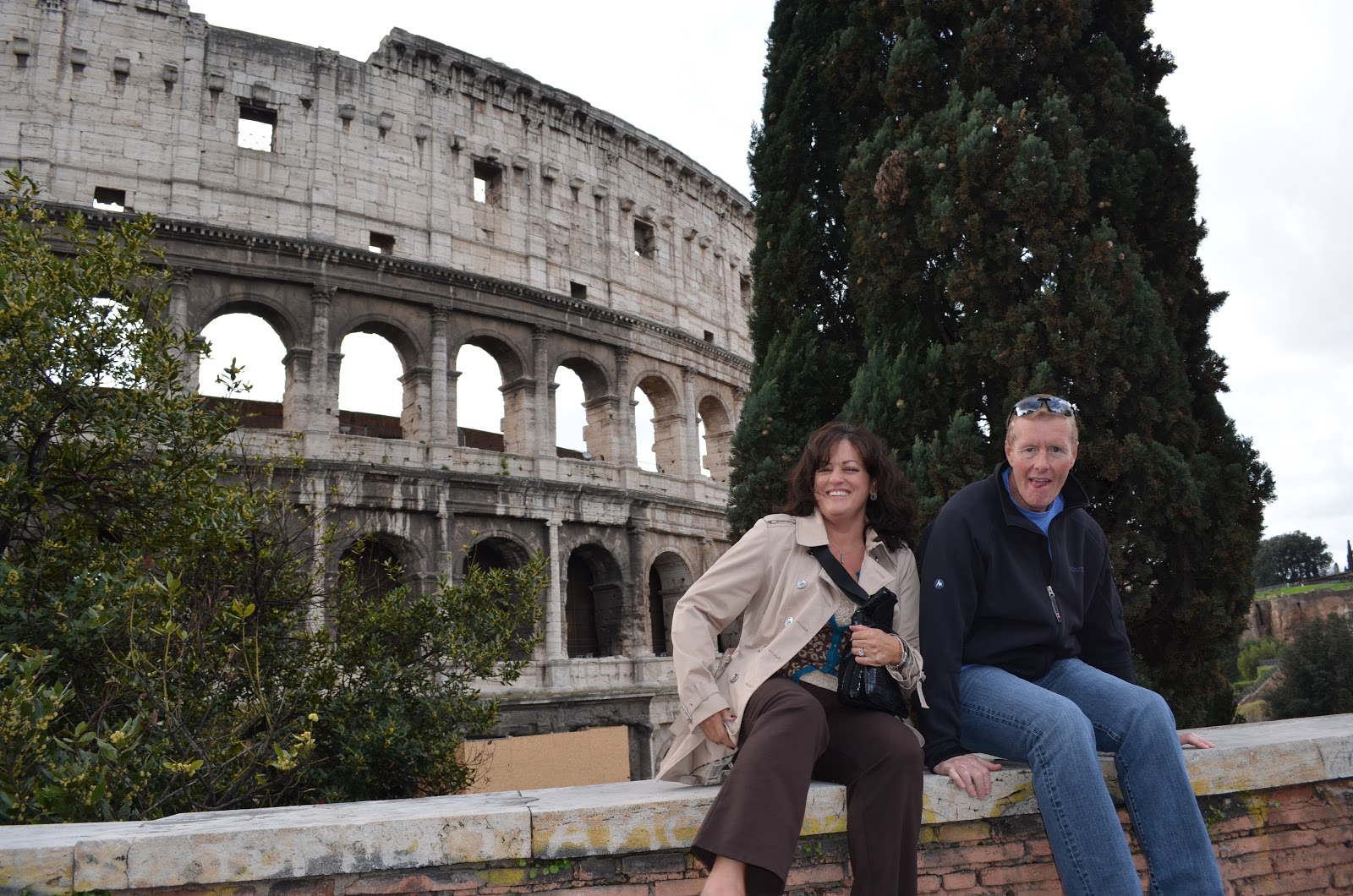 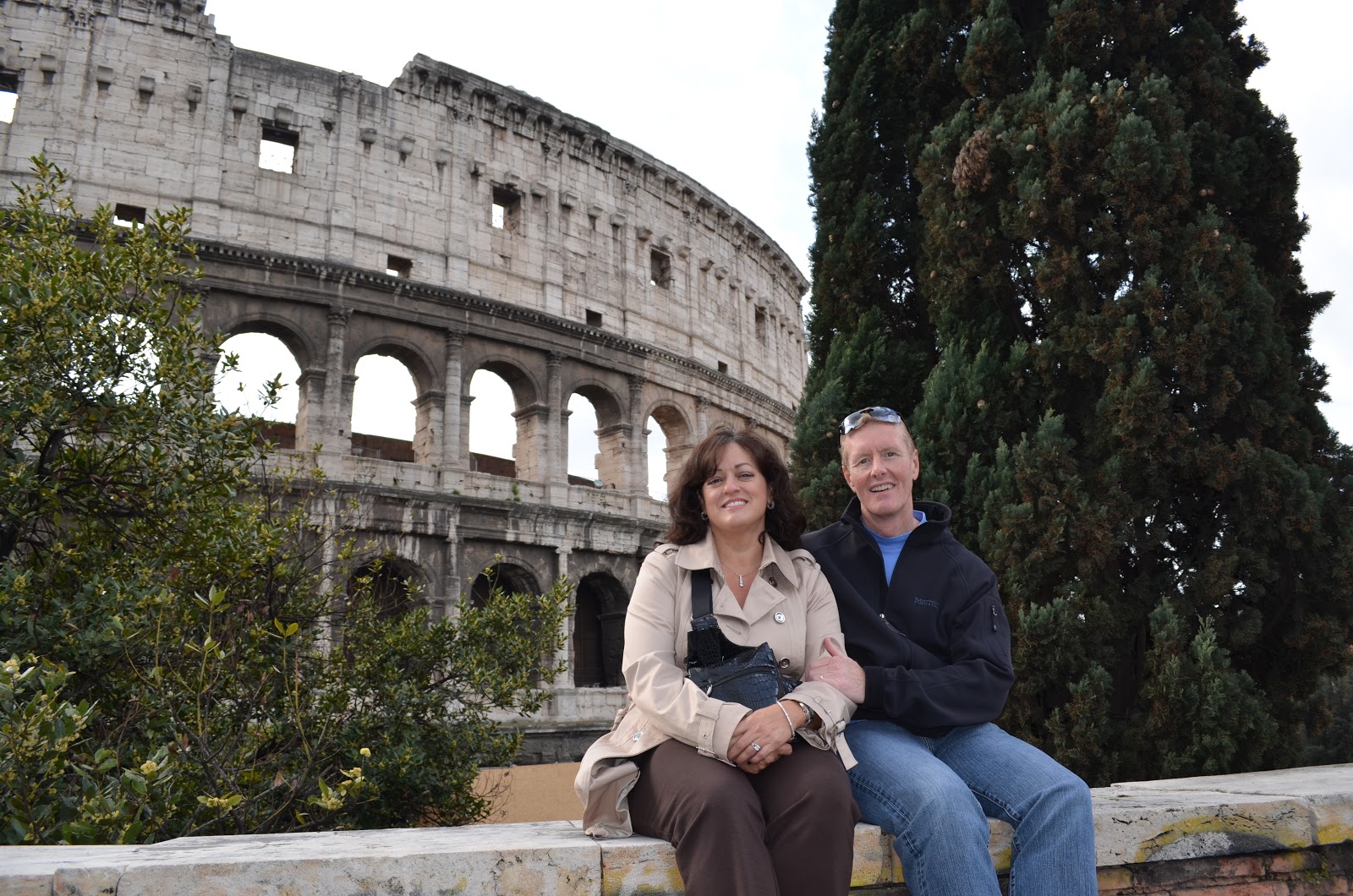 We found ourselves walking by the Colosseum on our second day.  Just letting you see that posing is real work!  :)
﻿ 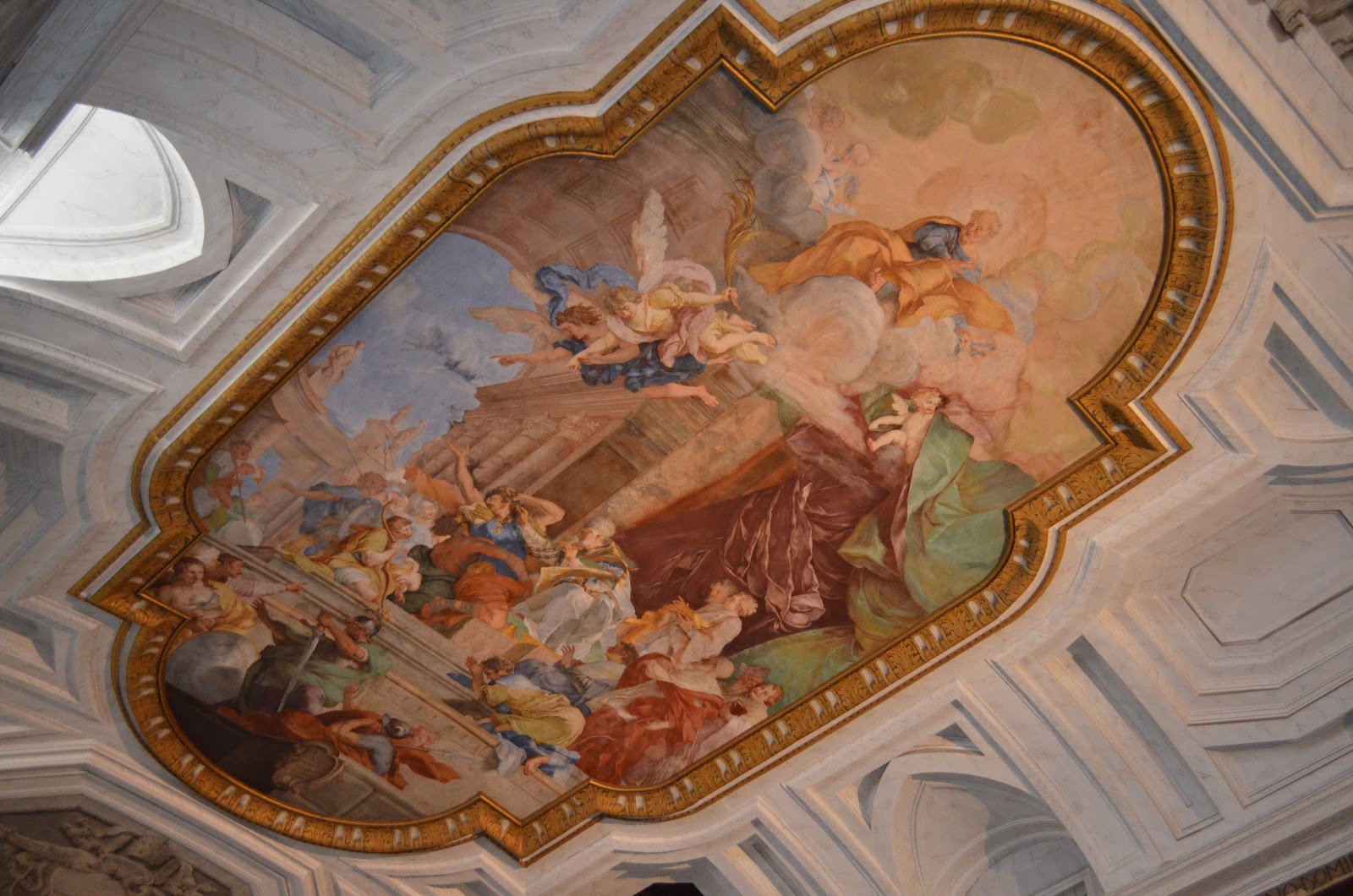 I love painted ceilings!  Of course Rome has lots and lots of them.  This is St. Peter-in-Chains Church.  This fifth century church is home to the chains that held St. Peter.  But it is more famous for the following statue.
﻿ 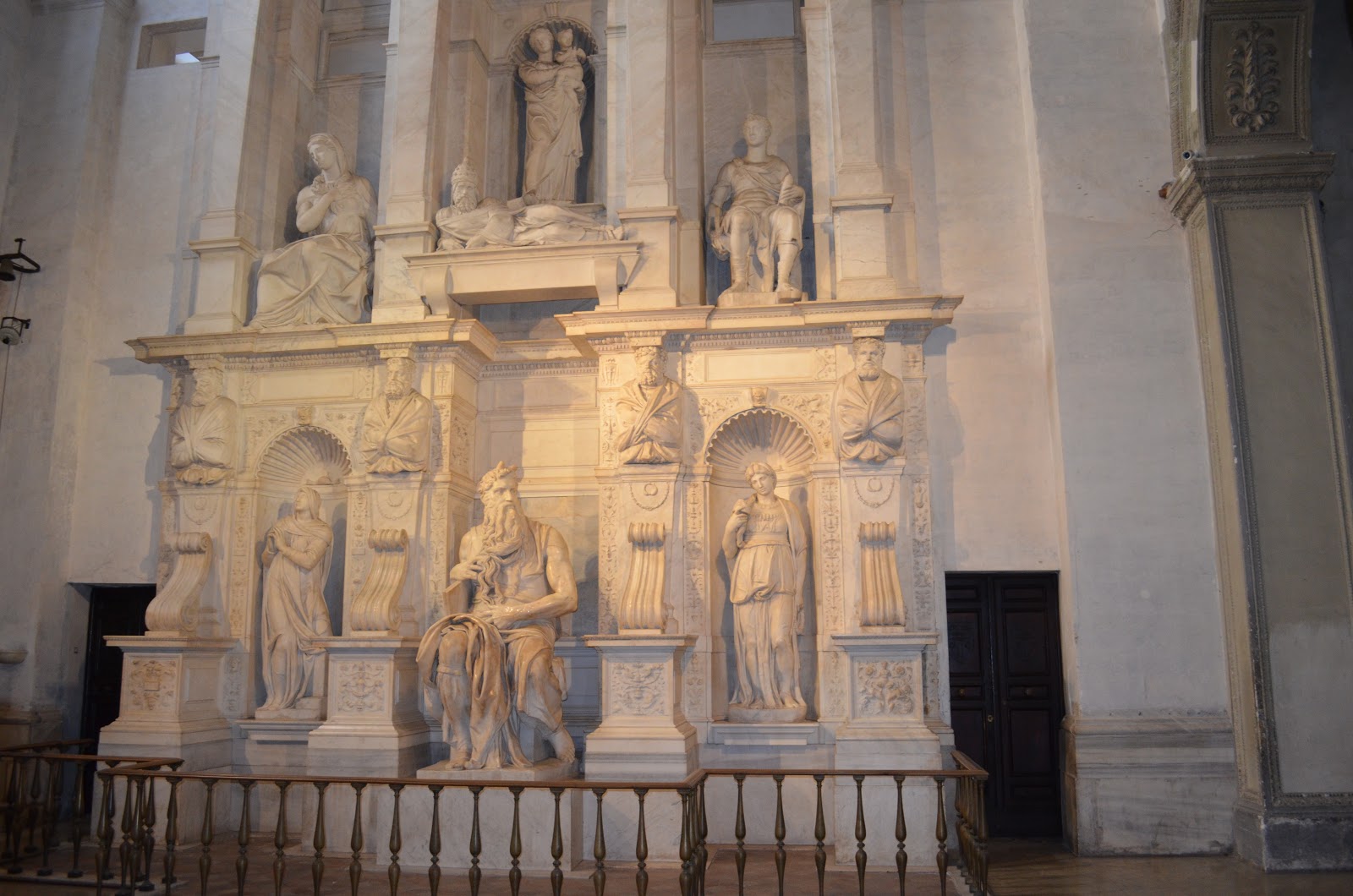 Here is Michelangelo's Moses.  It is the only work of Michelangelo that we saw that was actually allowed to be photographed.
﻿ 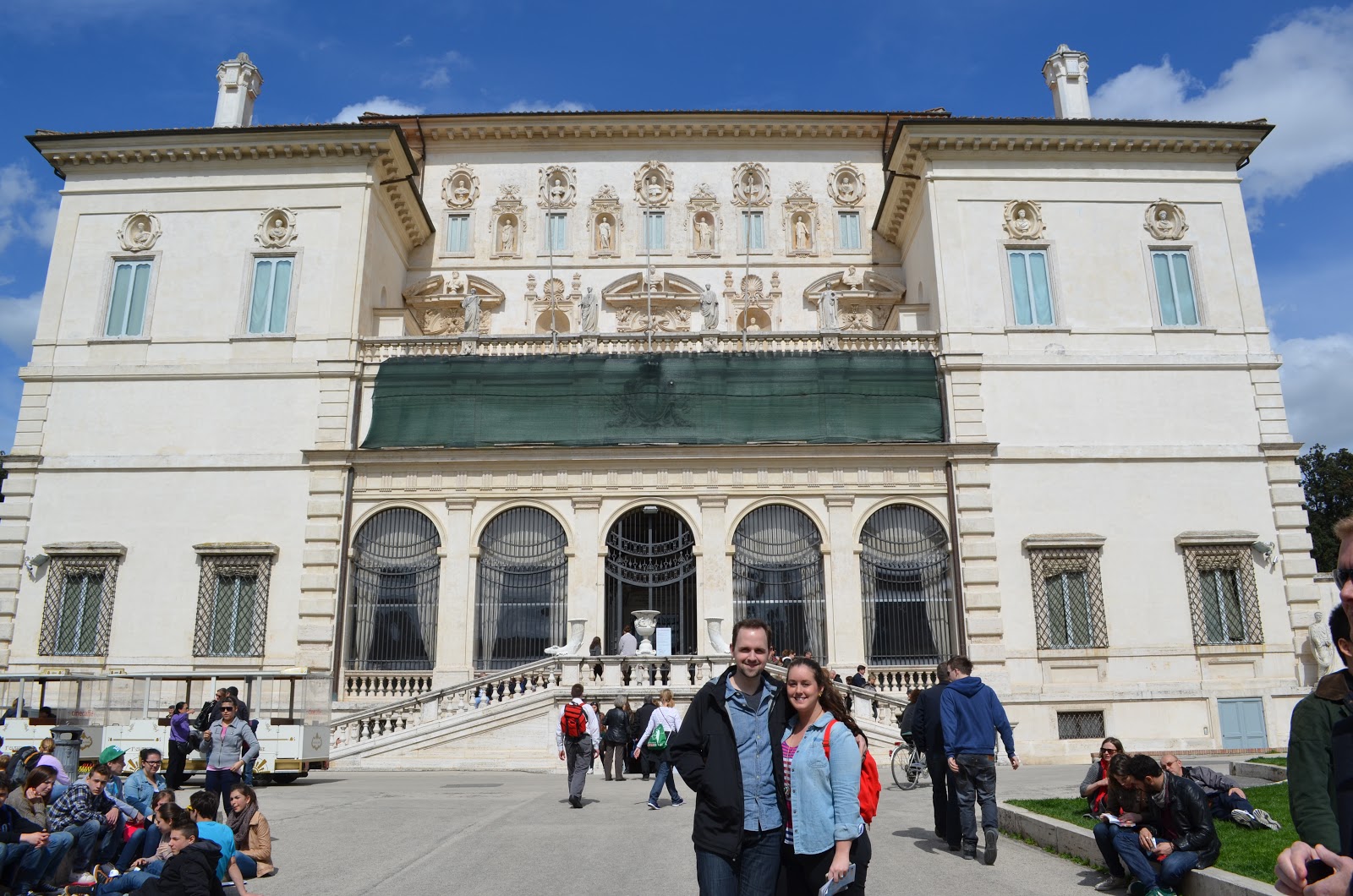 Seth and Amanda in front of the Borghese Gallery, not to be missed!  Be sure and make reservations in advance.  When we were there, the gallery was totally booked for days.  Incredible art.
﻿ 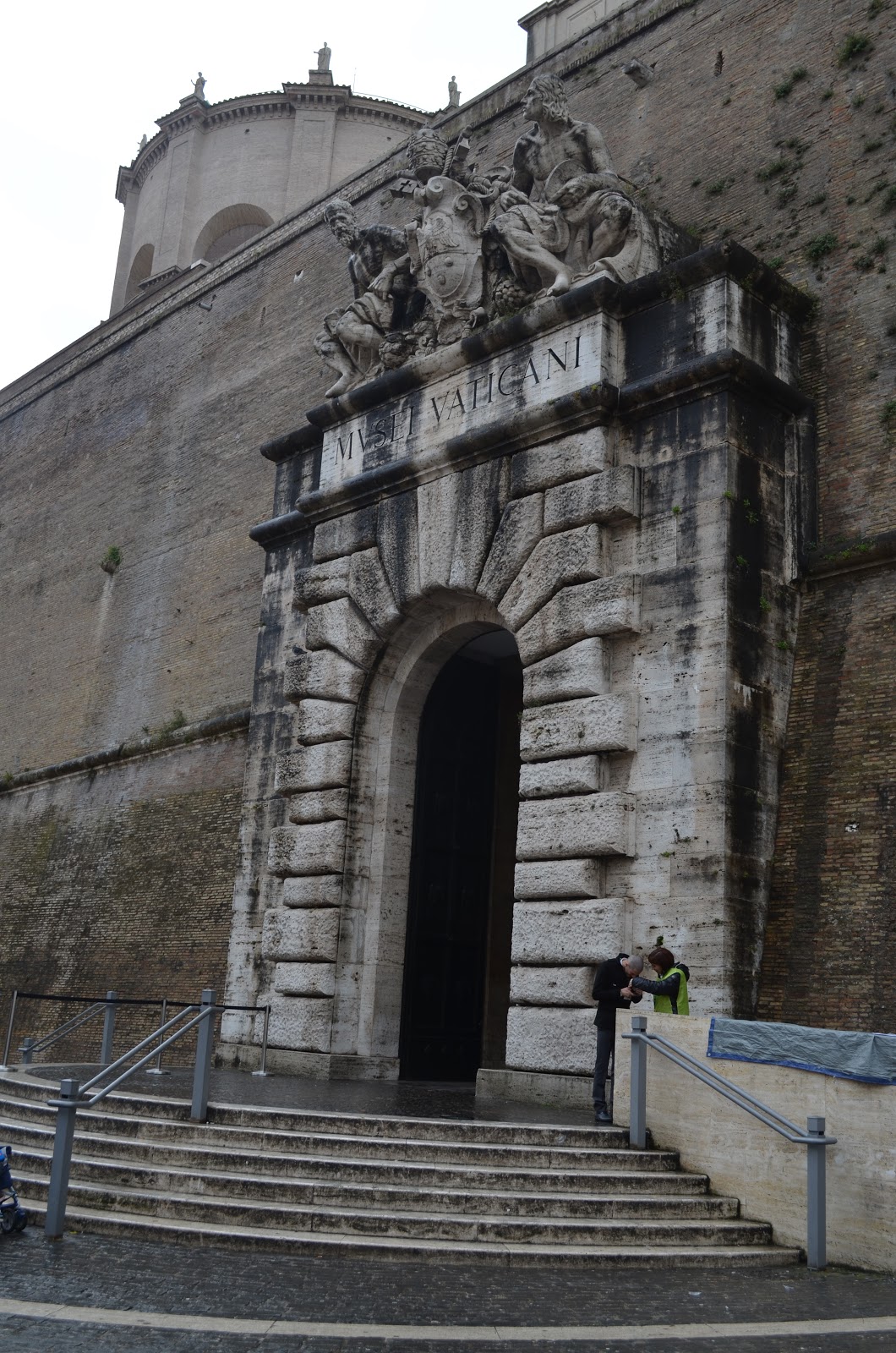 One of the entrances to the Vatican City.
﻿ 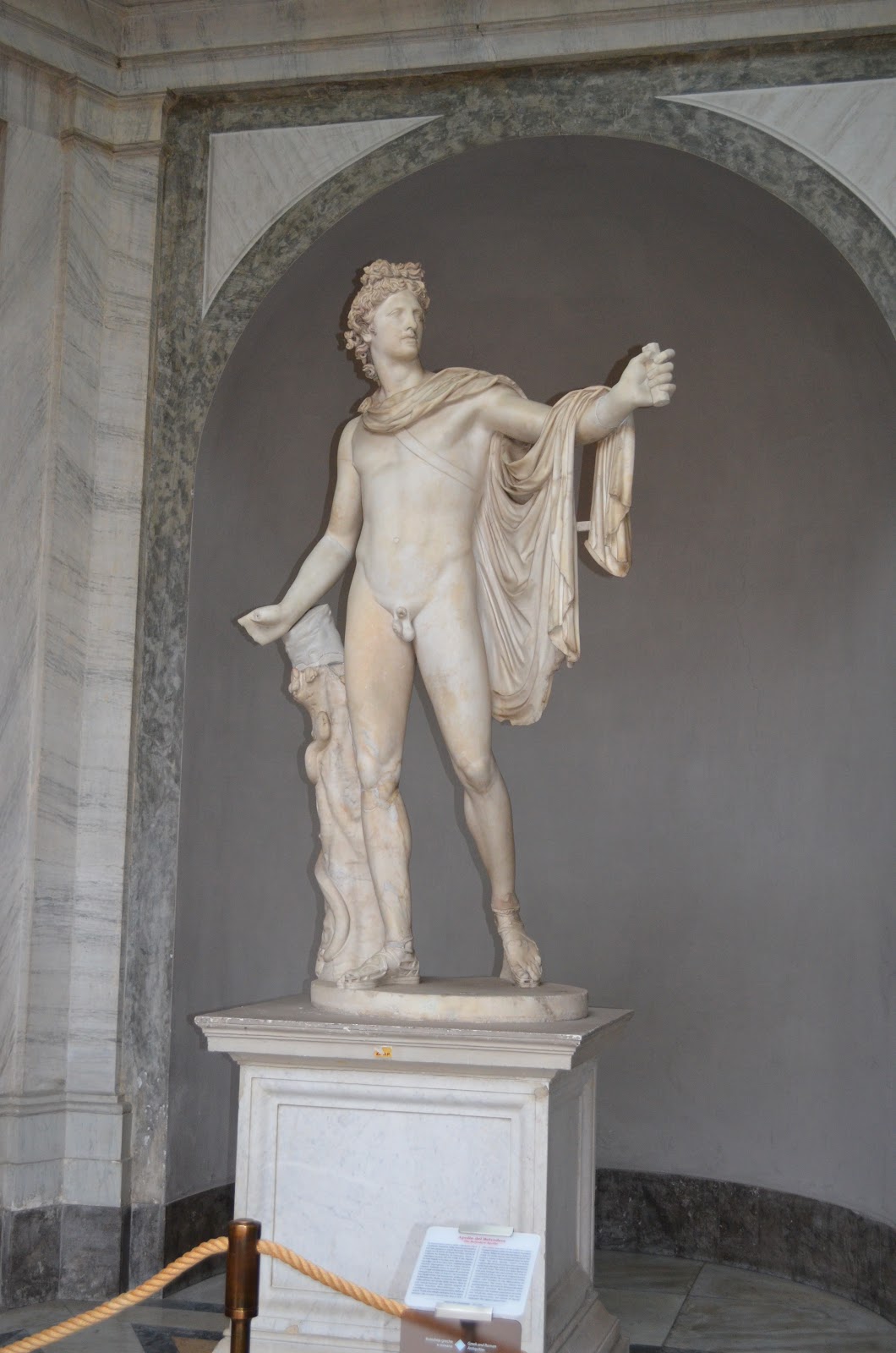 One of the statues in the Vatican Museum.  May I just say, just about every time I turned my head in Italy, I was greeted by marble male private parts!
﻿ 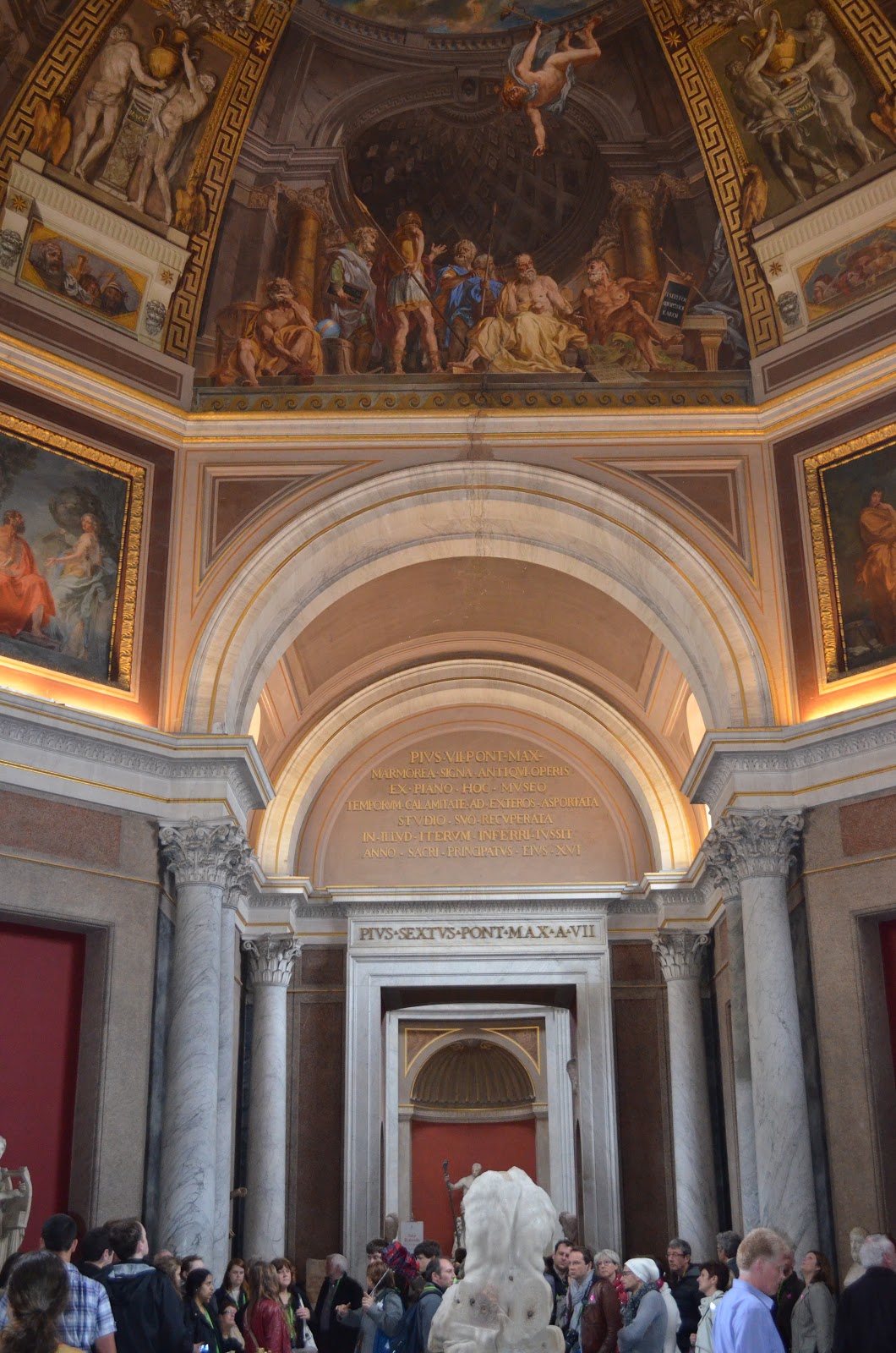 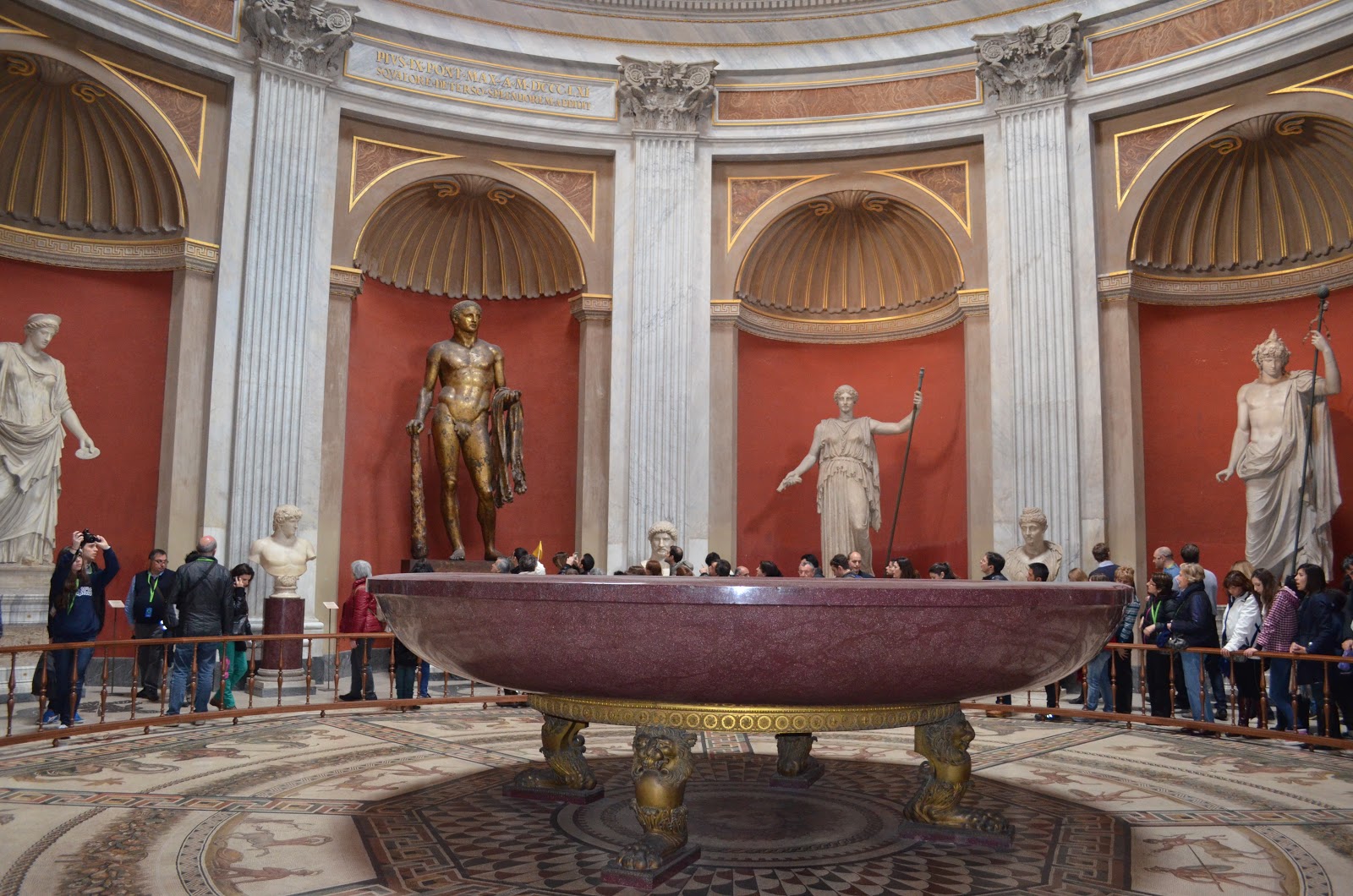 I had to include this picture.  The purpose of this room was simply to display the magnificent statues.  The large basin in the middle was originally an outdoor fountain, I believe.
﻿ 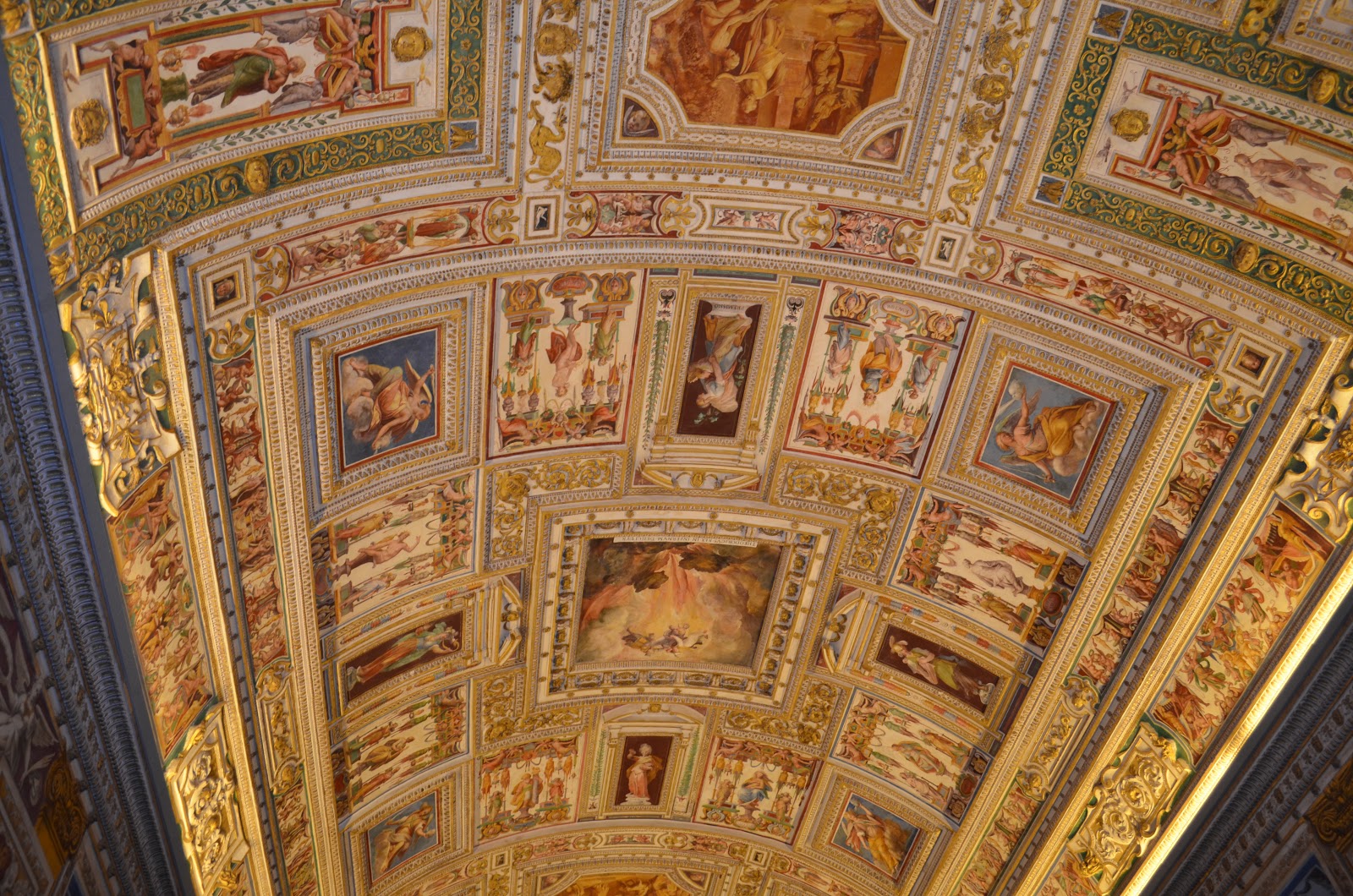 The ceiling on the gallery leading to the Sistine Chapel.  Totally amazing.
﻿ 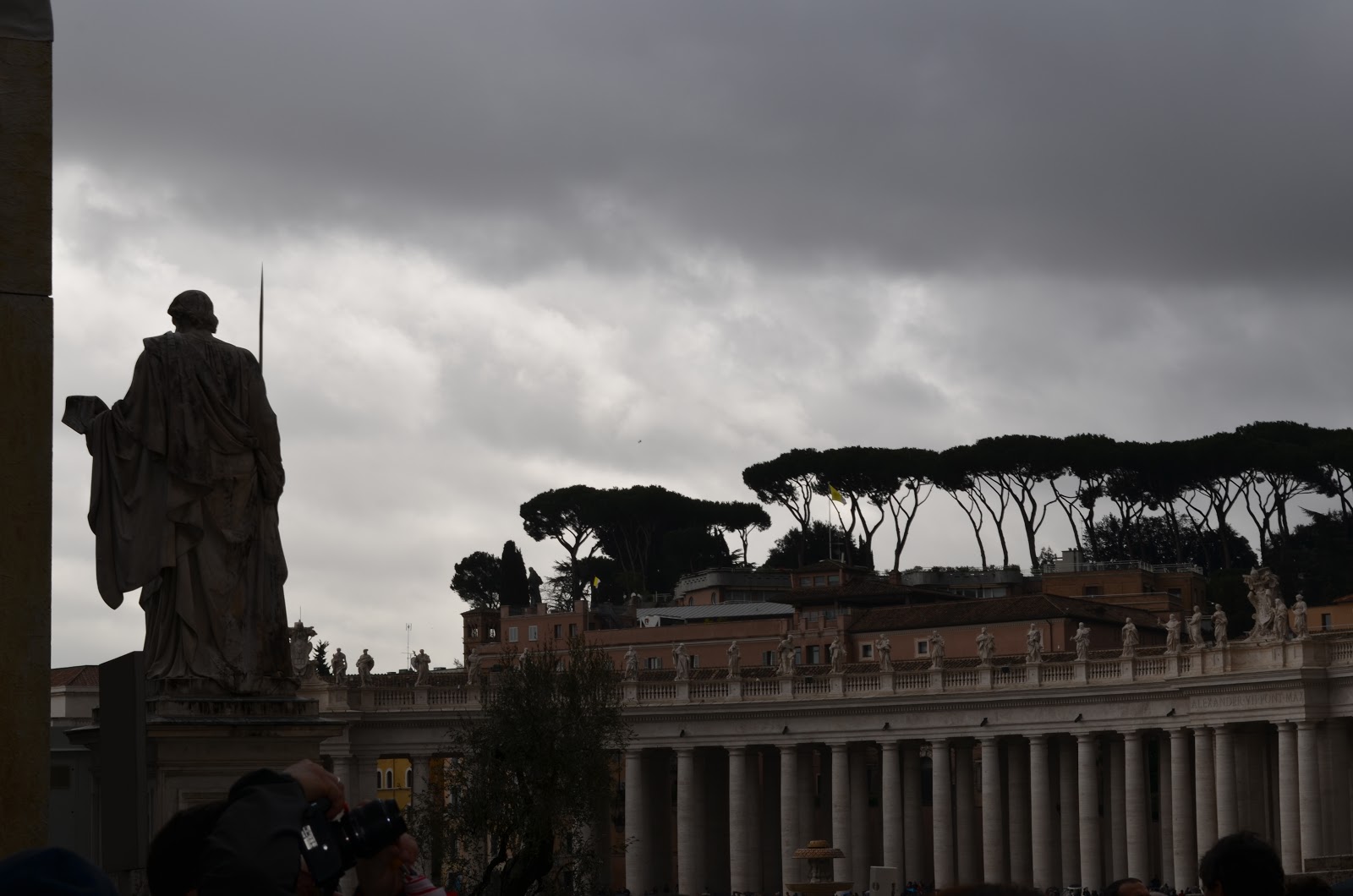 Our Vatican City tour started at the Vatican Museum, went around some of the grounds, and led to here, St. Peter's Square.  We were getting ready to visit St. Peter's Basilica, but it was shut down due to an unscheduled visit by the Cardinal from Milan (one of the contenders for Pope.)  We would have waited around, but it started raining and hailing on us.
Stay tuned for ITALY- 2 of 3-- Tuscany and Florence and ITALY- 3 of 3-- Venice!﻿