In the six months that I have been living in Oman, I have visited Dubai four times.  But this last weekend was my first time to visit Abu Dhabi.  They are about an 1 1/2 hours apart, but so very different!  While Dubai might be the more glitzy and glamorous of the two cities, Abu Dhabi is much larger, wealthier, and the capital of the United Arab Emirates.  When I drive through Dubai, I just get a sense of highways and tall buildings.  I found Abu Dhabi more beautiful and elegant. 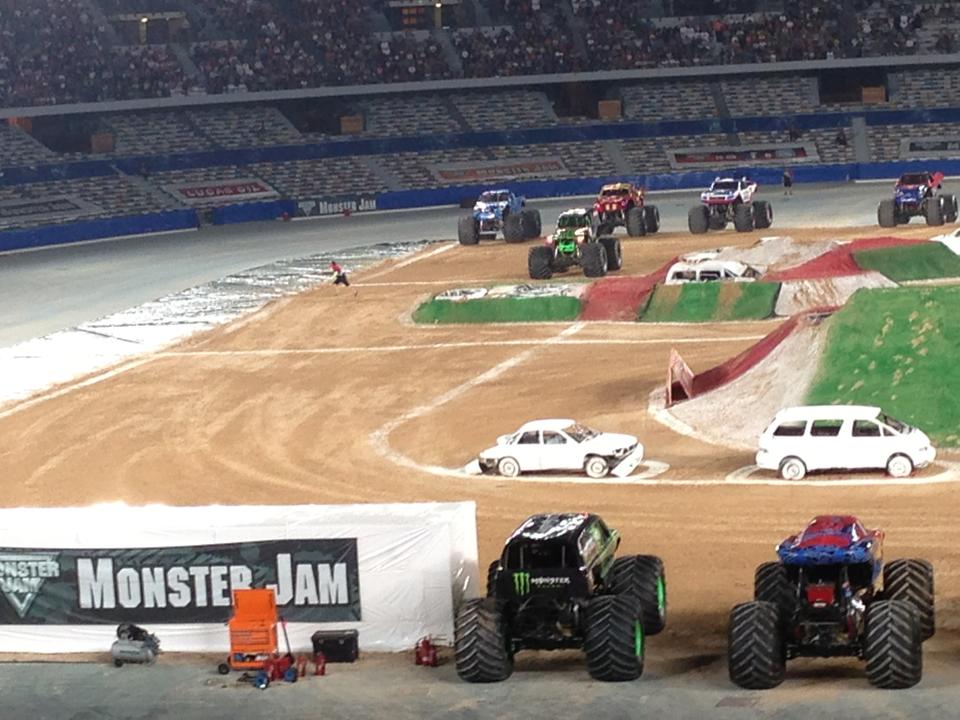 So, speaking of elegant, guess what finally brought us to Abu Dhabi?  That's right, Monster Jam!  This was the first monster truck event ever in the Middle East.  Now I am from Texas and there have been so many monster truck rallies in my time there, but we wait till we have to drive five hours to actually attend an event! 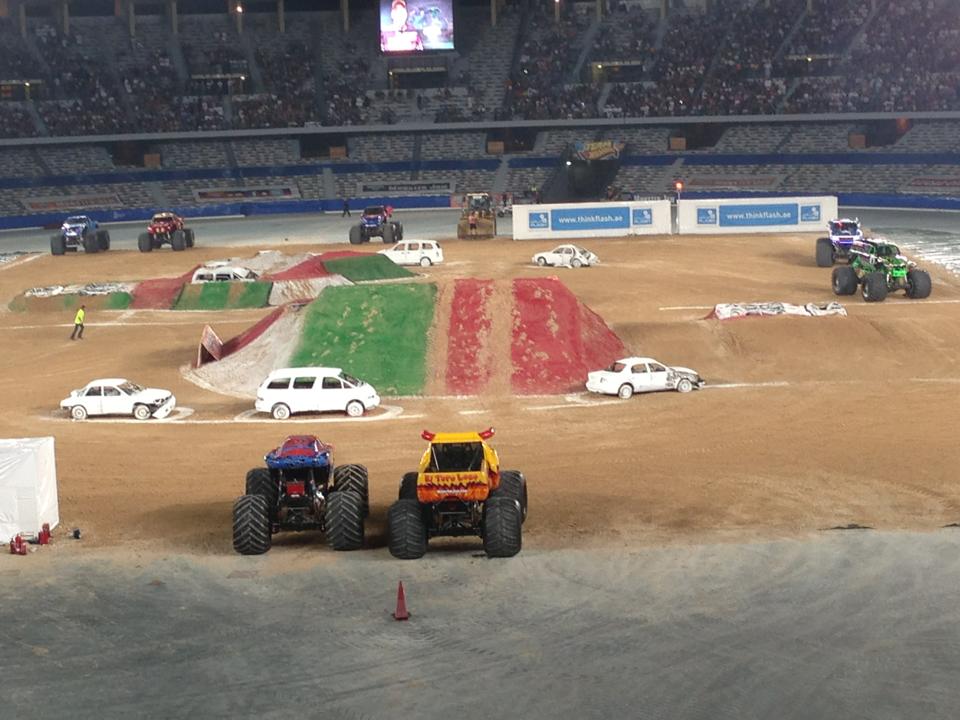 This was originally going to be a boys' weekend.  While I was making the hotel reservation, I noticed the hotel was attached to a beach and a mall.  I said wait a minute, I am going too! 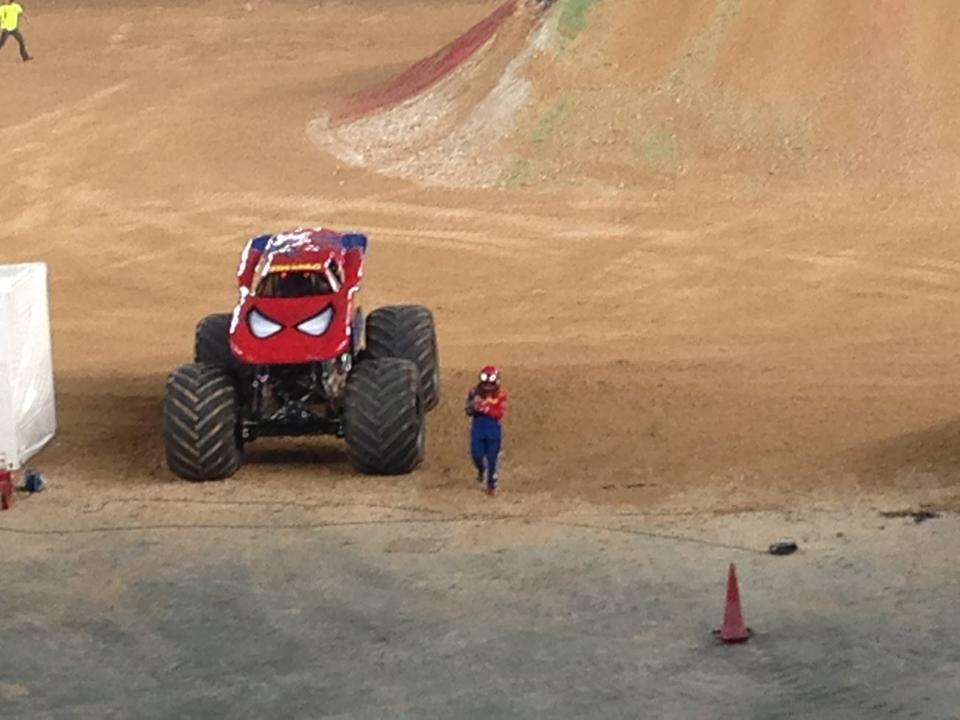 These pictures were taken by Austin.  He loved it!  Um, where was I?  At a mall.  People watching! 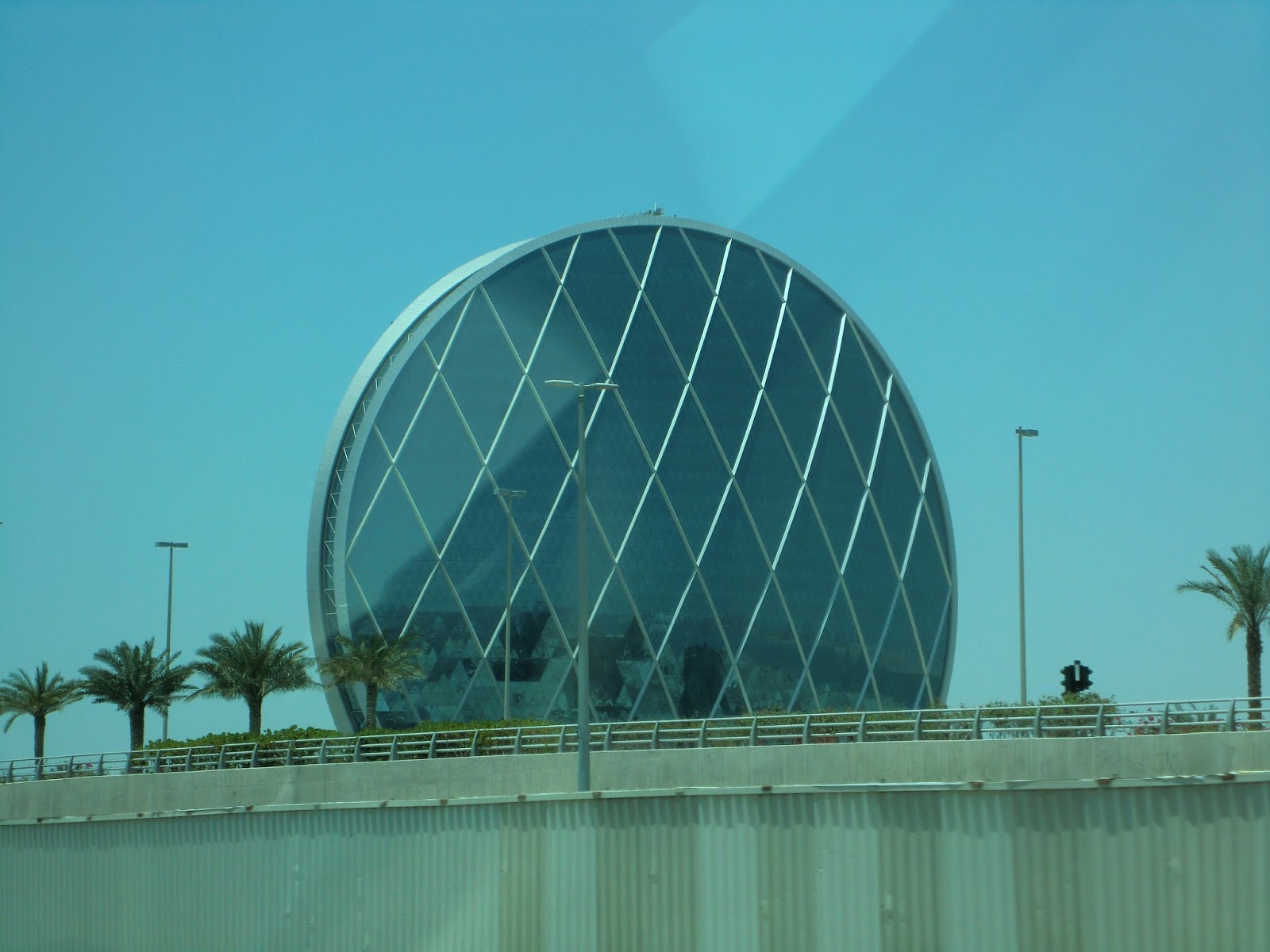 Let me go back to the beginning of our trip.  Here we are, driving in.  Here is the disk-shaped HQ building, which was voted 'Best Futuristic Design' in 2008. 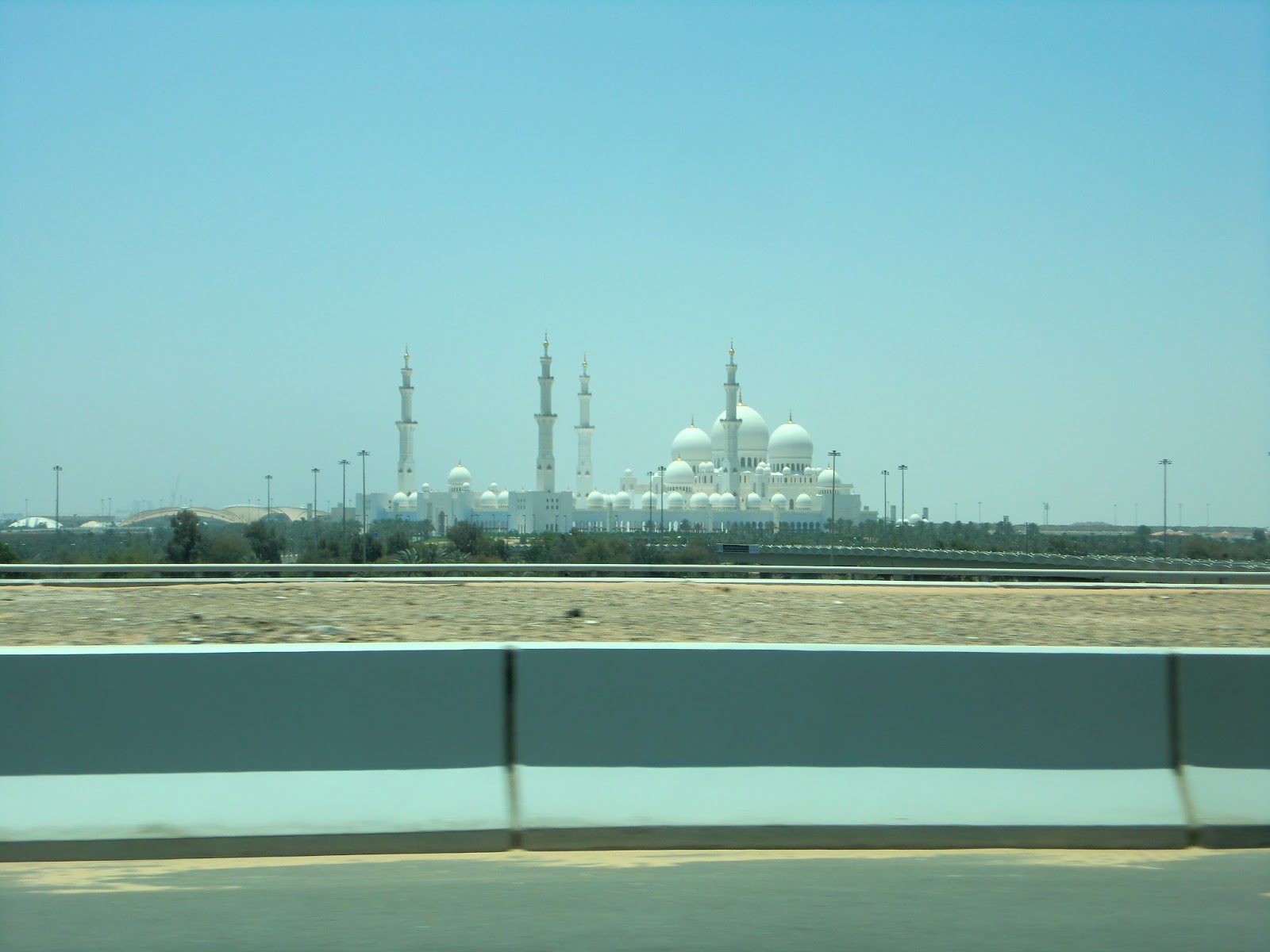 Shimmering almost like a mirage, is the Sheik Zayed bin Sultan al-Nahyan Mosque in the distance. 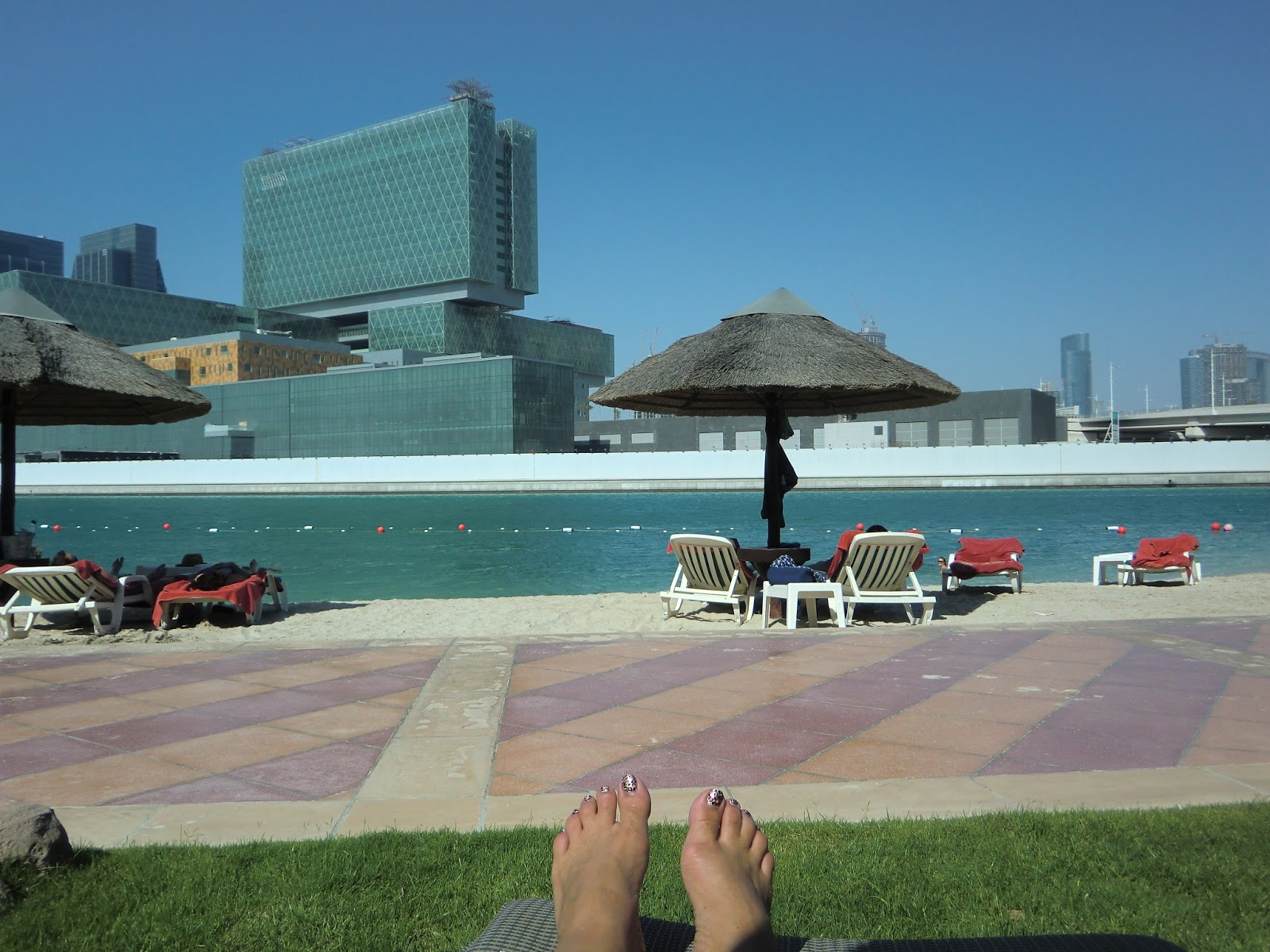 This is where I spent our first afternoon.  At the Beach Rotana Hotel.  So, technically it is a beach.  There is white sand and beautiful blue water.  But I have never been to a beach where I could see massive buildings so close.  But hey, it was still a beautiful and relaxing setting. 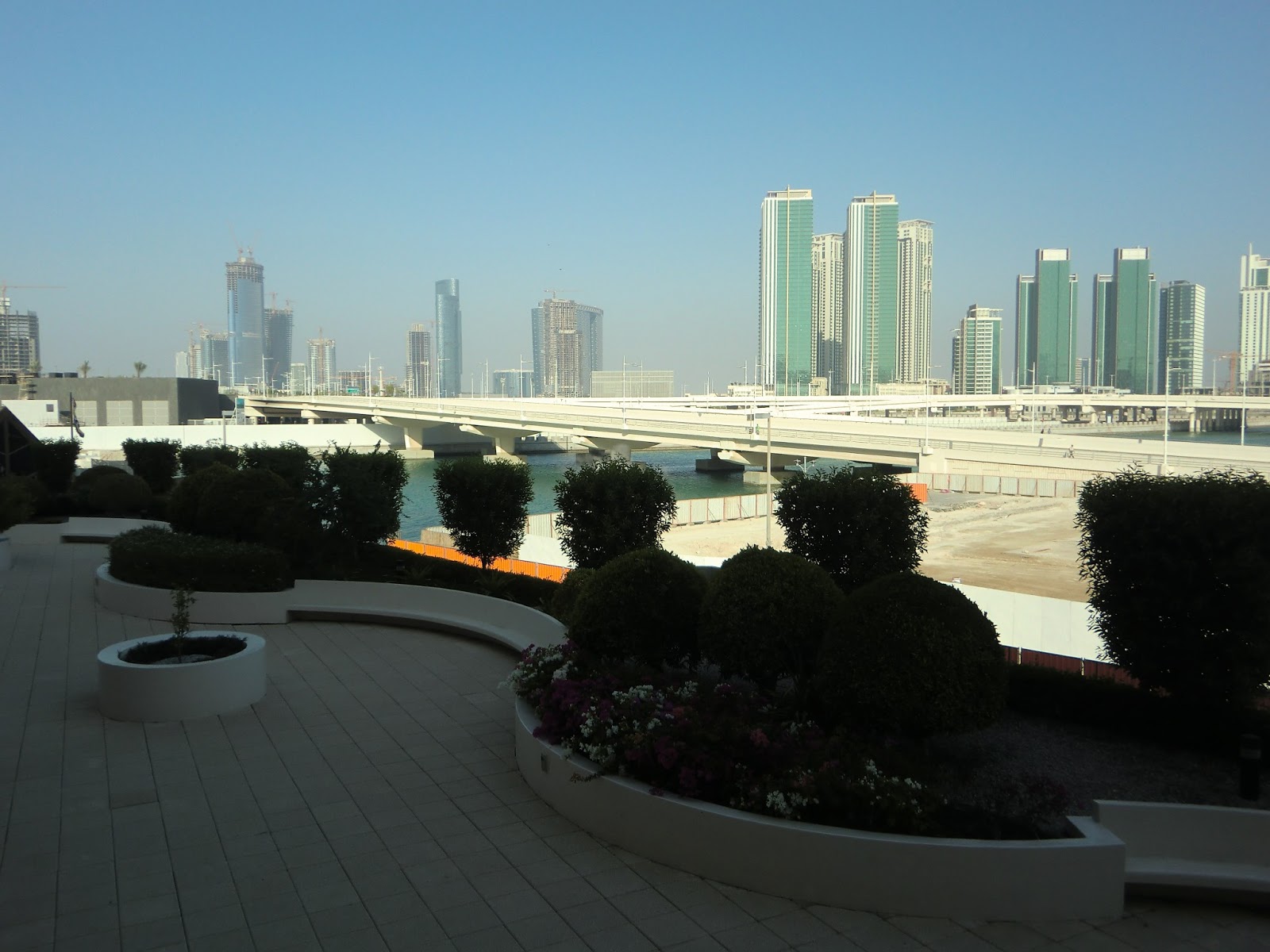 The view of Abu Dhabi from the hotel room balcony.﻿ 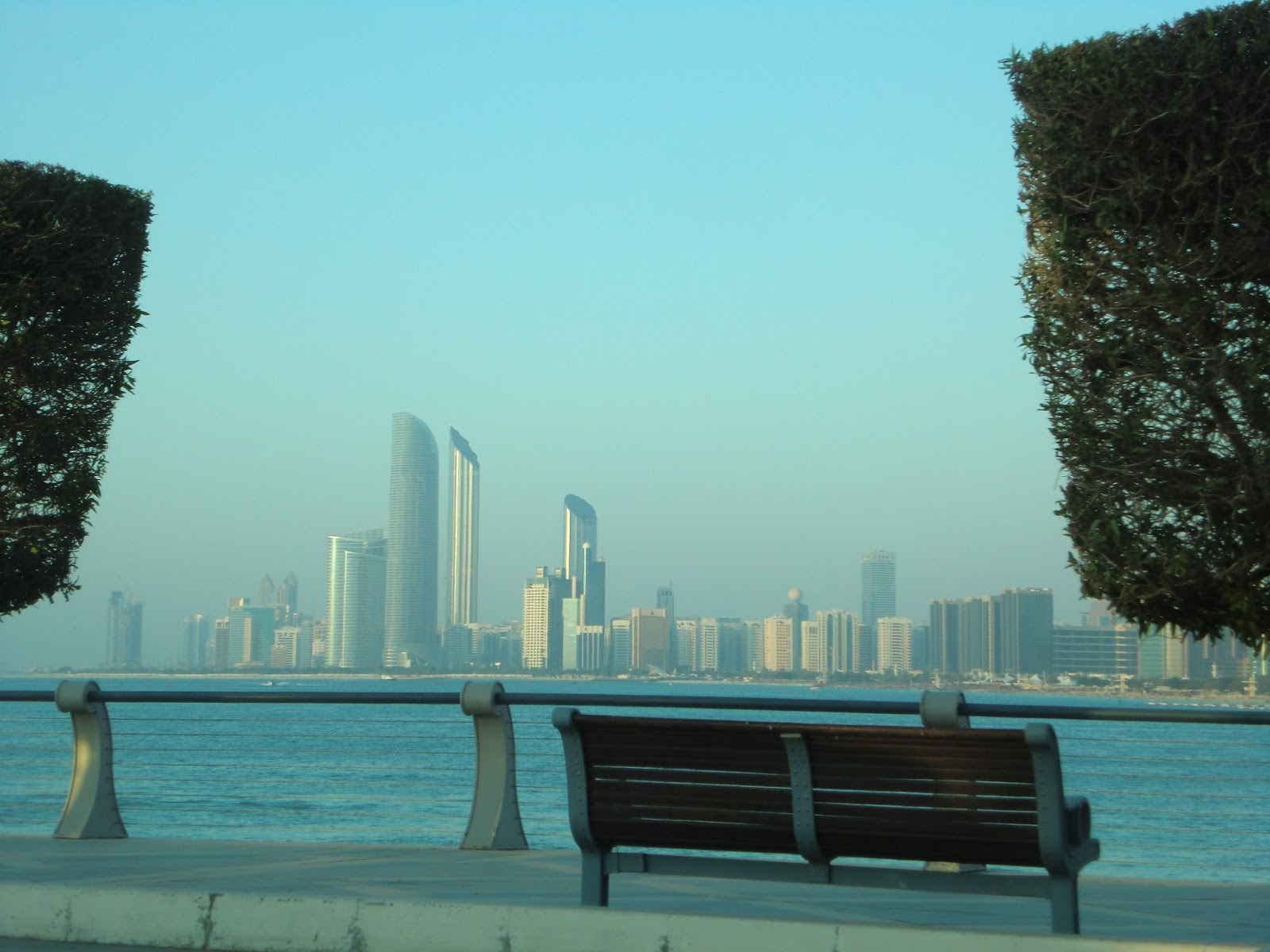 That evening, as the boys headed to Monster Jam, I took a taxi to the Marina Mall.  It was a gorgeous drive along the corniche, along the water.  Now this picture was taken on the bridge to the mall.  As the name indicates, the mall was next to a beautiful marina, with the skyline of the city in the distance.  My pictures did not do it justice.  So back to the people watching.  If you go to the mall in Muscat, you will mainly see Omanis, and just a few Westerners.  At the main malls in Dubai, it's mainly Westerners, with fewer locals.  I found more of a mixture of people at the Marina Mall. 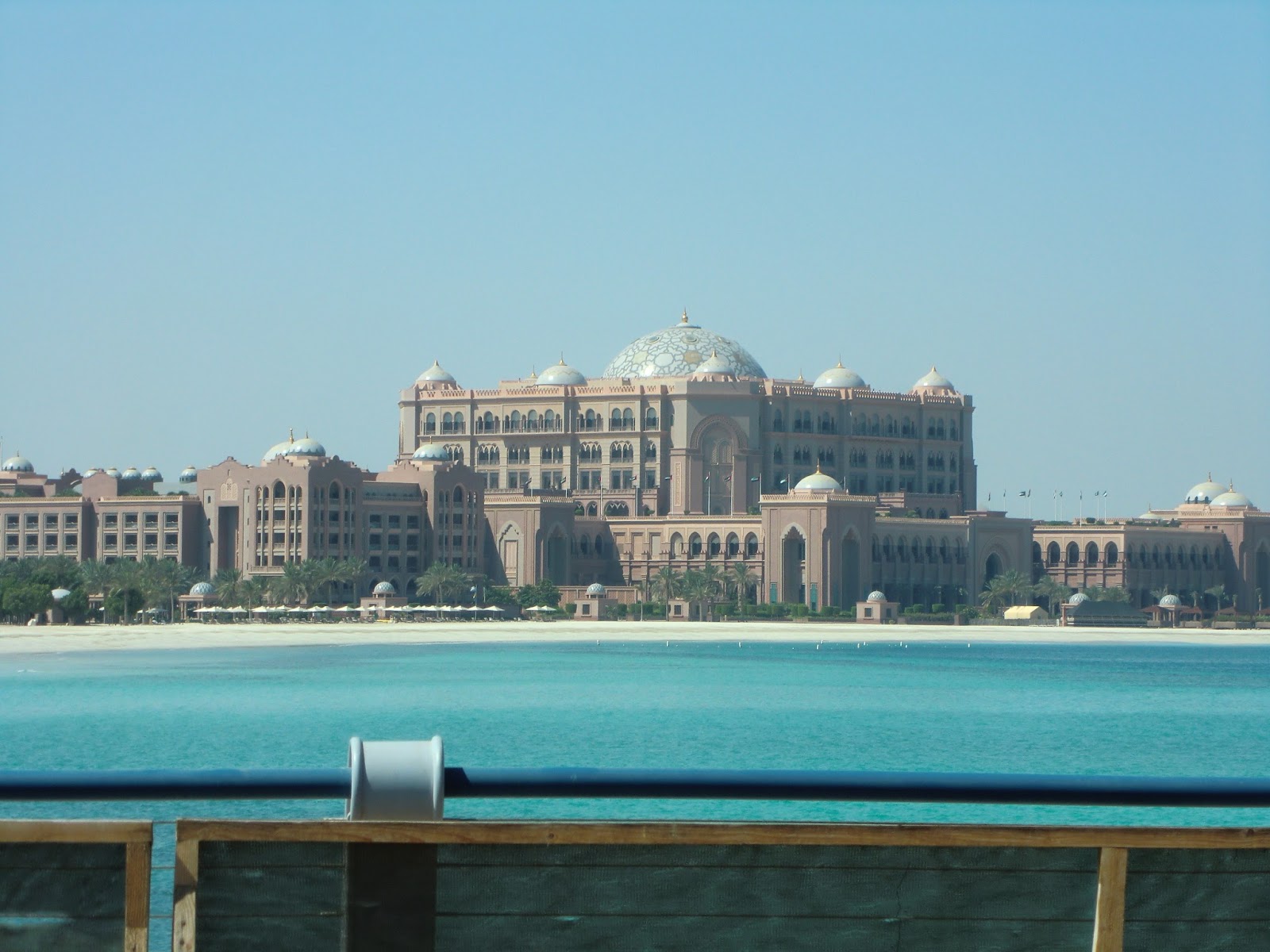 There were two places I wanted to see the next day.  First stop was the Emirates Palace Hotel, which we see in the distance.  ﻿ 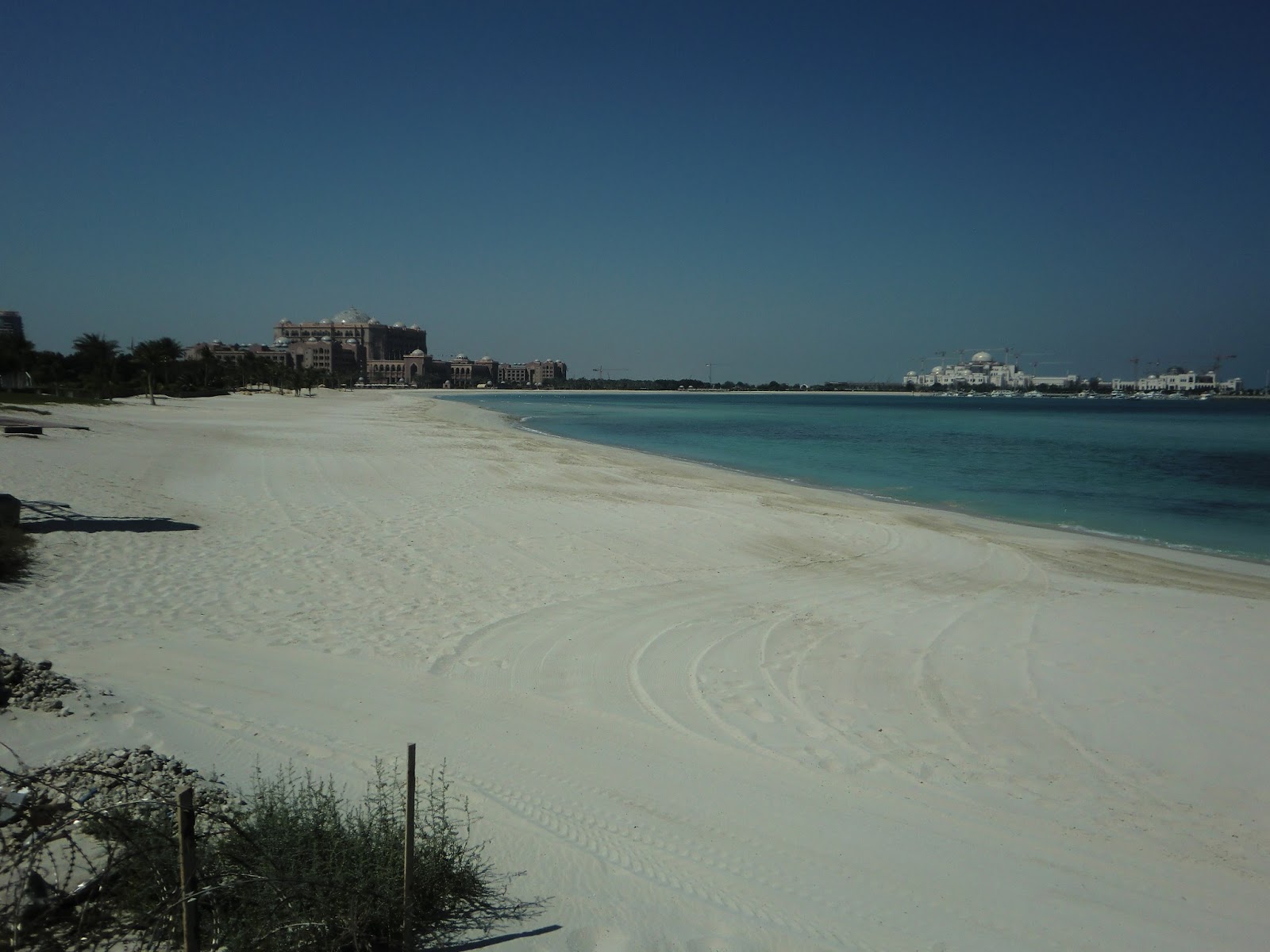 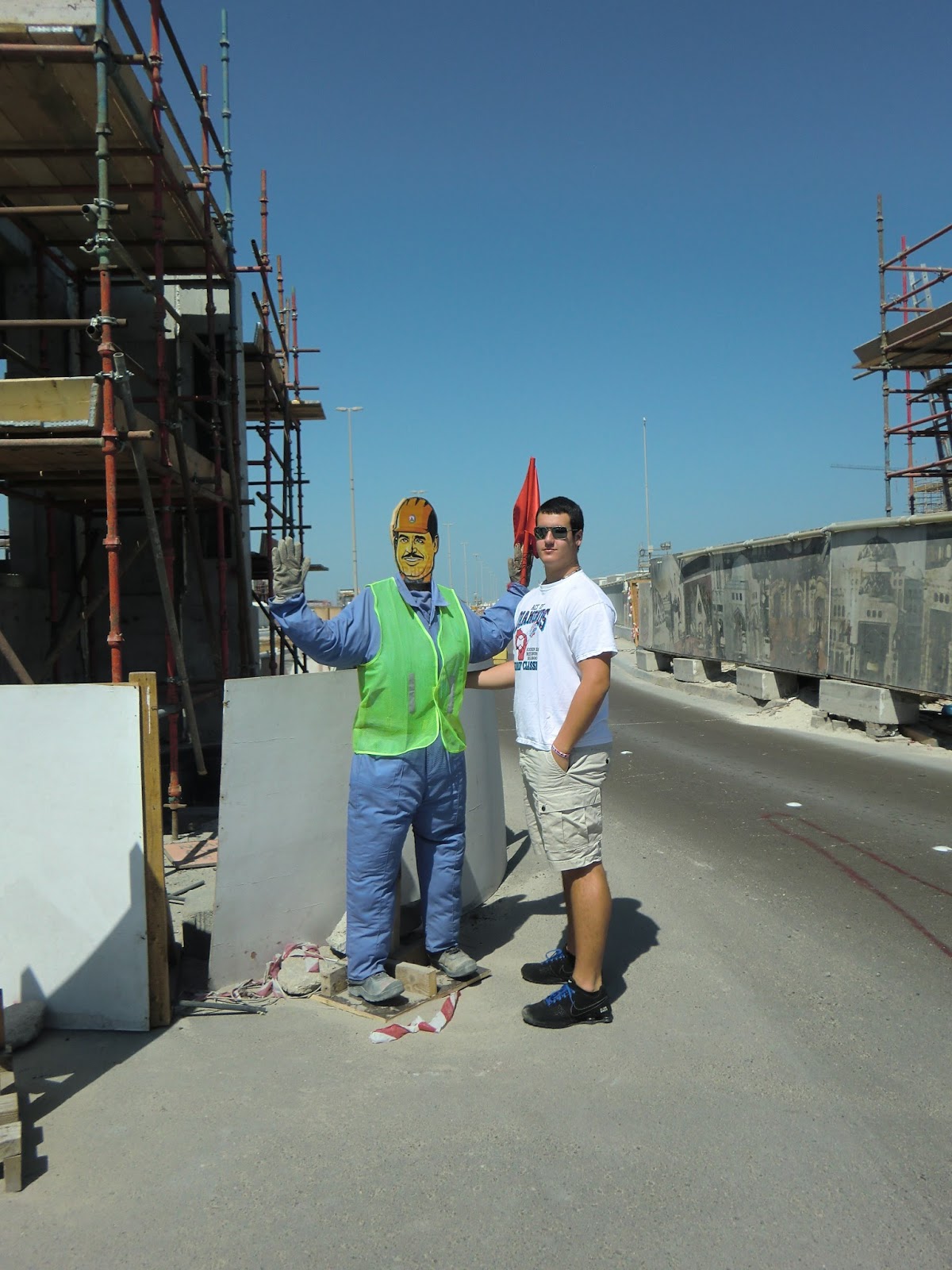 We have noticed this in Oman-- mannequins dressed as construction workers holding a caution flag.  This was not a mannequin per se, but it was very well done.  Of course as soon as Austin got back in the car, we saw the 'No Photography' sign.  Oops!
﻿ 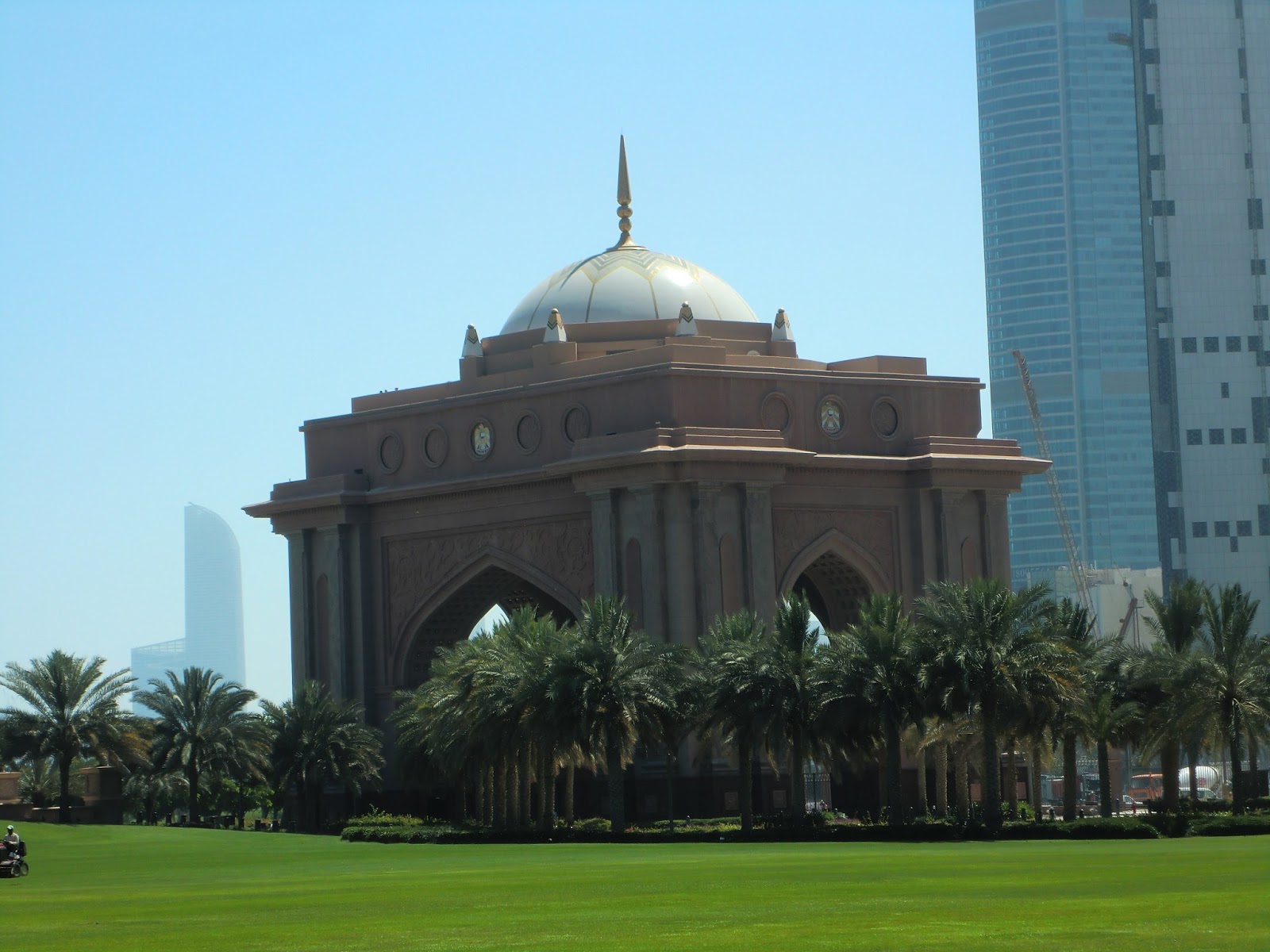 This is just the entrance to the Emirates Palace. 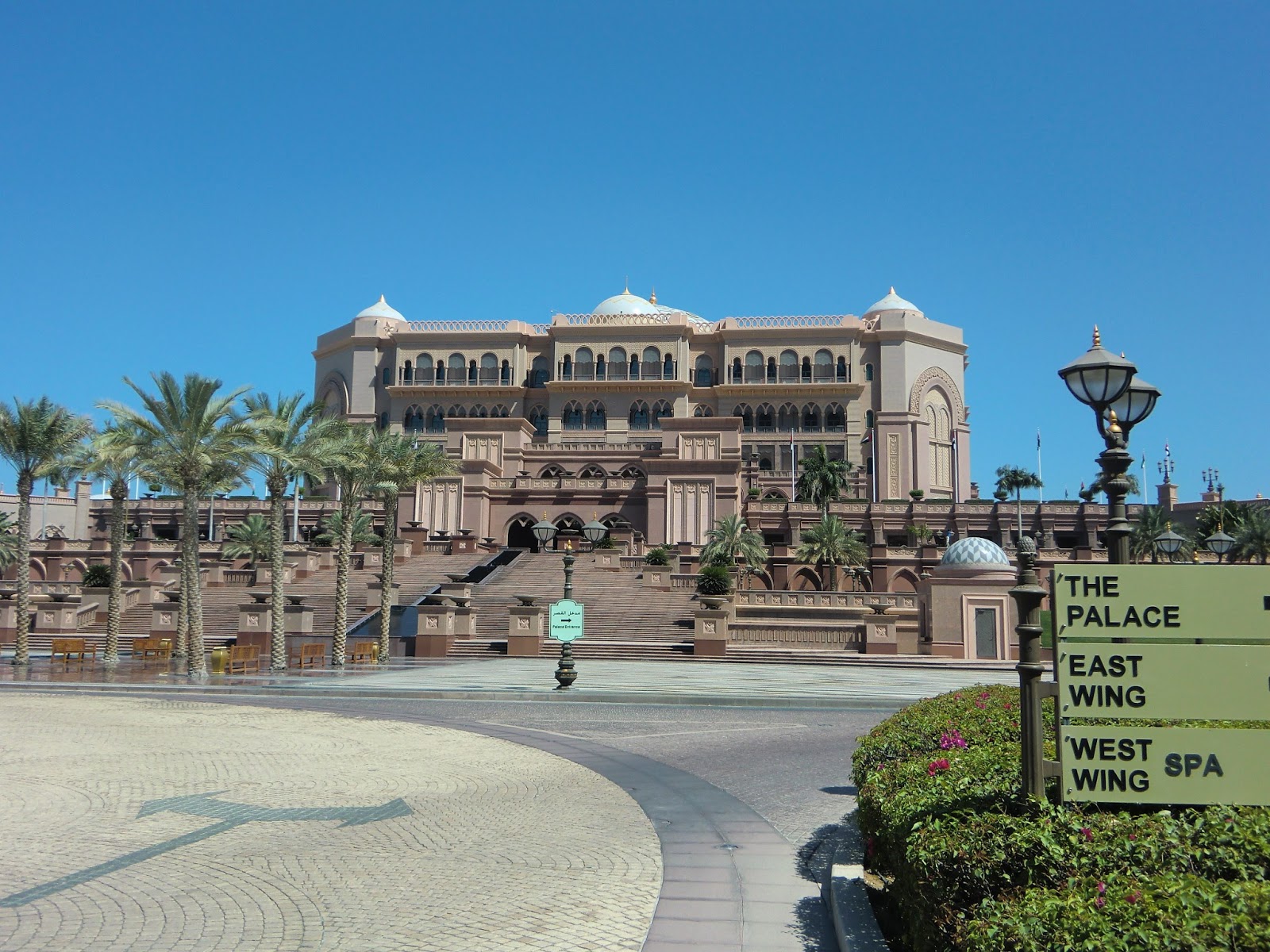 My husband has done lots of traveling in the US and around the world, and has stayed in some very nice hotels.  He said he has never seen a hotel like this!  I really wanted to see the inside, but Austin was wearing 'short pants' and they frown on that.  So he and Joe stayed in the car while I took a peek inside.  But I got so distracted and was in a hurry that I didn't get good pictures.  Reason enough to return to Abu Dhabi! 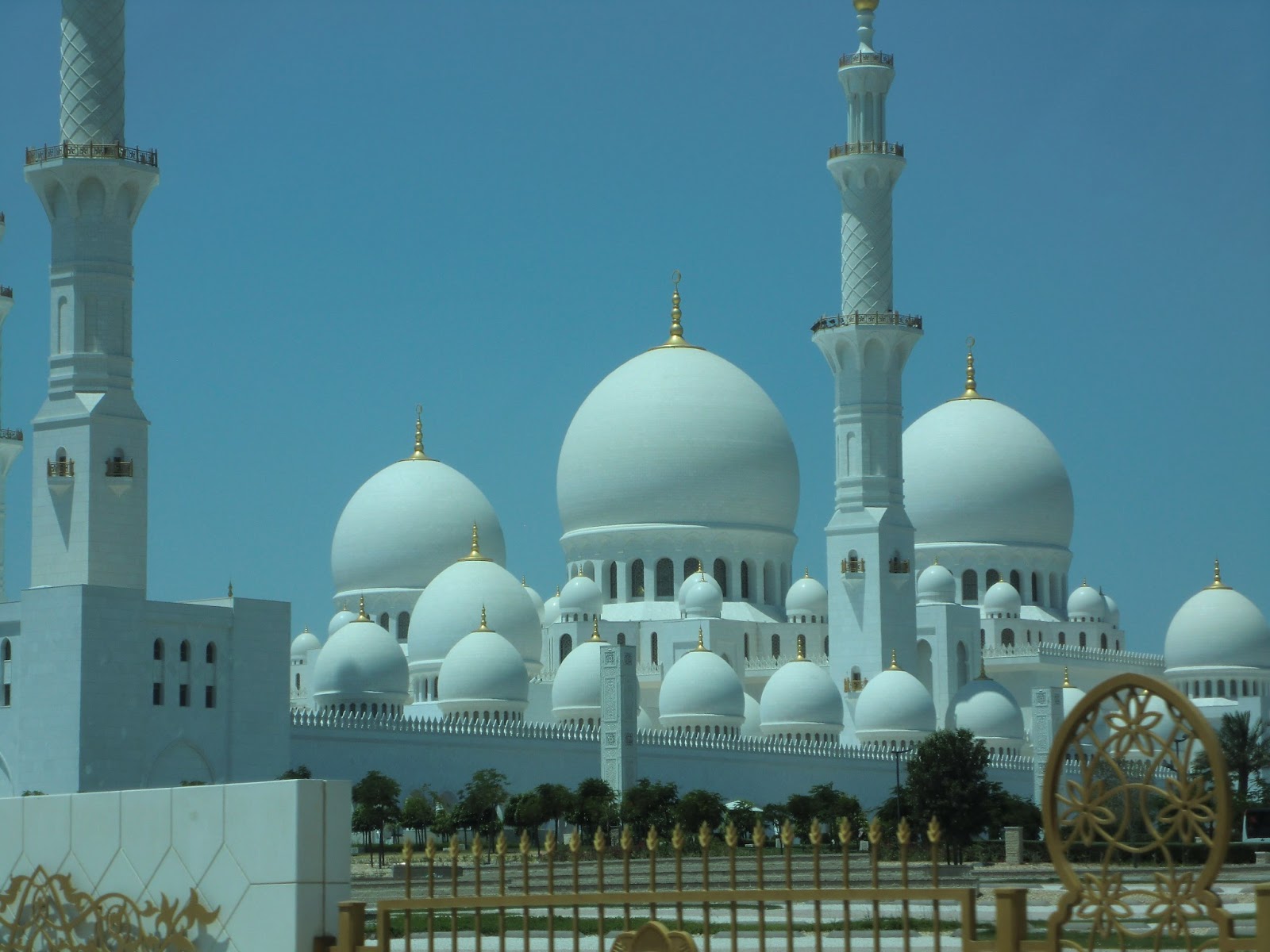 My next must-see was the mosque, also known as the Grand Mosque.  Here you can see some of its 80 domes. 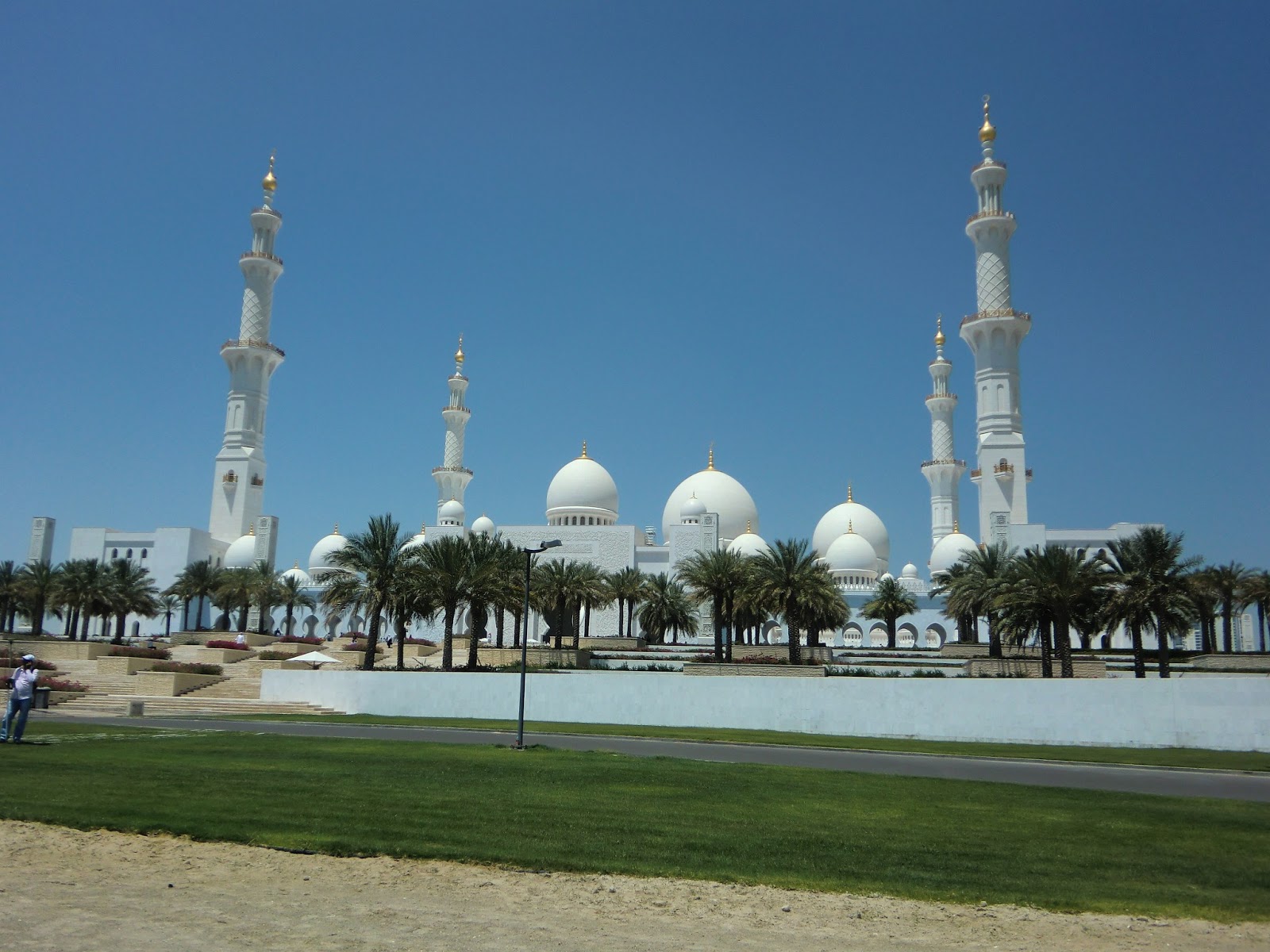 This mosque was recently completed and is the burial site for Sheik Zayed. 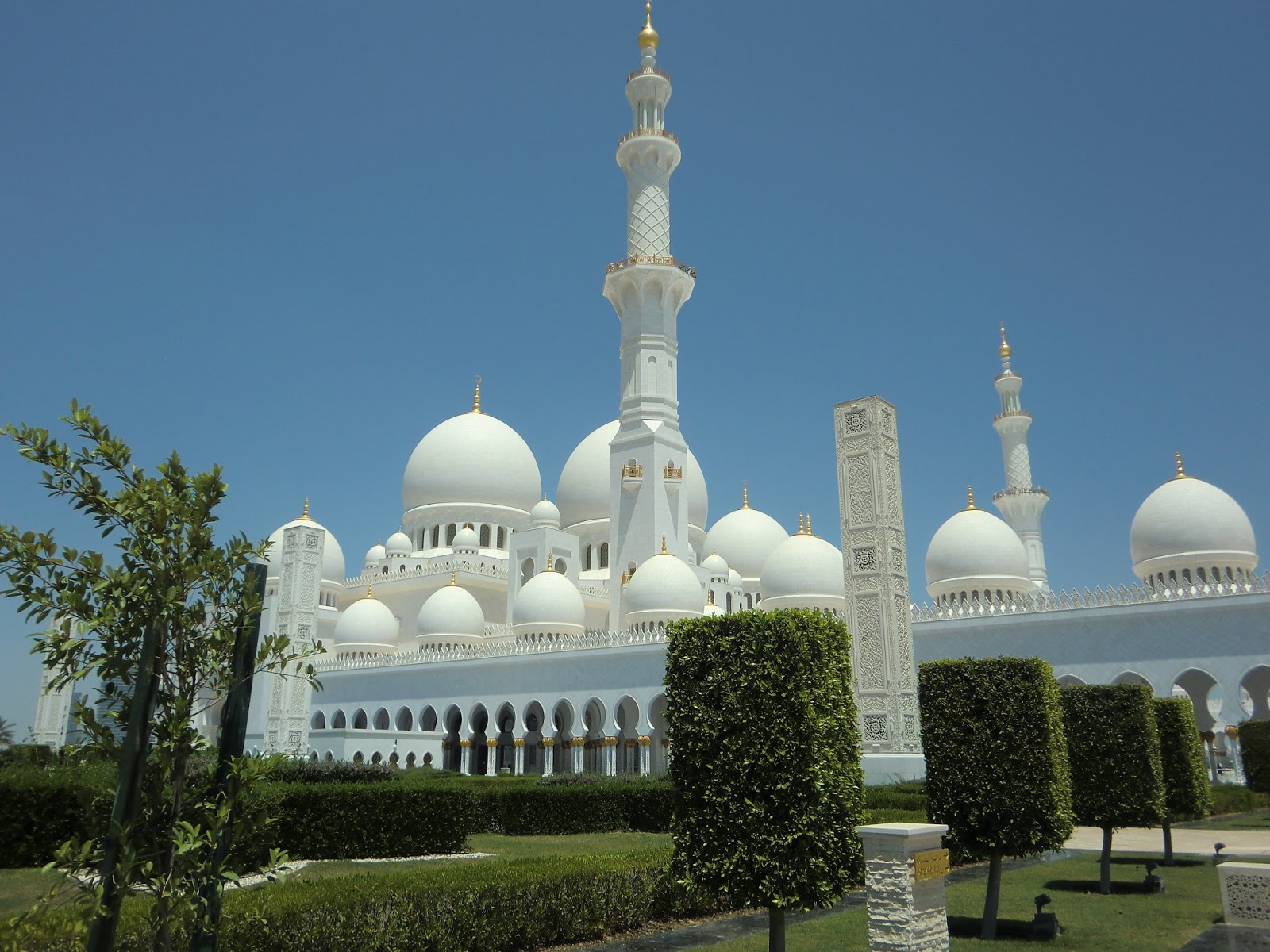 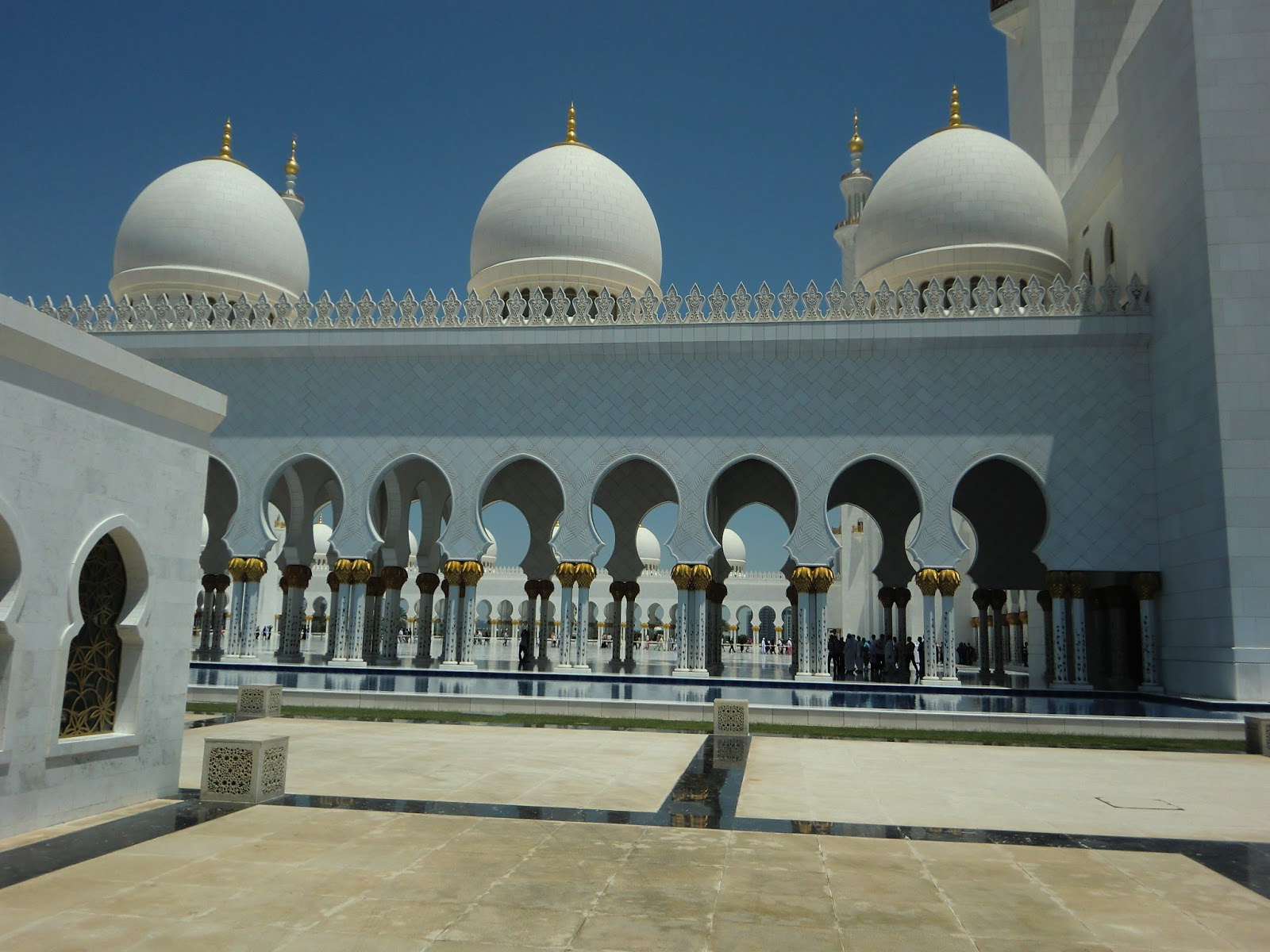 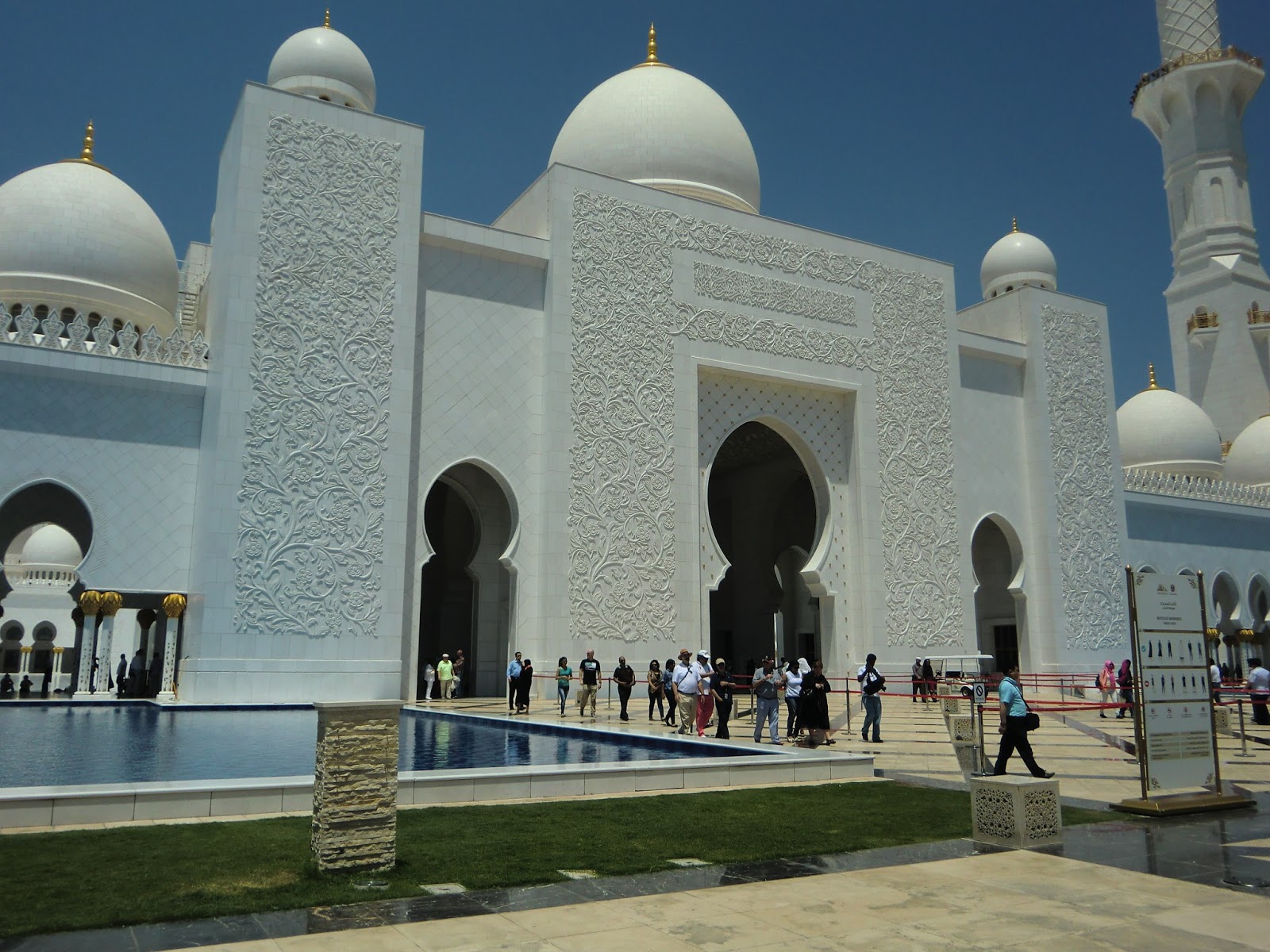 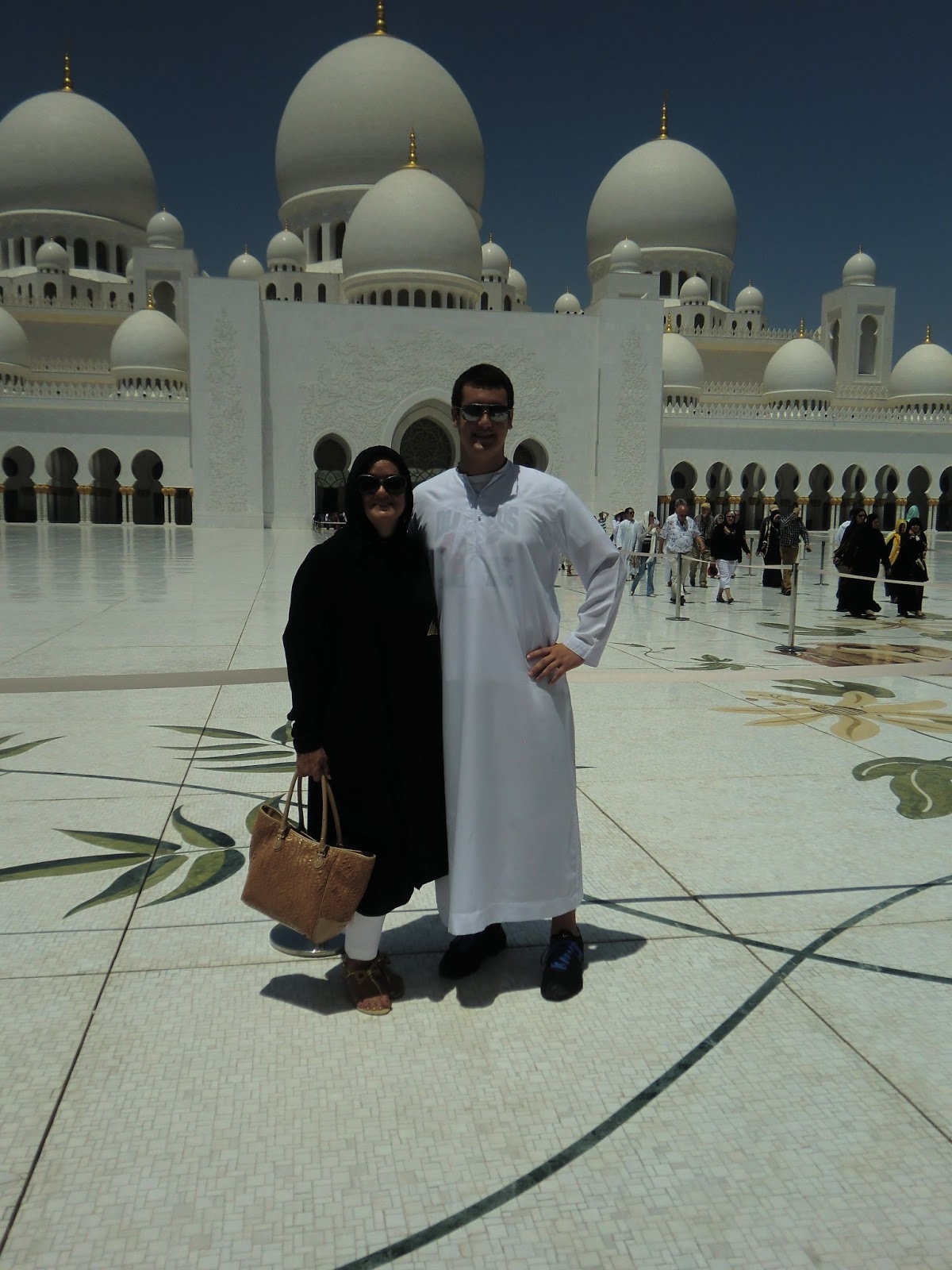 I was under the impression that all women had to wear an abaya (black robe) and sheyla (headscarf).  I could have just worn my own scarf as long as my pants and shirt sleeves were long enough.  Oh well, makes for an interesting picture.  :)  Austin is wearing a dishdasha (which the mosque provided) because he was wearing shorts.  By the way, if you are a man and want to visit the Middle East, shorts are generally not a good idea.  One more thing.  We had to remove our shoes before entering the prayer hall.  The temperature was in the upper 90's and let me tell you, the marble floors outside the entrance were HOT! 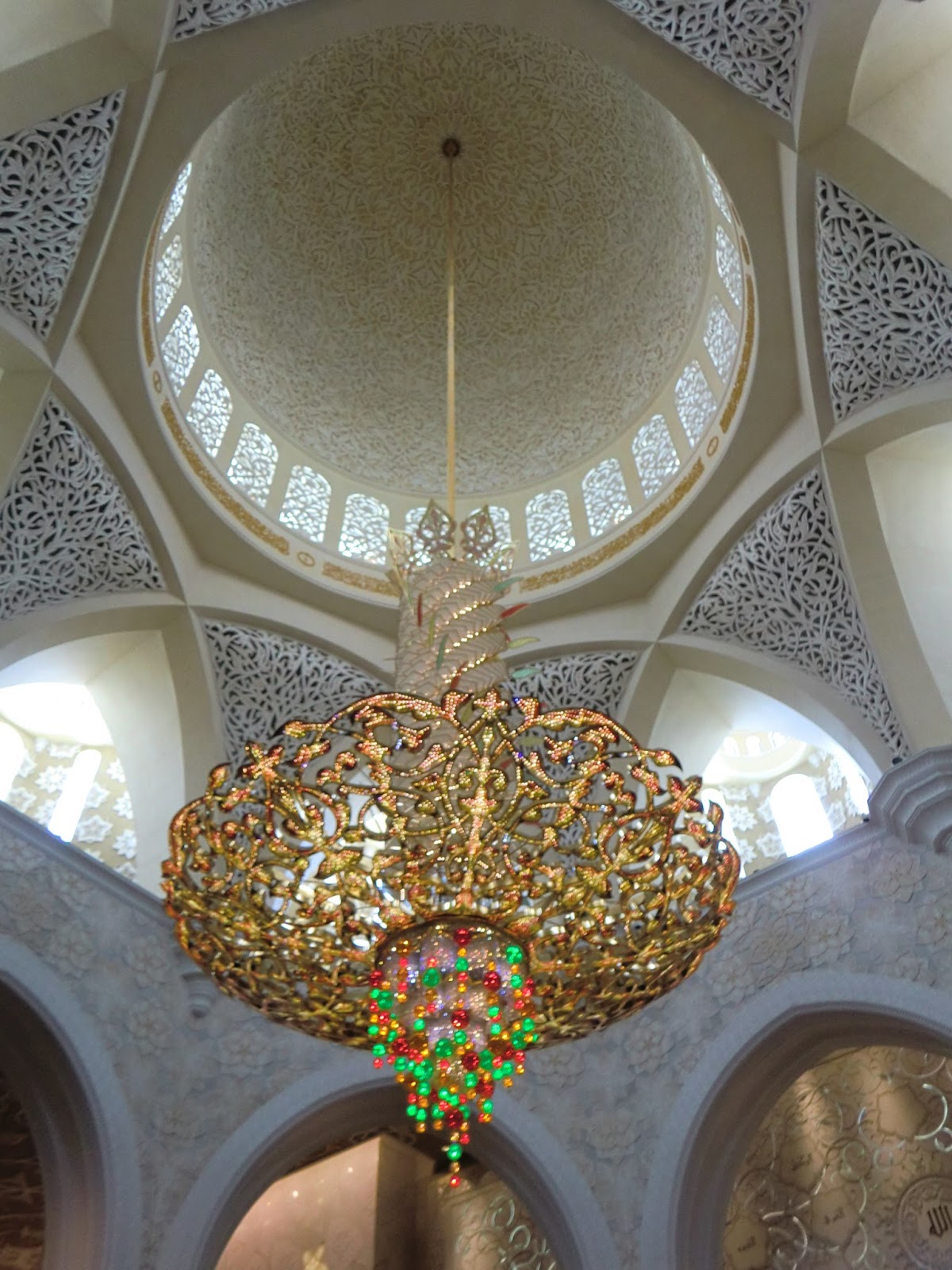 The 24-karat gold-plated chandelier in the main prayer hall.  Okay, I don't mean to sound like the Omani resident that I am, but I found the interior of the Muscat Grand Mosque to be much more beautiful.  (But the exterior of this mosque is more stunning.) 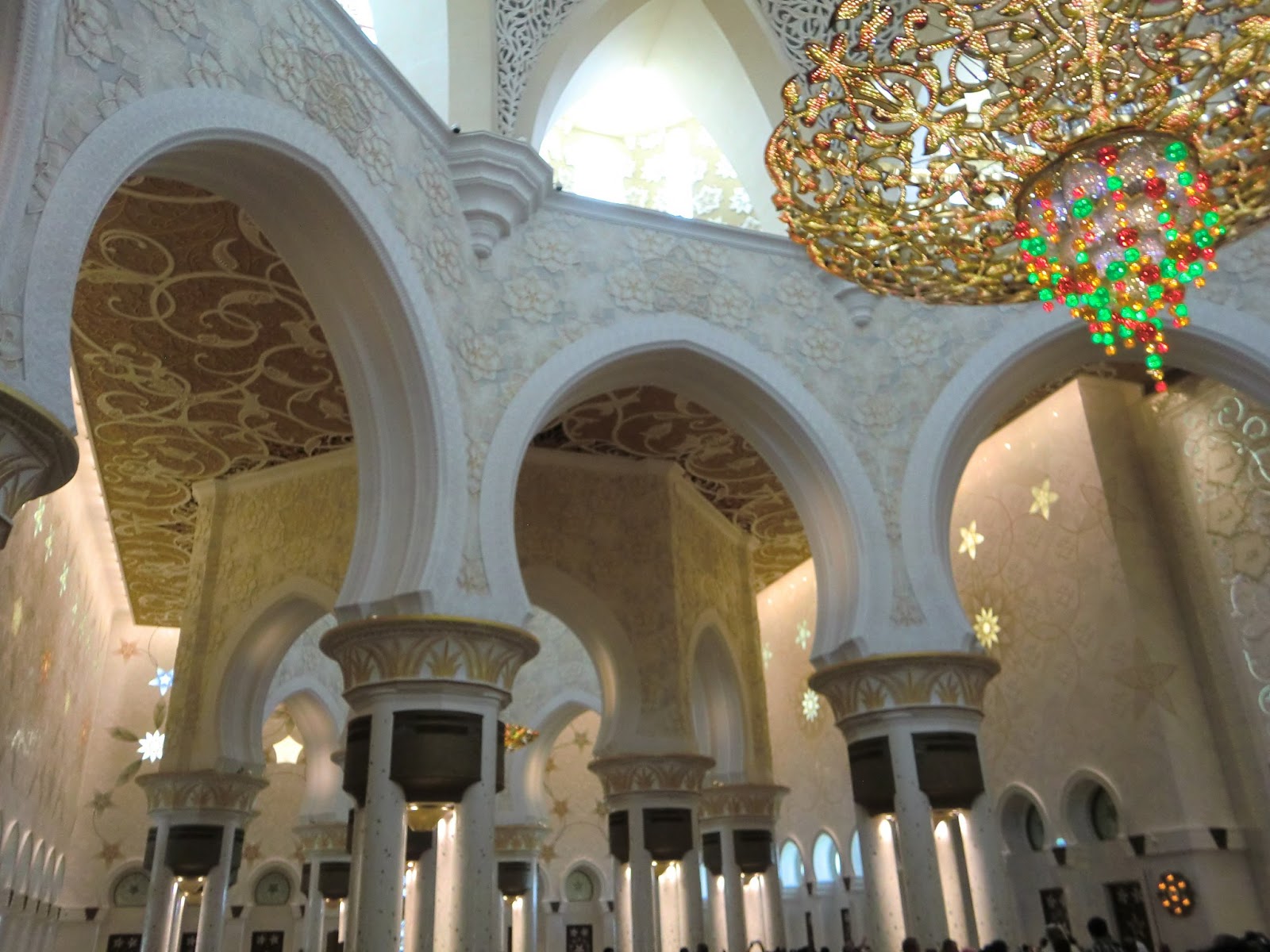 This main hall can hold 7000 worshippers.  It is the 8th largest mosque in the world, according to Wikipedia. 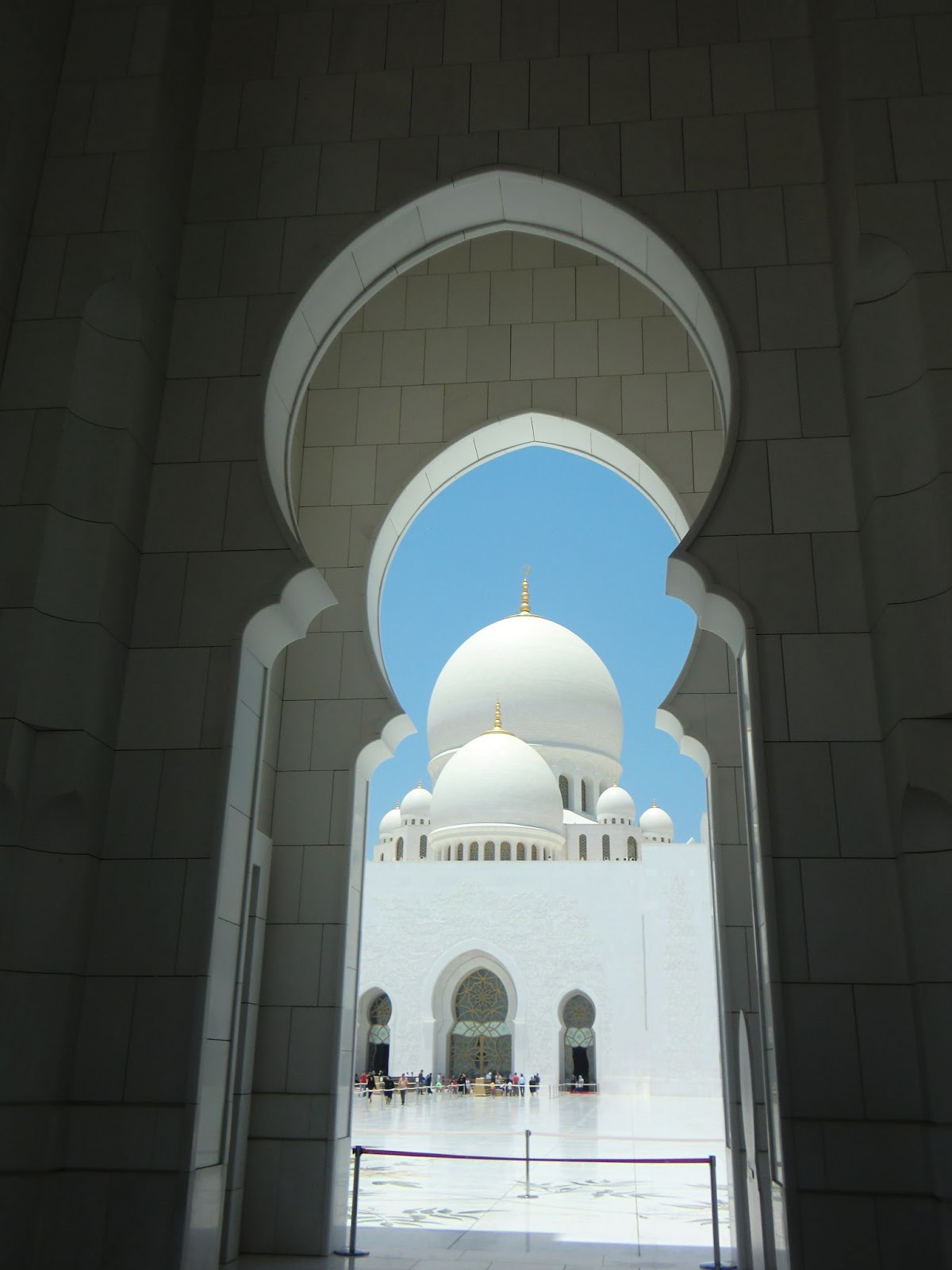 This was a whirlwind visit to Abu Dhabi.  I loved what little I saw!﻿