Buckingham Palace and Changing of the Guard 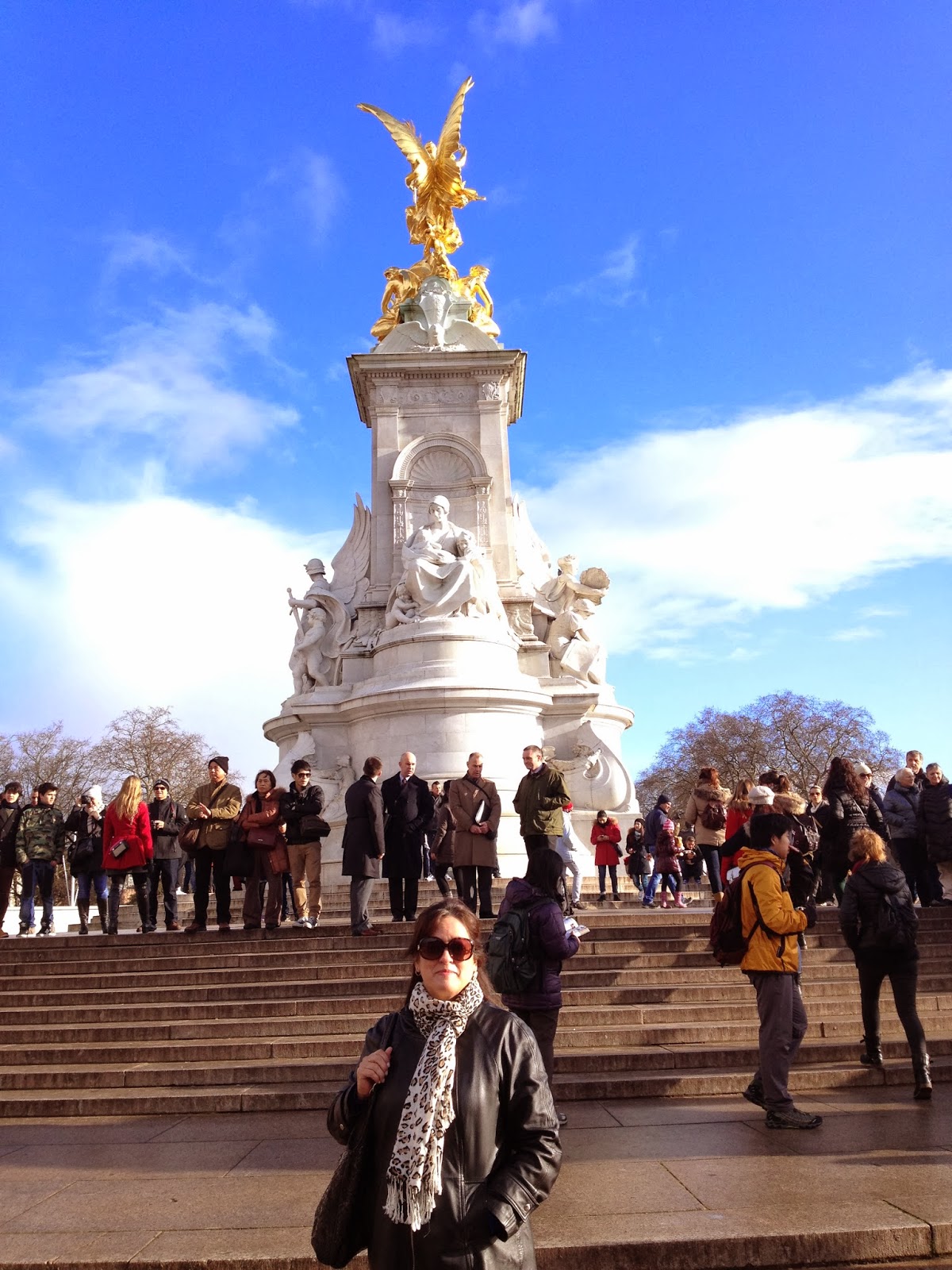 How to spend our last full day in London?  Buckingham Palace!  We tried to go before, but at this time of year, the changing of the guard only happens every other day, and not in rainy weather.  So this was the right day!  Here I am, in front of the Victoria Memorial.  This was one of the few times I needed my sunglasses.  :) 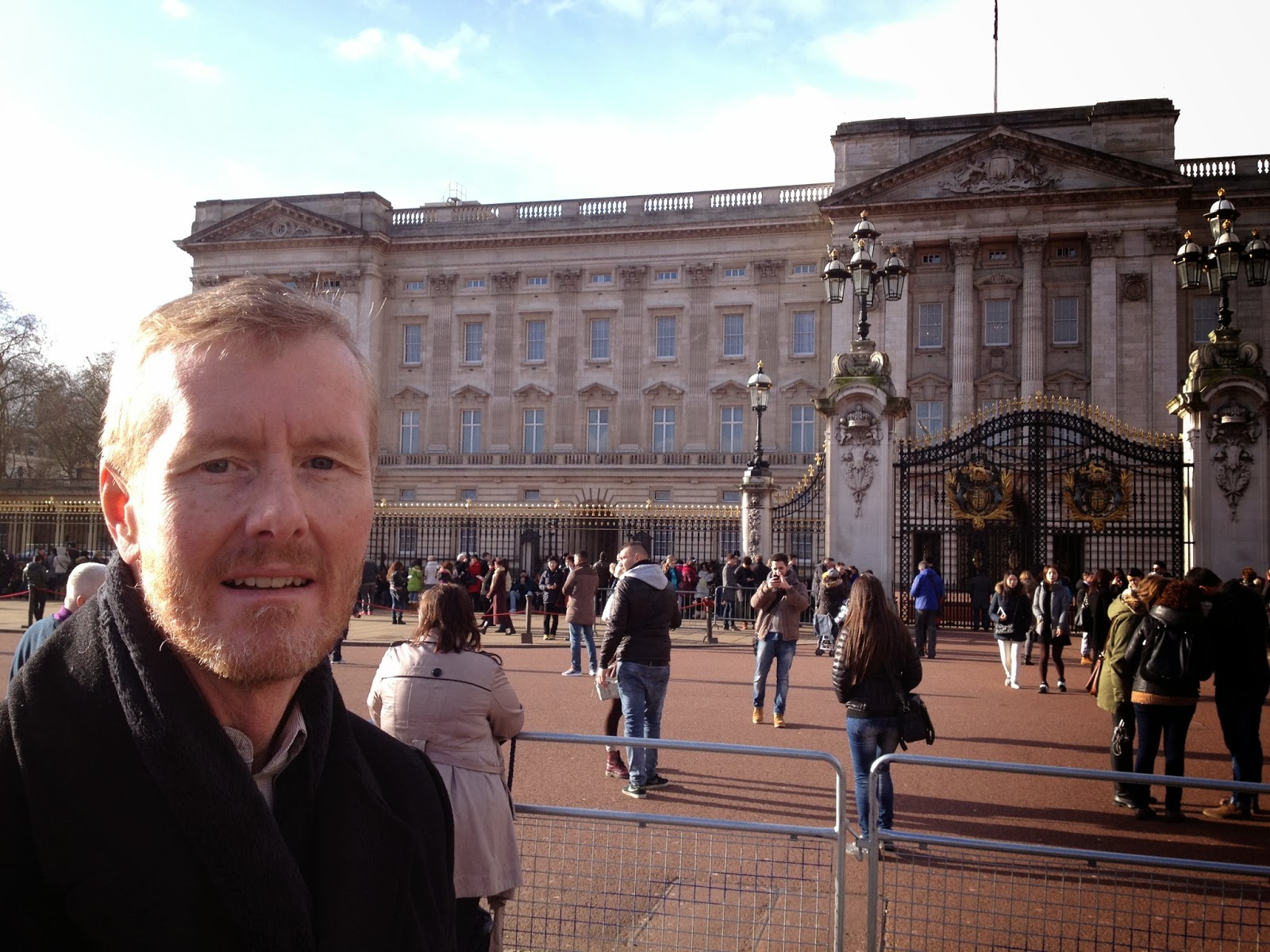 In the other direction, Buckingham Palace! 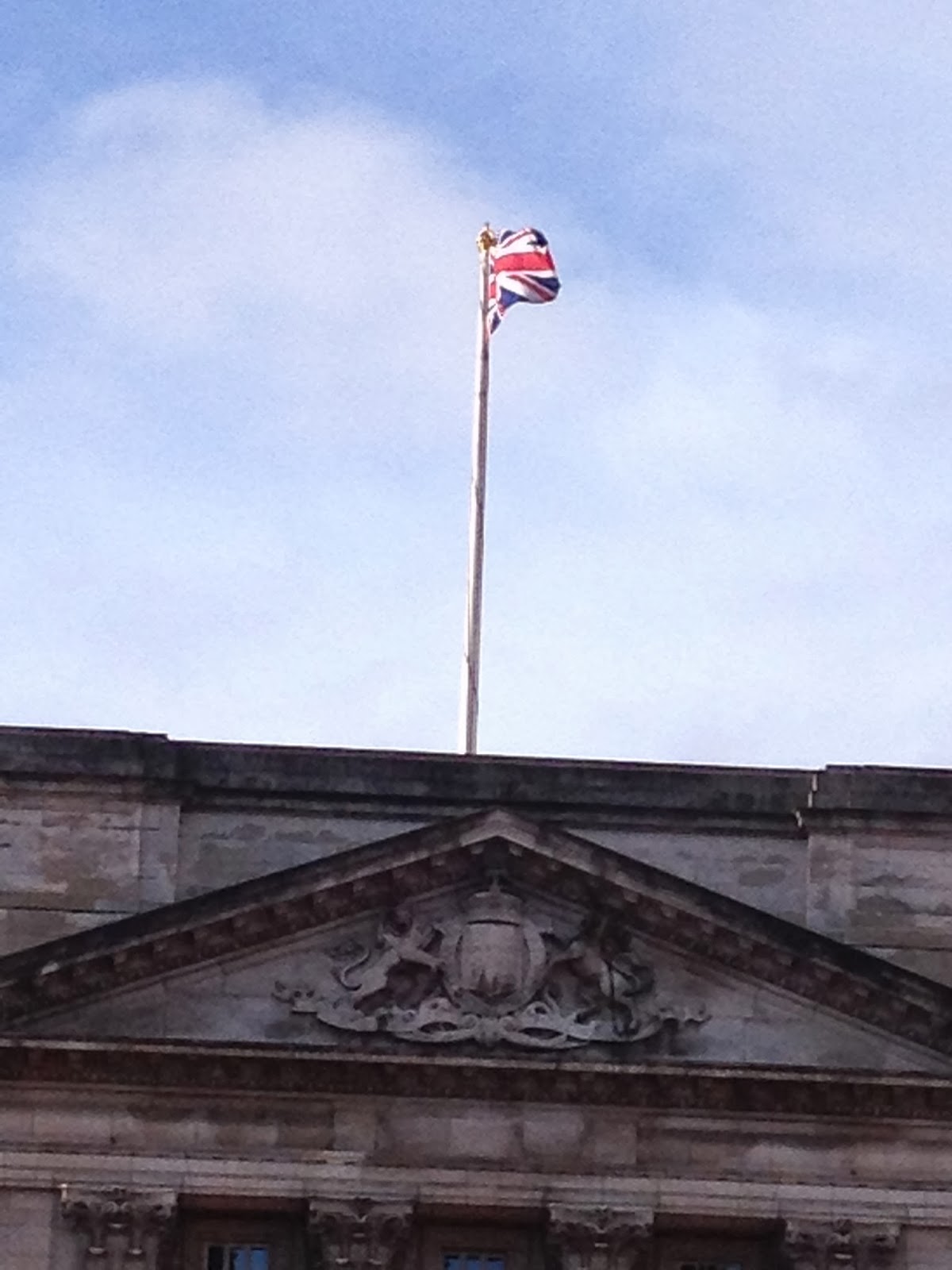 The flag was flying, meaning that the queen was not in residence. 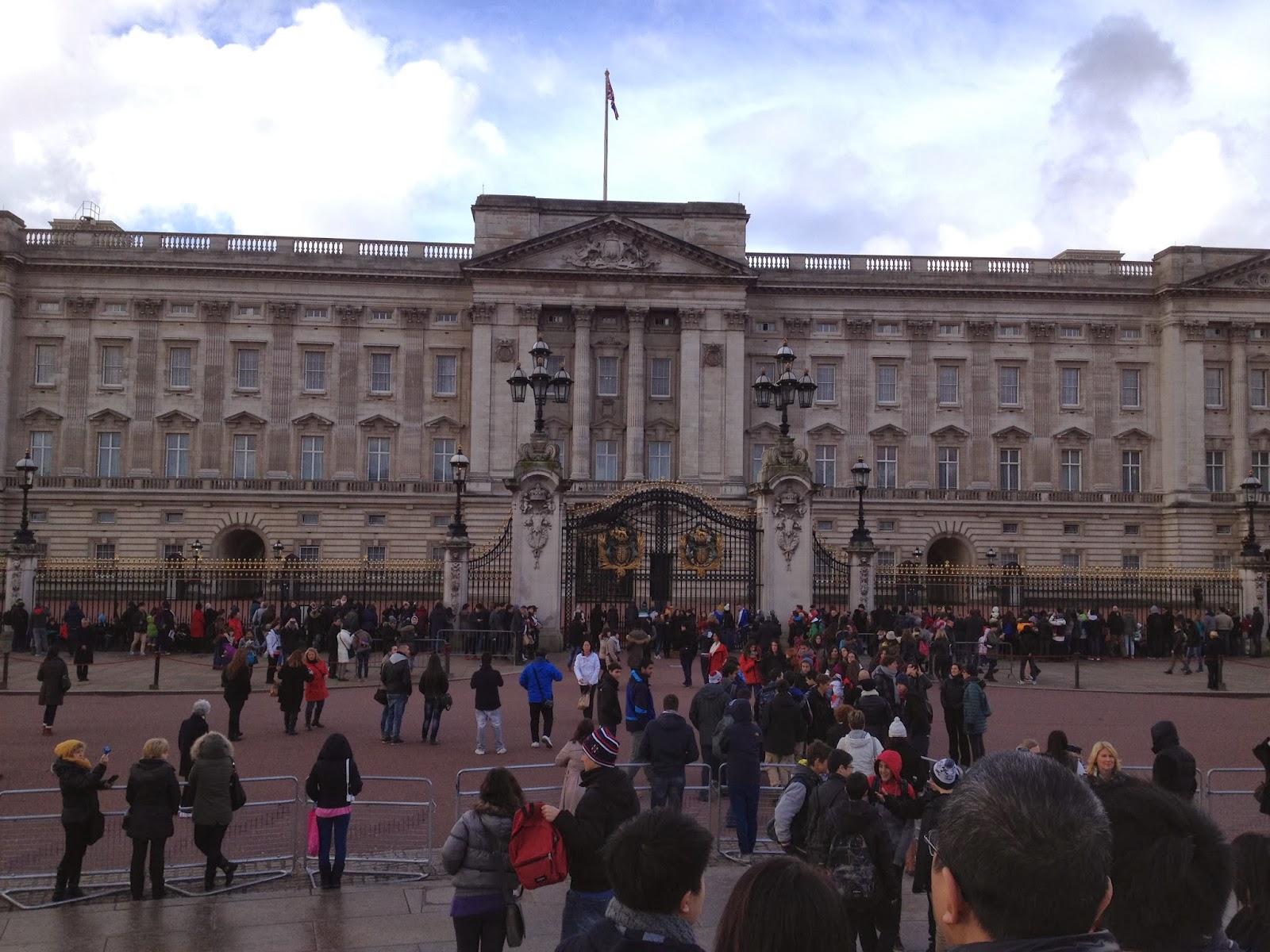 So, we arrived about an 1 1/4 hours before the actual change.  It was recommended to stand at the Victoria Memorial, since it was higher and the views were better.  But we didn't want to wait all that time, so we went walking. 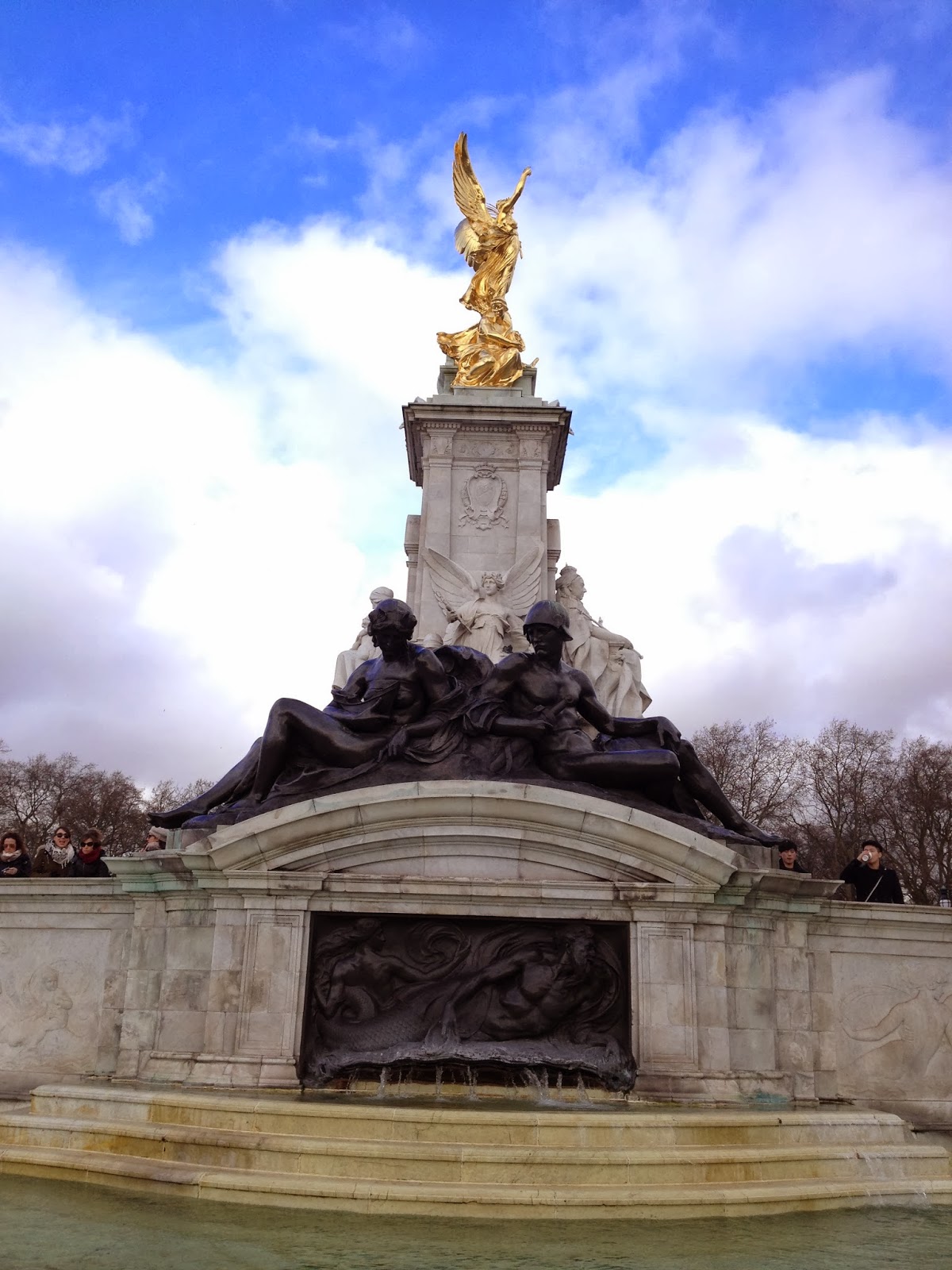 Another view of the memorial.  I loved the blue sky!  It came and went throughout the day. 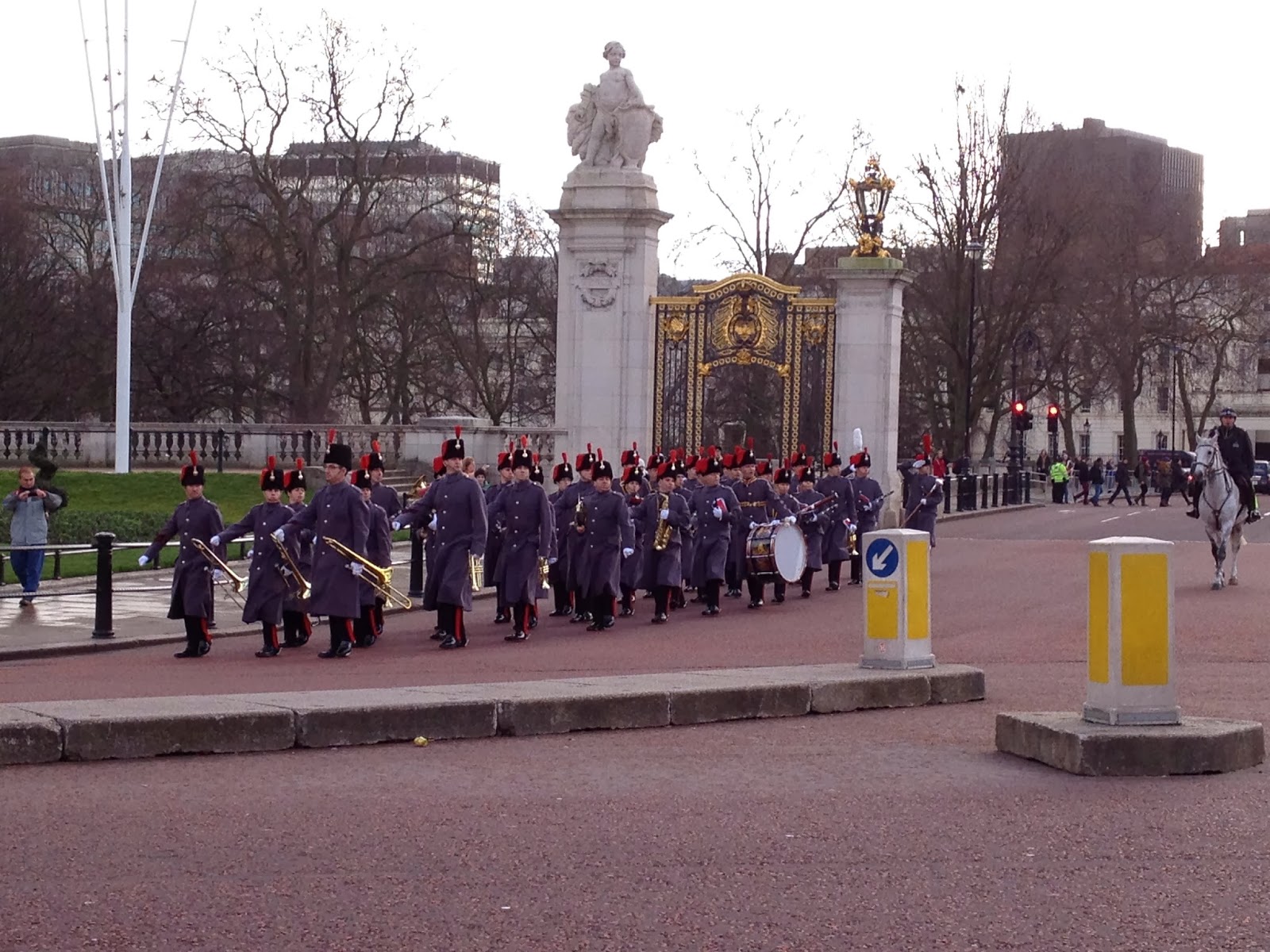 As we were walking along, we saw the band.  Now the thing about winter is that the traditional red tunics are covered by gray coats.  Nice coats, but not as photogenic as the red. 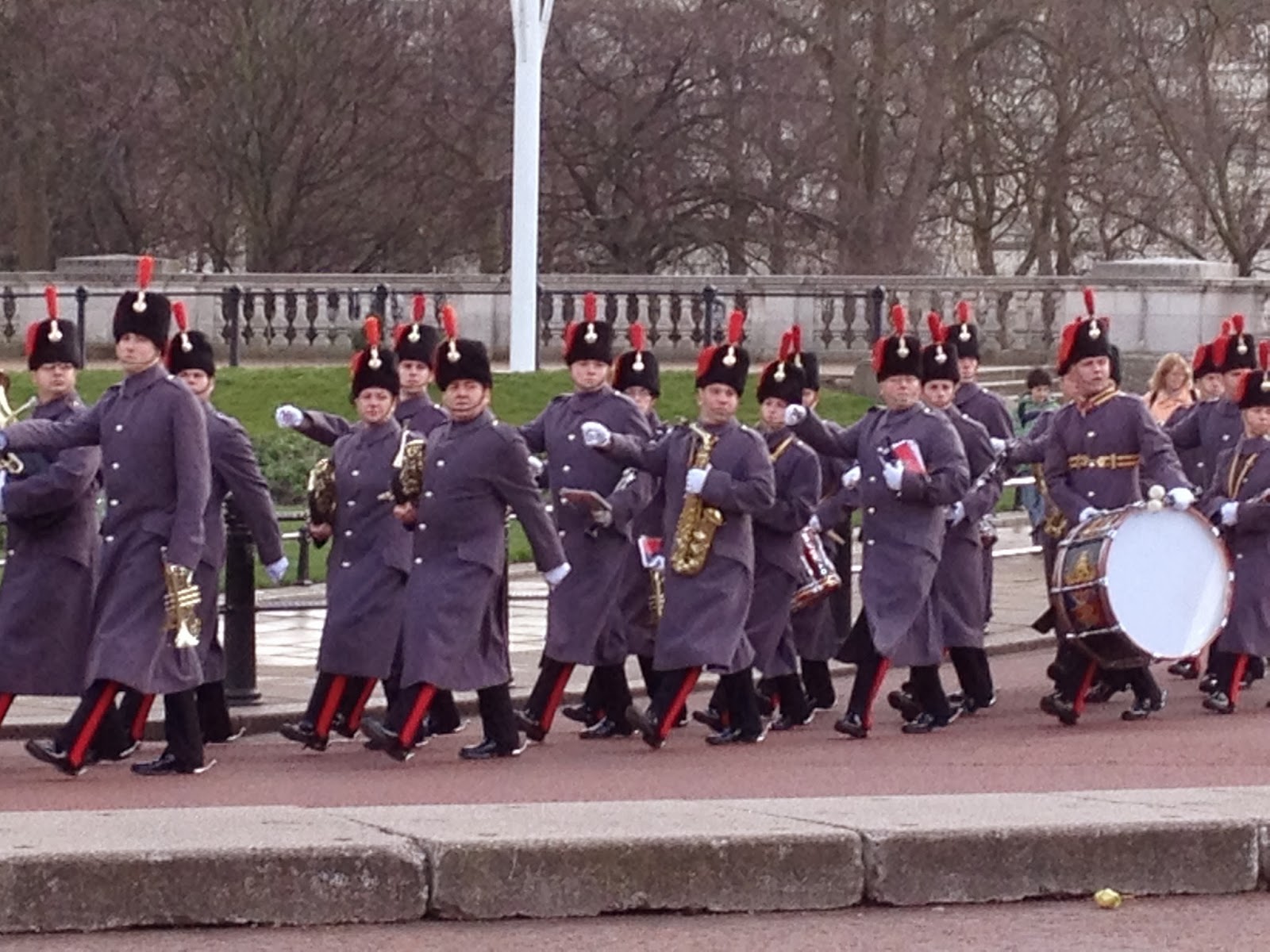 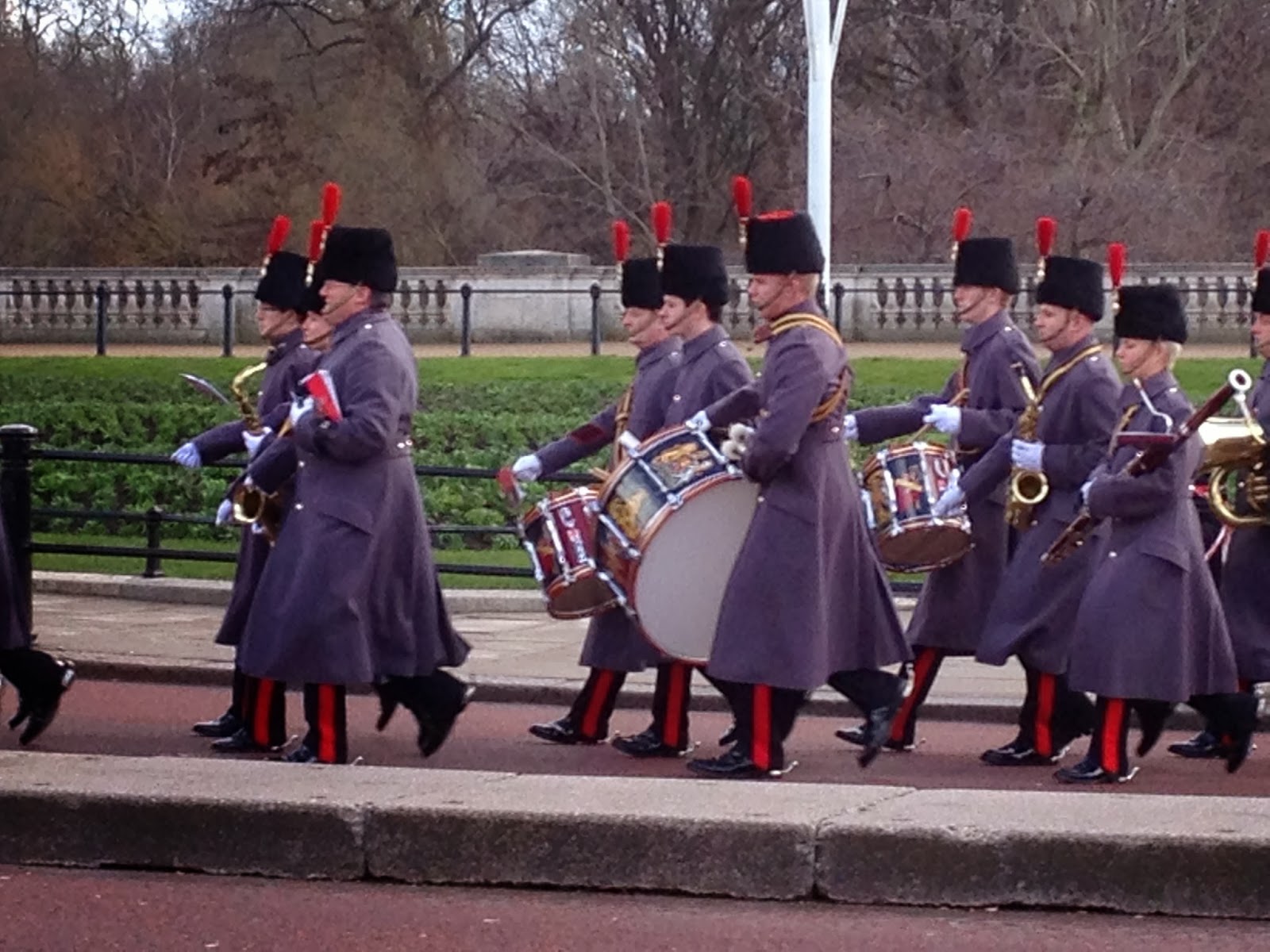 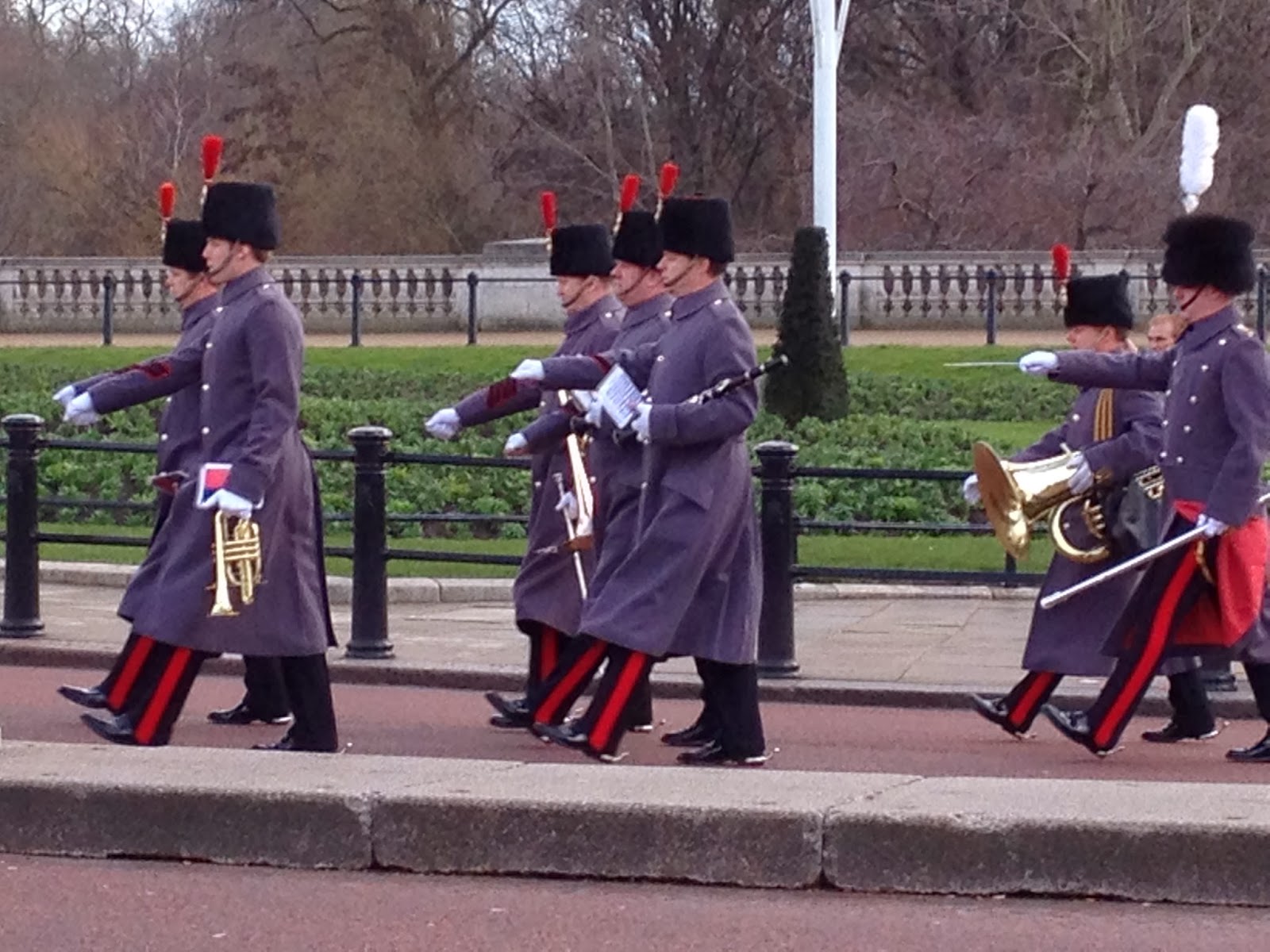 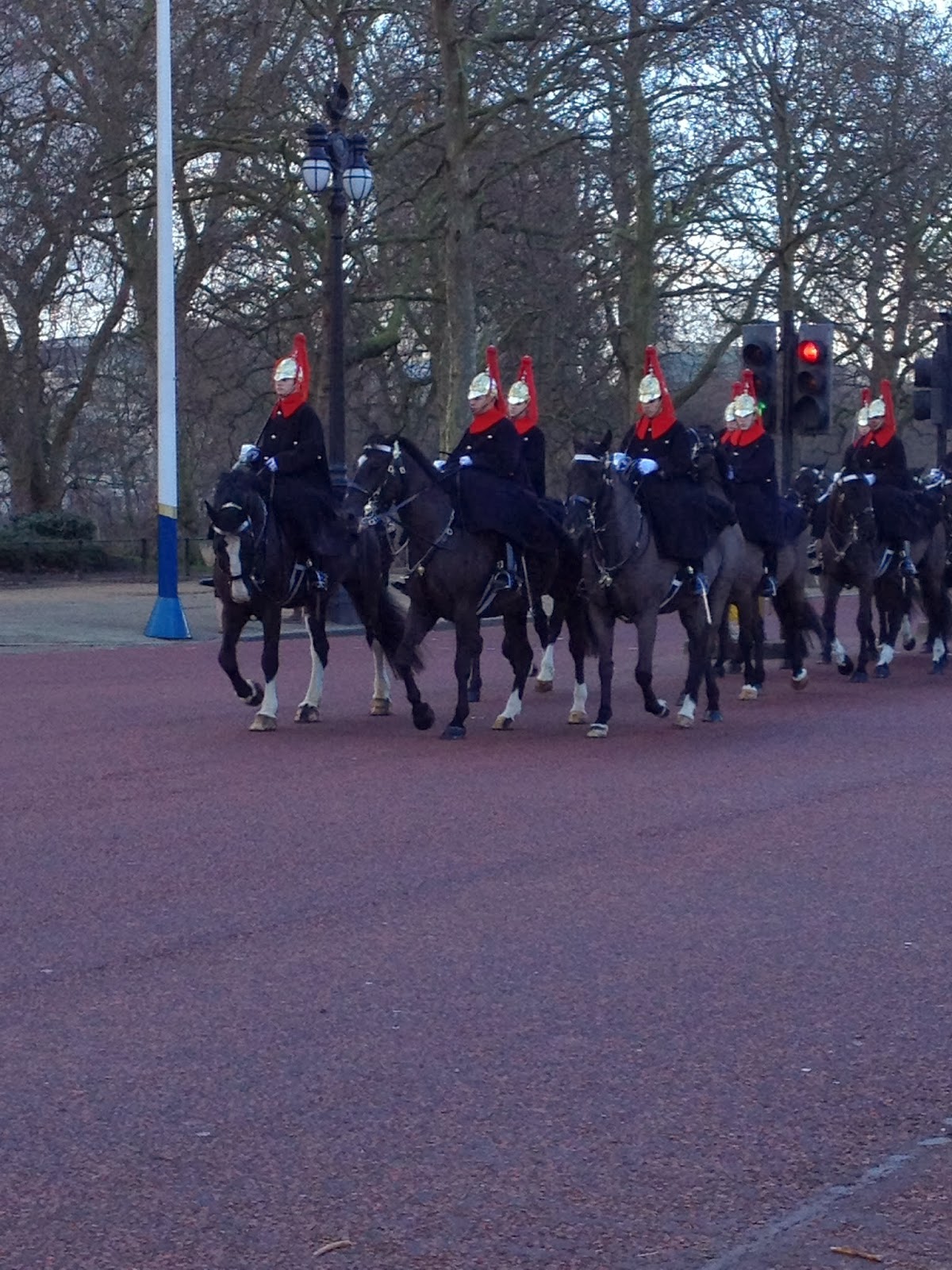 Next came the horses. 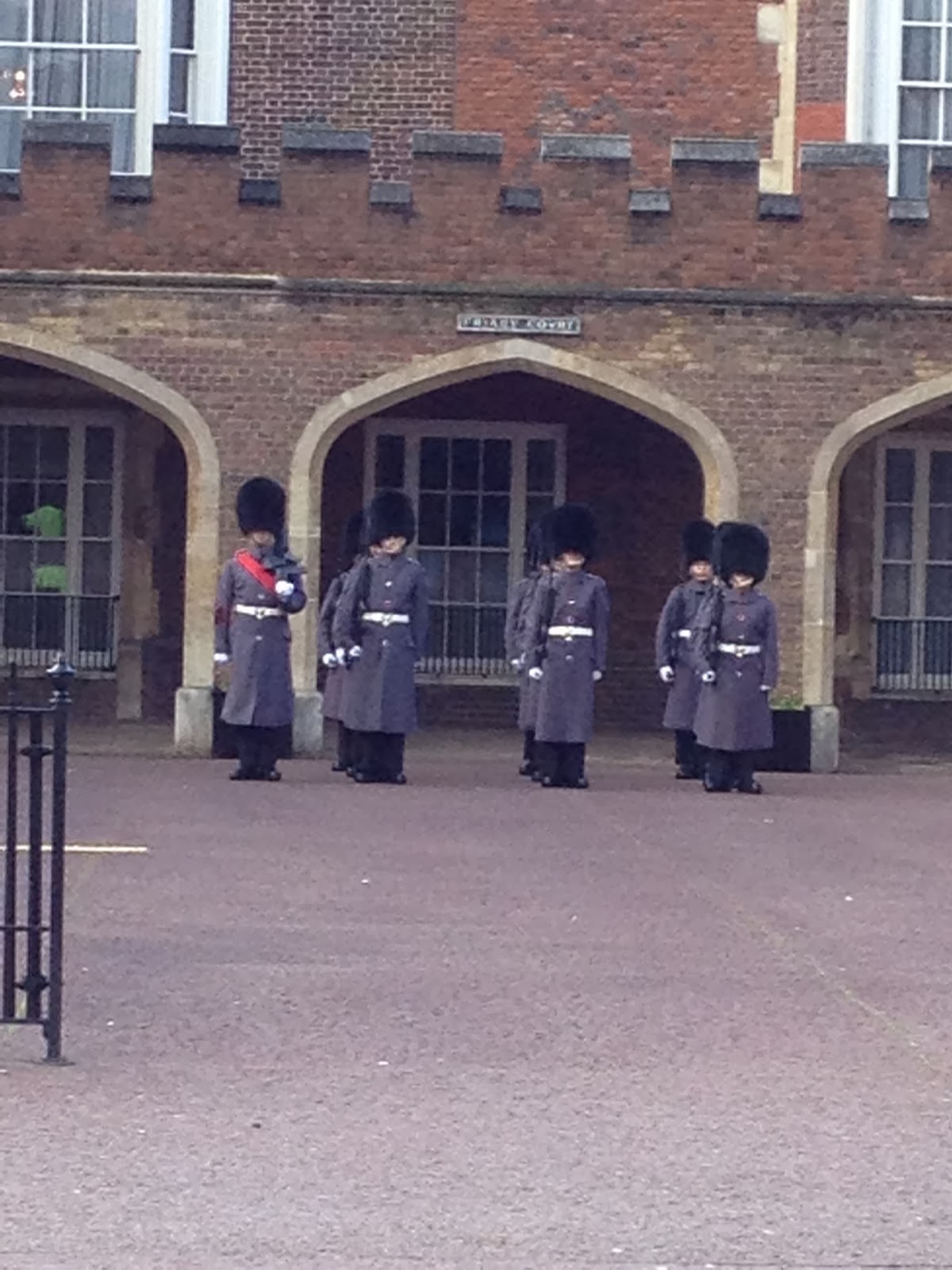 I had done a little research about viewing the changing of the guard.  One of the recommendations was to actual stand in front of the stable yard of St. James Palace, just off the Pall Mall.   So that is where we walked to next. 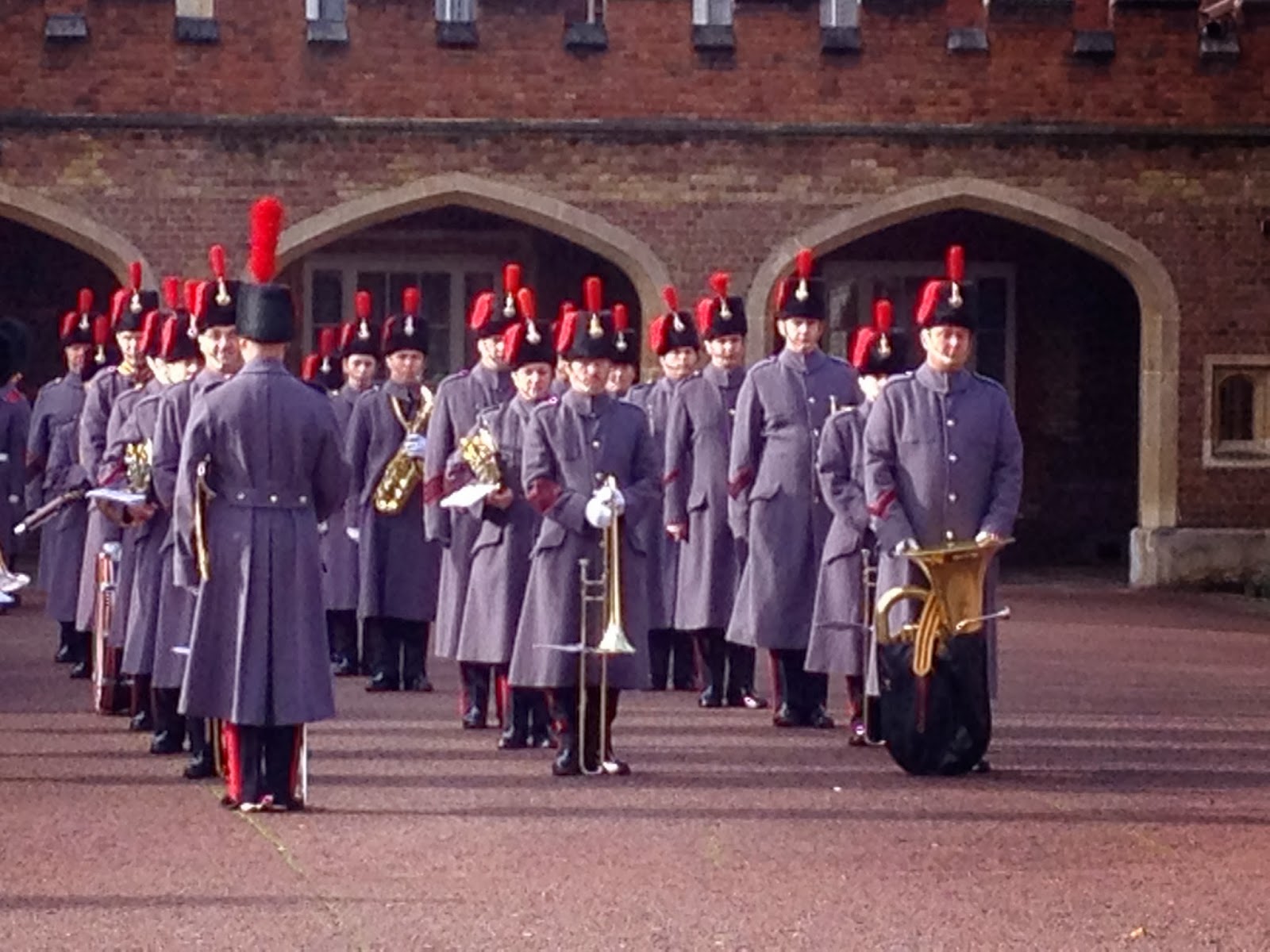 The band is preparing to march. 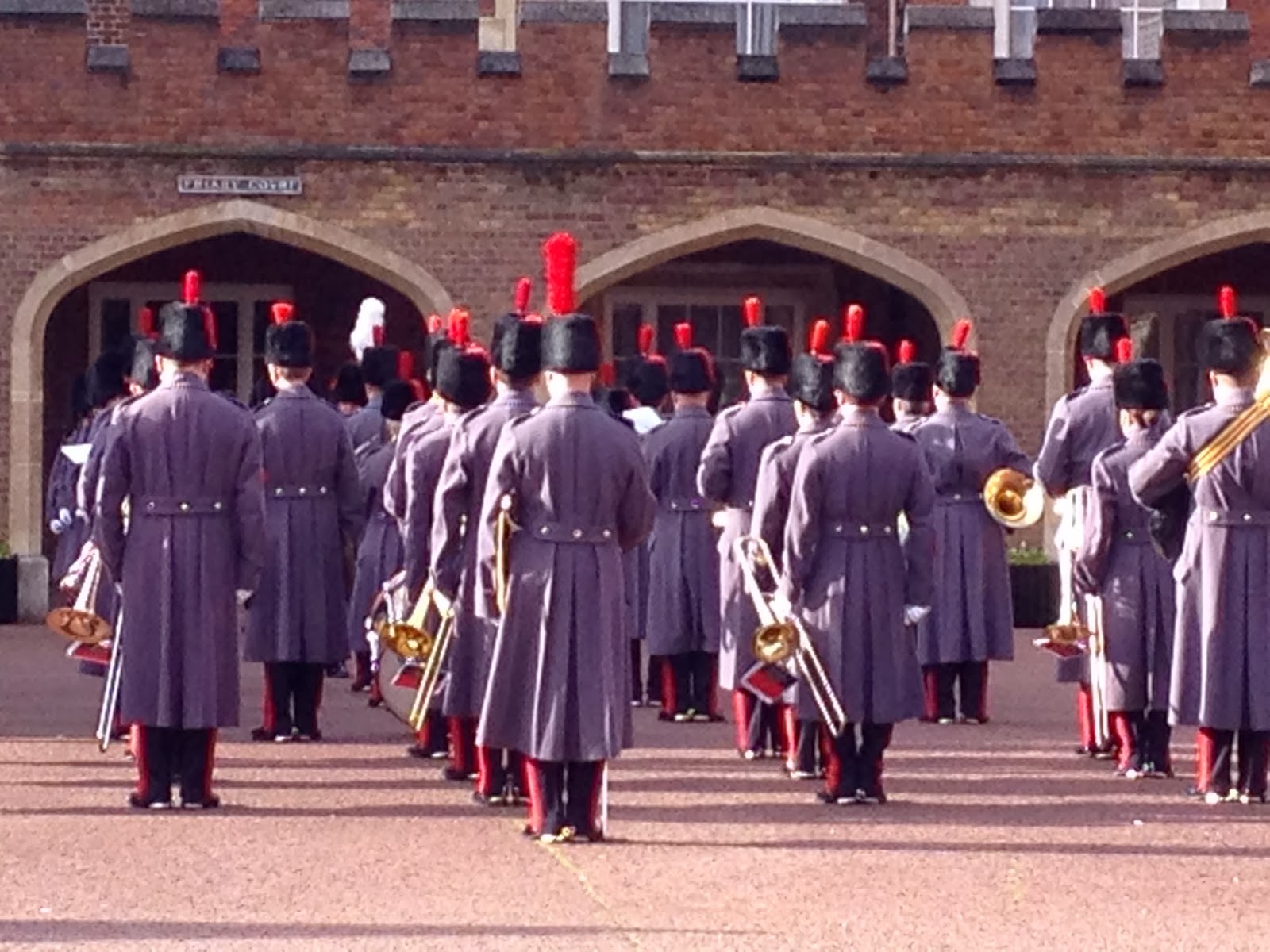 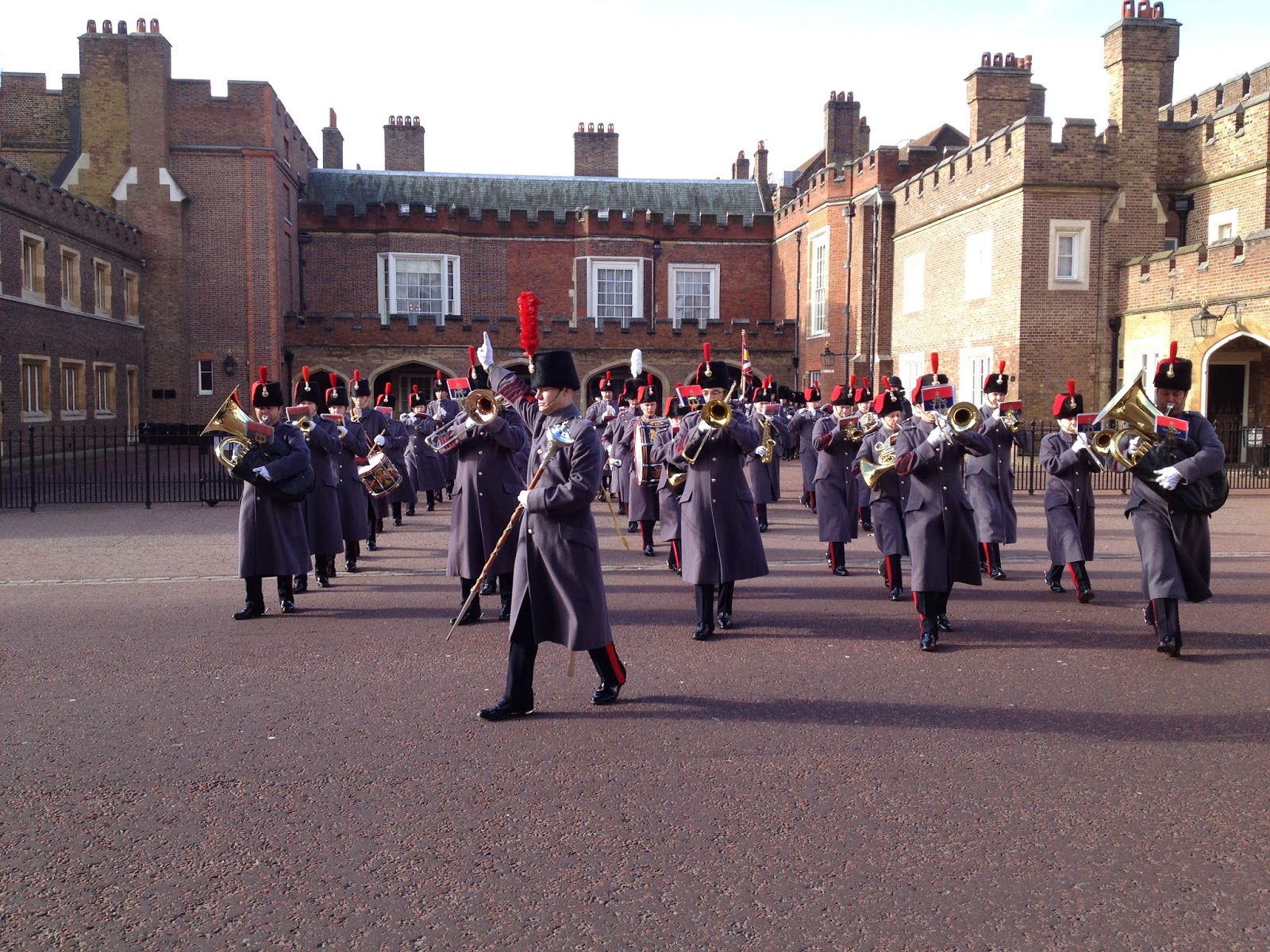 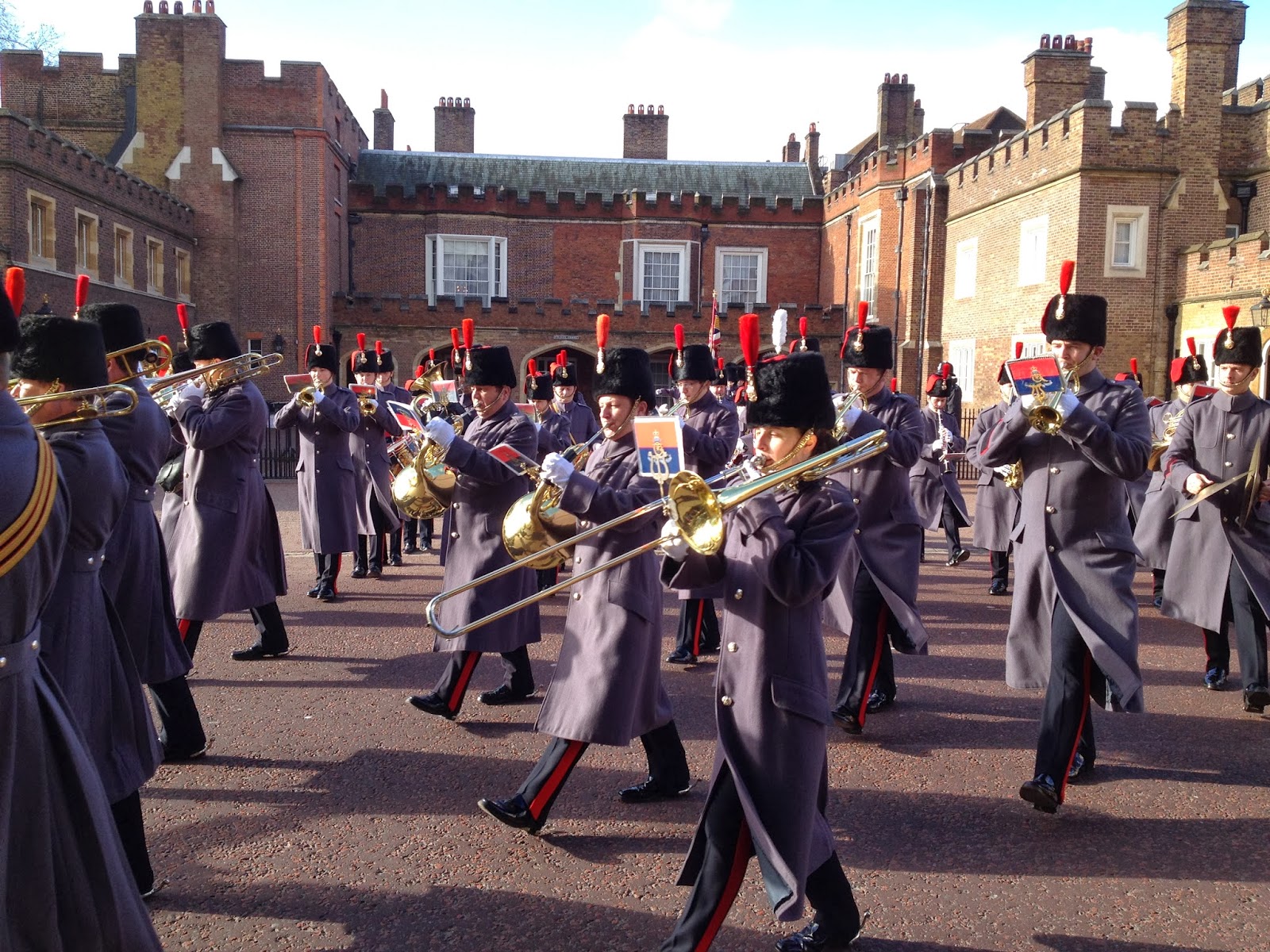 The band, marching to Buckingham. 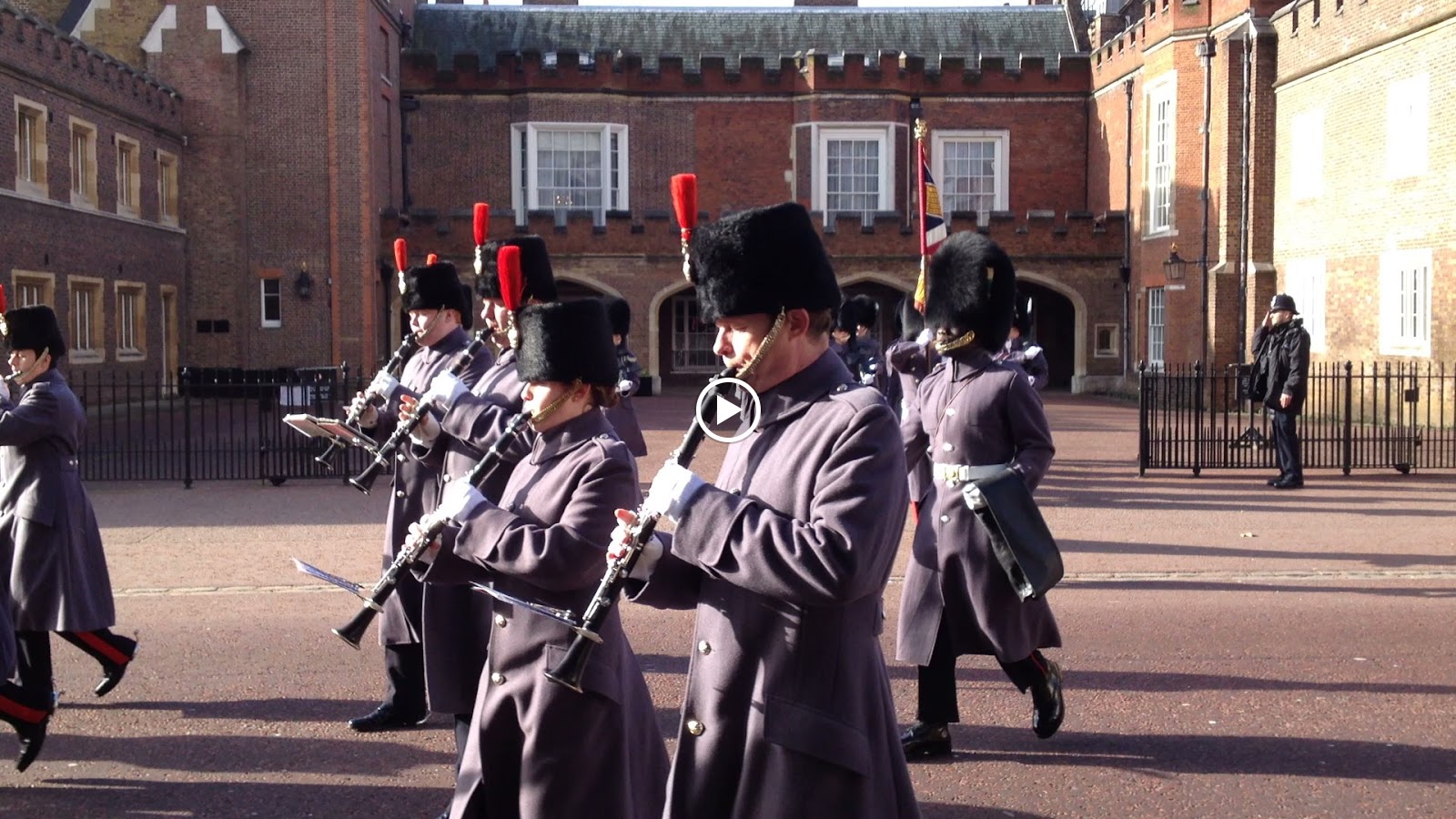 Here are the guards, right behind the band.  I don't know what happened to my sound in this video.  We enjoyed watching the guards and bands from this view.  We could have stood in front of Buckingham Palace itself and not seen as much! 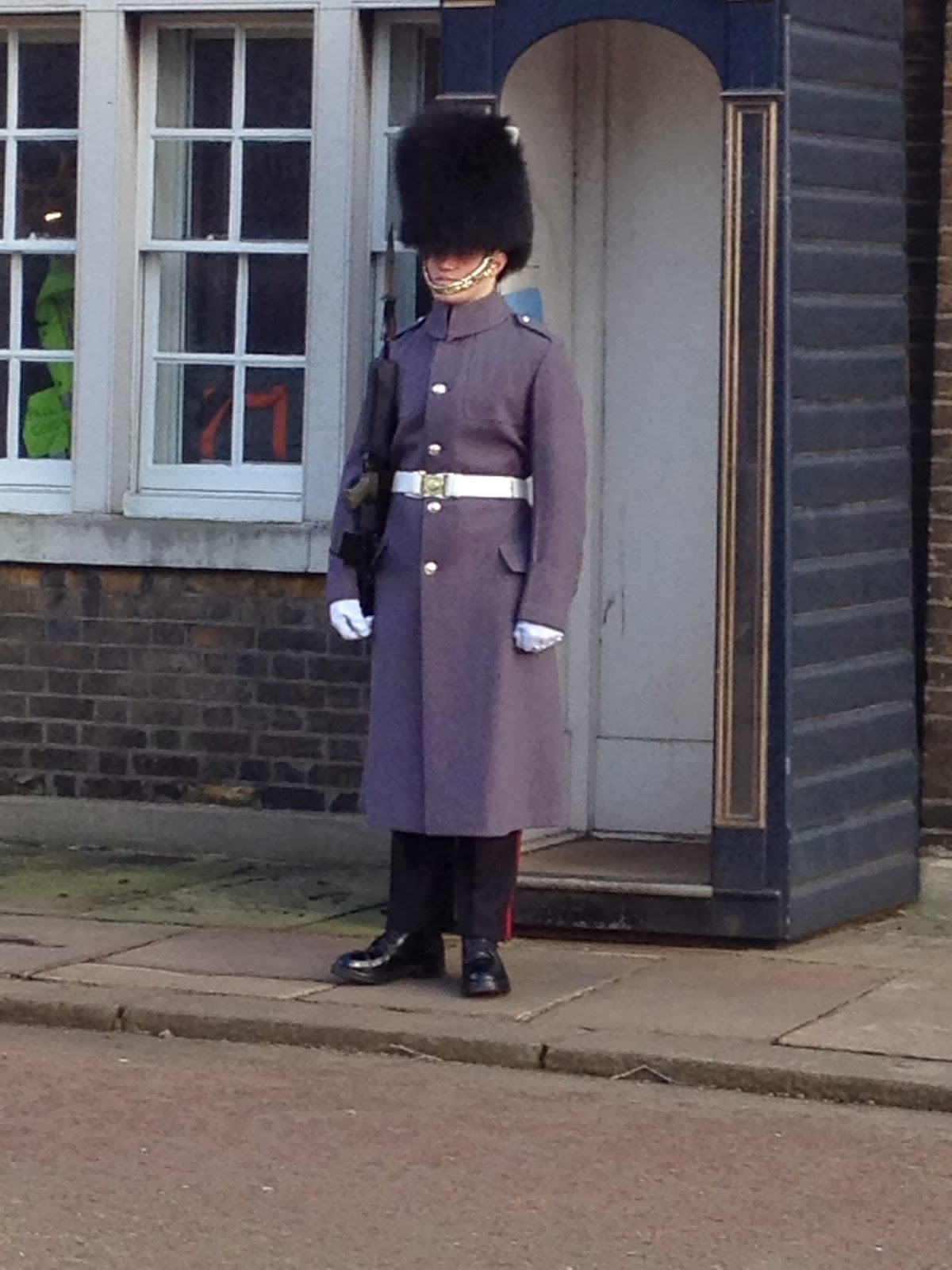 When one goes to see the 'changing of the guard', that means you are there to see these guys being relieved by their replacements.  These guards are actually at the back entrance to St. James Palace.  There is a chain between us and them, but only about ten feet or so.  Unlike Buckingham Palace, where there are the huge gates and a long distance between us and the guards.  We were talking to a very nice, older English man.  He was giving us lots of information.  For instance, the red tunics the guards wear cost about 700 pounds, or $1140.  The hats are real bearskin.  If the guards' father or grandfather was a guard, they may wear those hats.  Some of the hats are up to 150 years old!  One more thing, the rifles are very heavy. 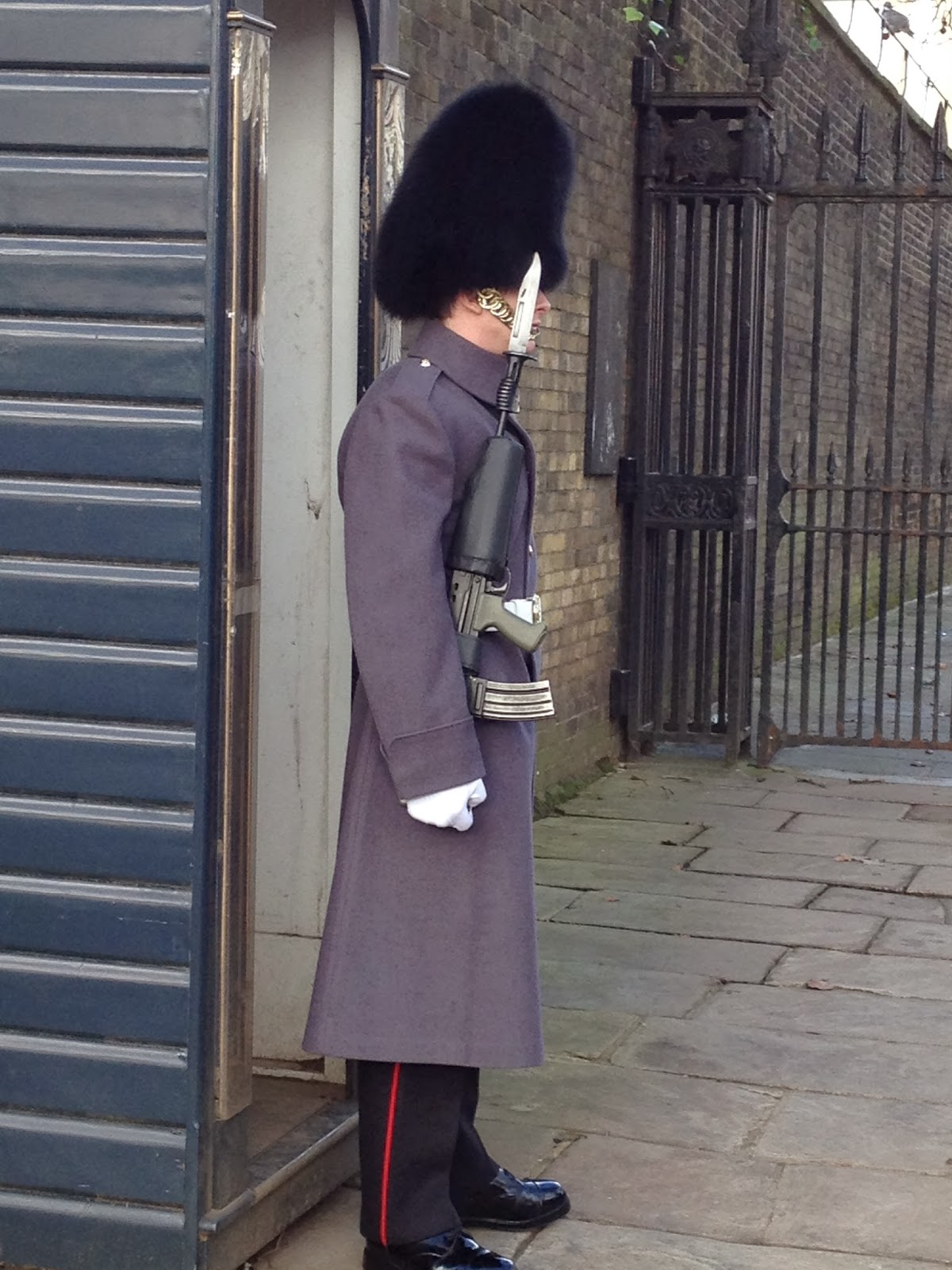 In the winter, the guards are on duty for two hours, off for four.  When they are relieved with the new guards, the new guards will receive instructions.  Our English friend told us this was the most interesting part.  If you got close enough, you can hear the instructions.  You could learn which royals are in residence at that time, and what functions may be going on.  But that required another 30 minutes of waiting, so we decided to walk on. 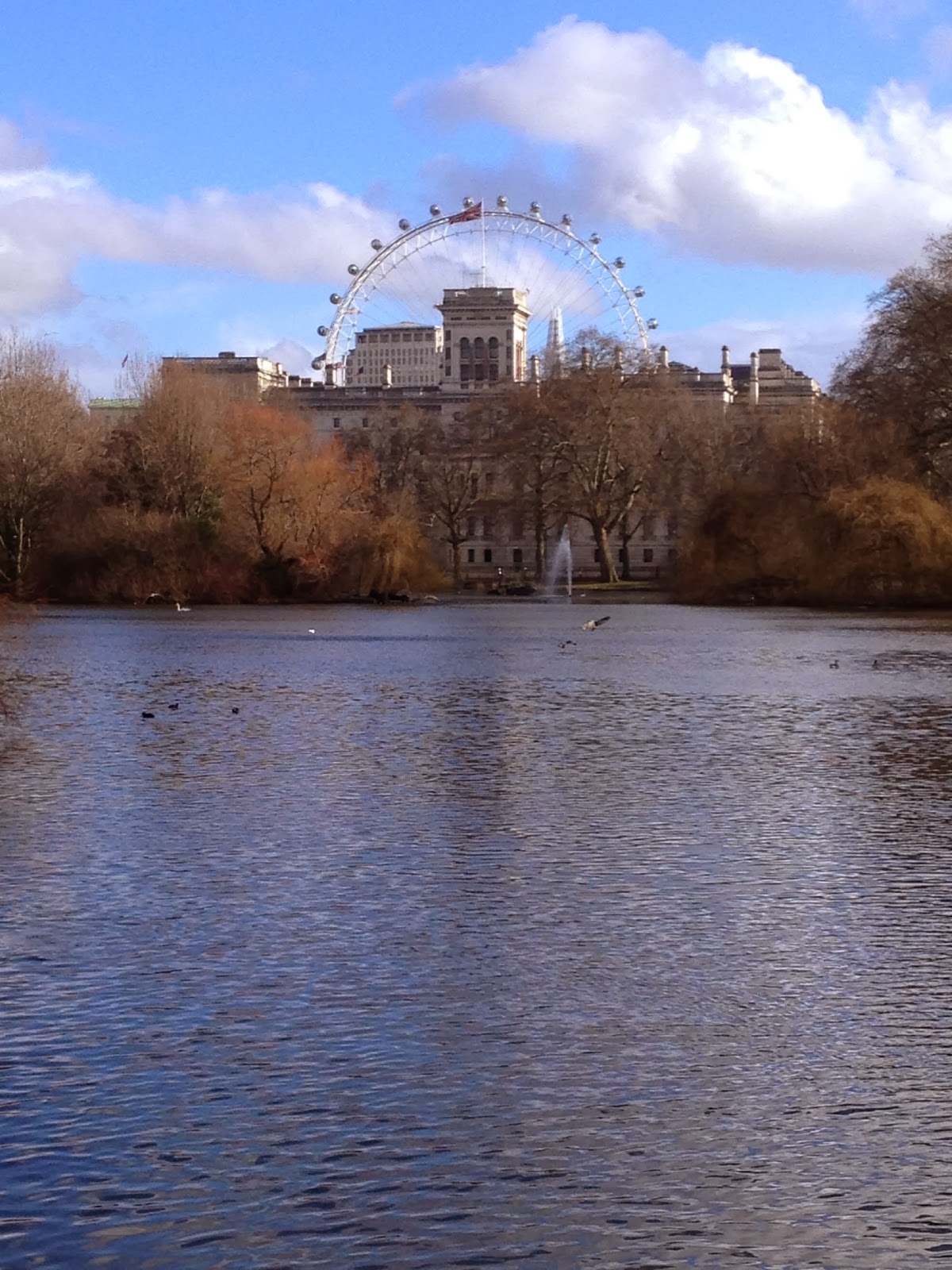 Across from the palace is St. James park.  Loved seeing the London Eye in the distance. All this walking was great therapy for Joe! 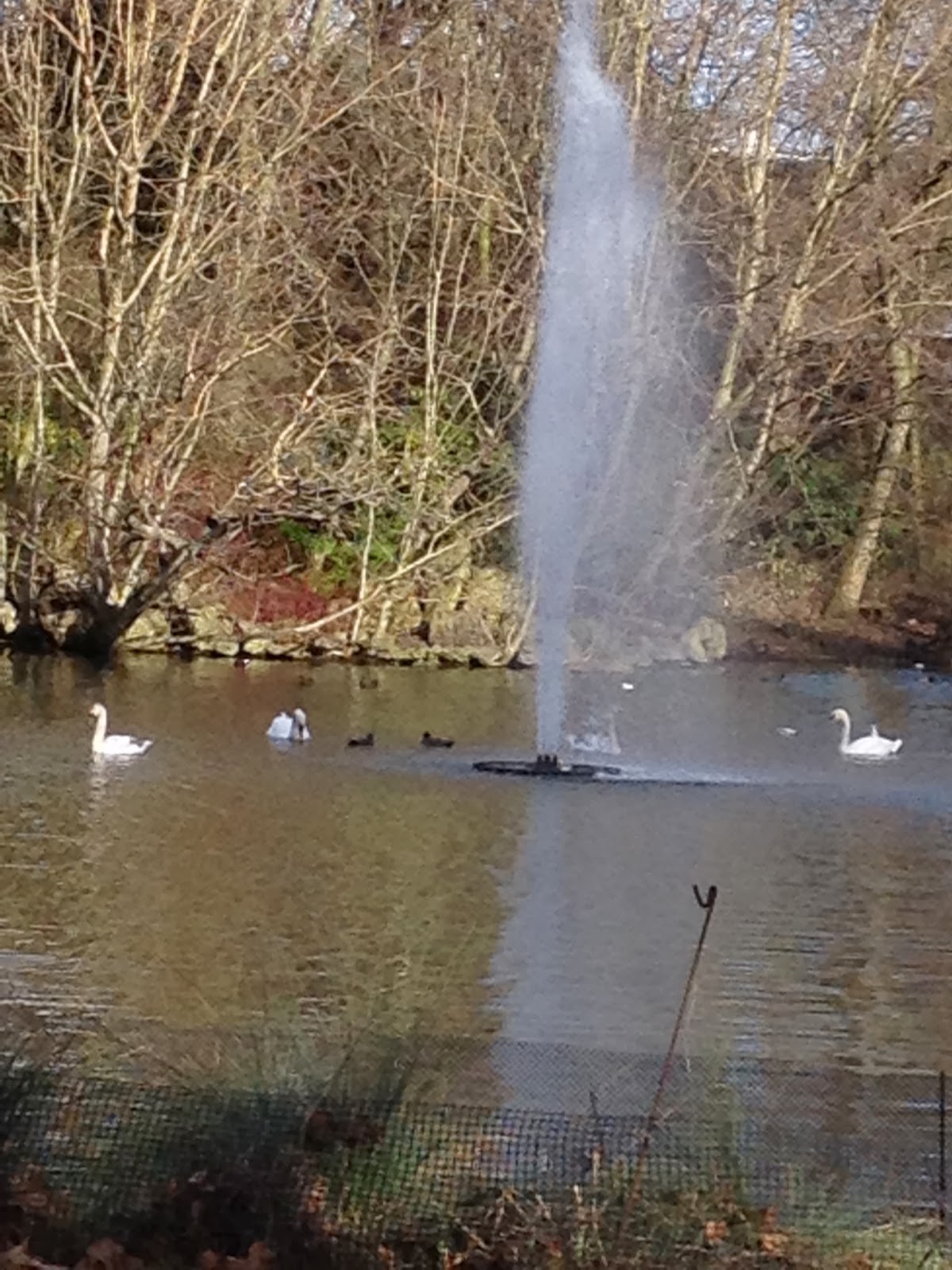 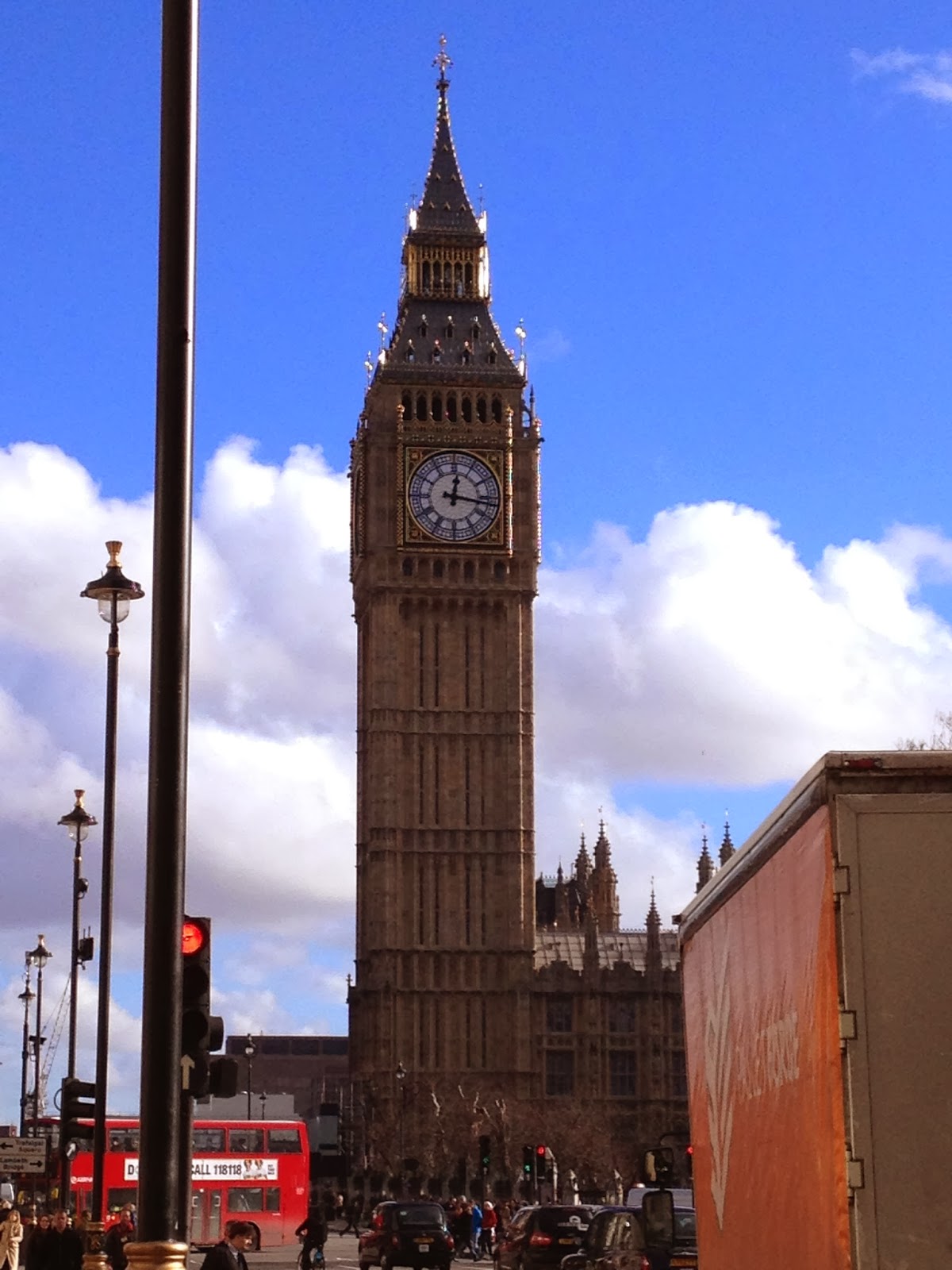 Our walk took us by Big Ben.  As I took my picture, Joe asked my how many pictures I had of the Big Ben (this is my third time in London.)  I said one less than I needed!  :) 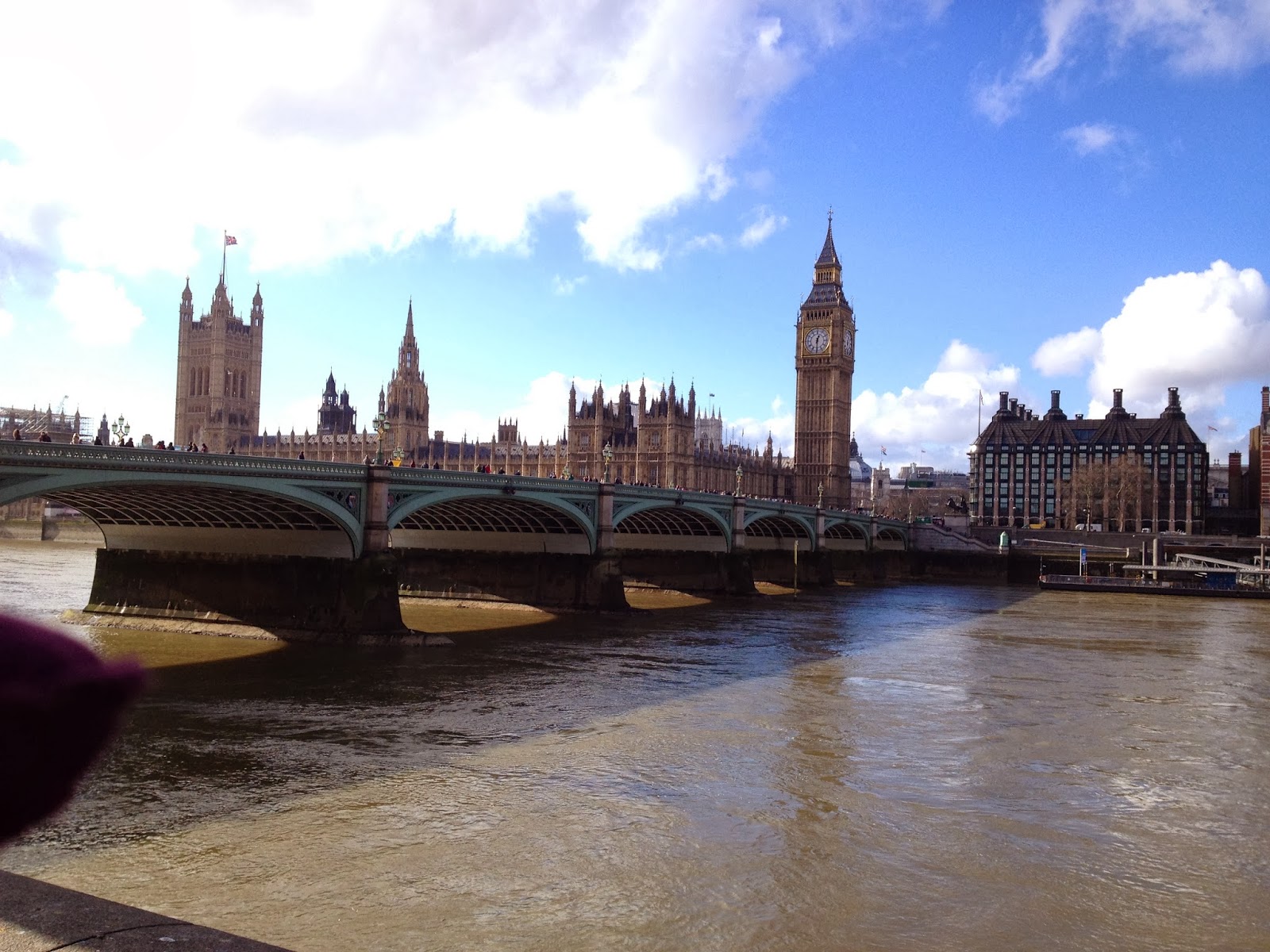 So why am I including a picture of a faucet in this post?  I always see a new public faucet as a challenge.  How does it turn on?  Where does one place their hands?  Well, this one takes automated faucets to a whole new level.  So, what are the side arms on this faucet??  Hand dryers!!  I could hear the hand dryers, but couldn't find them.  A kind lady gave me a demonstration and showed me to place my hands under the side bars and voila!  Dry hands!  So if you are ever in the building right next to the London Eye, you too will know how to dry your hands.

We are now back home, in beautiful Oman.
Posted by Wanda Holmes at 4:01 PM