This blog post is 20 months in the making.  I have never blogged about how it is to drive here in Oman.  I remember the first time I came to Muscat, on our house-hunting trip.  I sat in the mall (Muscat Grand Mall, which has the worst parking garage!) and had one of those moments, like what in the world was I thinking when I agreed to move here???  They drive crazy here and I won't know my way around and if I get in an accident I don't speak Arabic and if I even find my way into this crazy mall parking garage I won't be able to park in the tiny spots.  Whew!  I started out driving to the corner grocery store and back.  Then I would drive to the the further grocery store, and then to the mall in the outskirts of Muscat.  It took a while before I ventured to Lulu's, more centrally located.  But it didn't take long before I was whizzing around Muscat.  I just didn't know that that day in the mall.

Joe lived in Muscat for a couple of months while I was wrapping things up in Chicago.  So he was an 'experienced' Muscat driver by the time I moved here.  The first thing he told me was about the exit signs.  It doesn't matter if the sign says ...  they are all talking about the same exit!  I have mentioned before that spelling in Oman is not always consistent.  I get it.  When you are switching from a totally different alphabet and are spelling words phonetically, there will be some inconsistencies.  That still doesn't really explain why the road signs at the same exit are spelled differently, but they are.  At more than one exit! 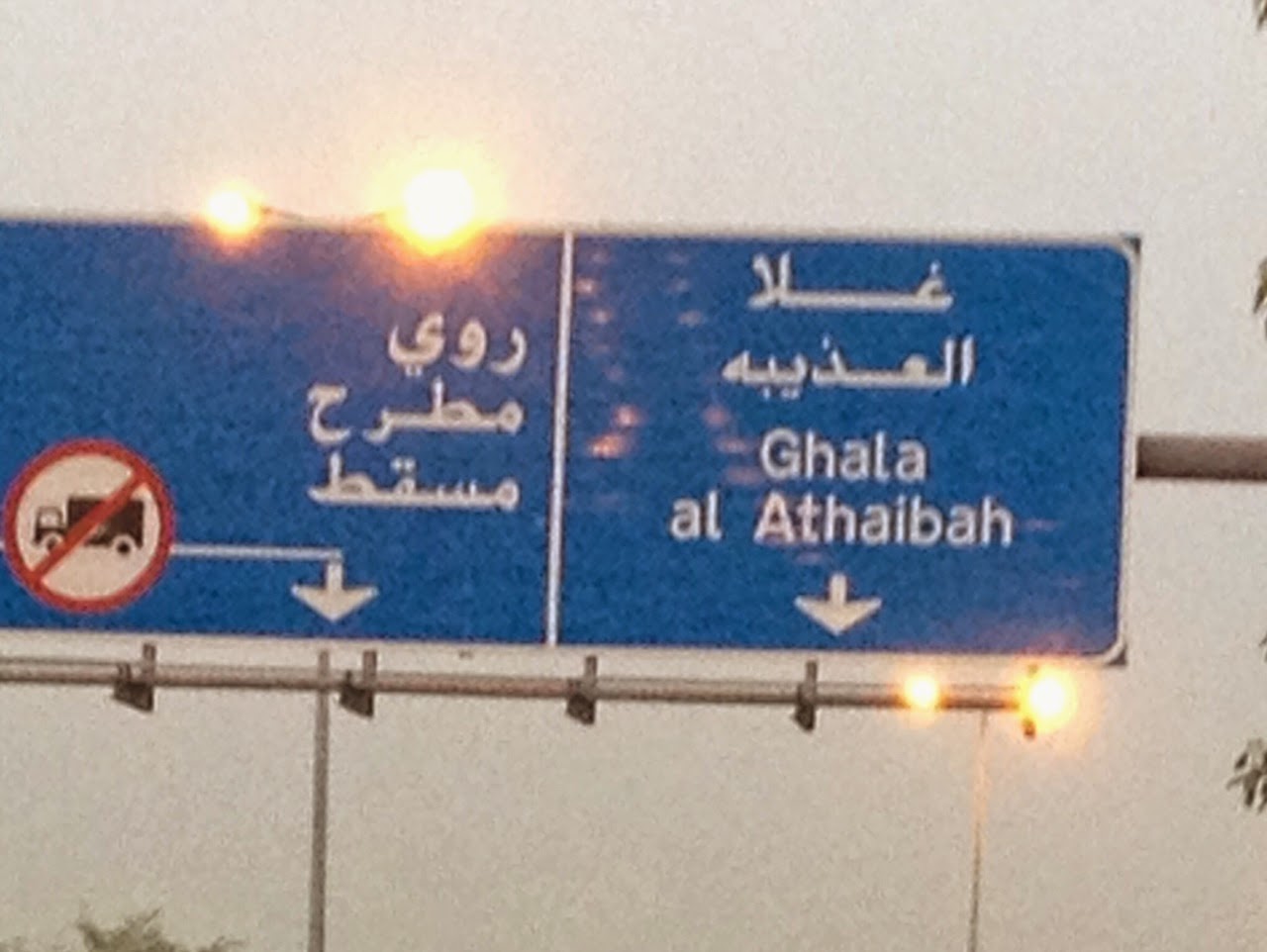 If you are driving to AZAIBA from the airport, this is the first exit sign you see.  Athaibah.  By the way, Azaiba is both an area and a street. 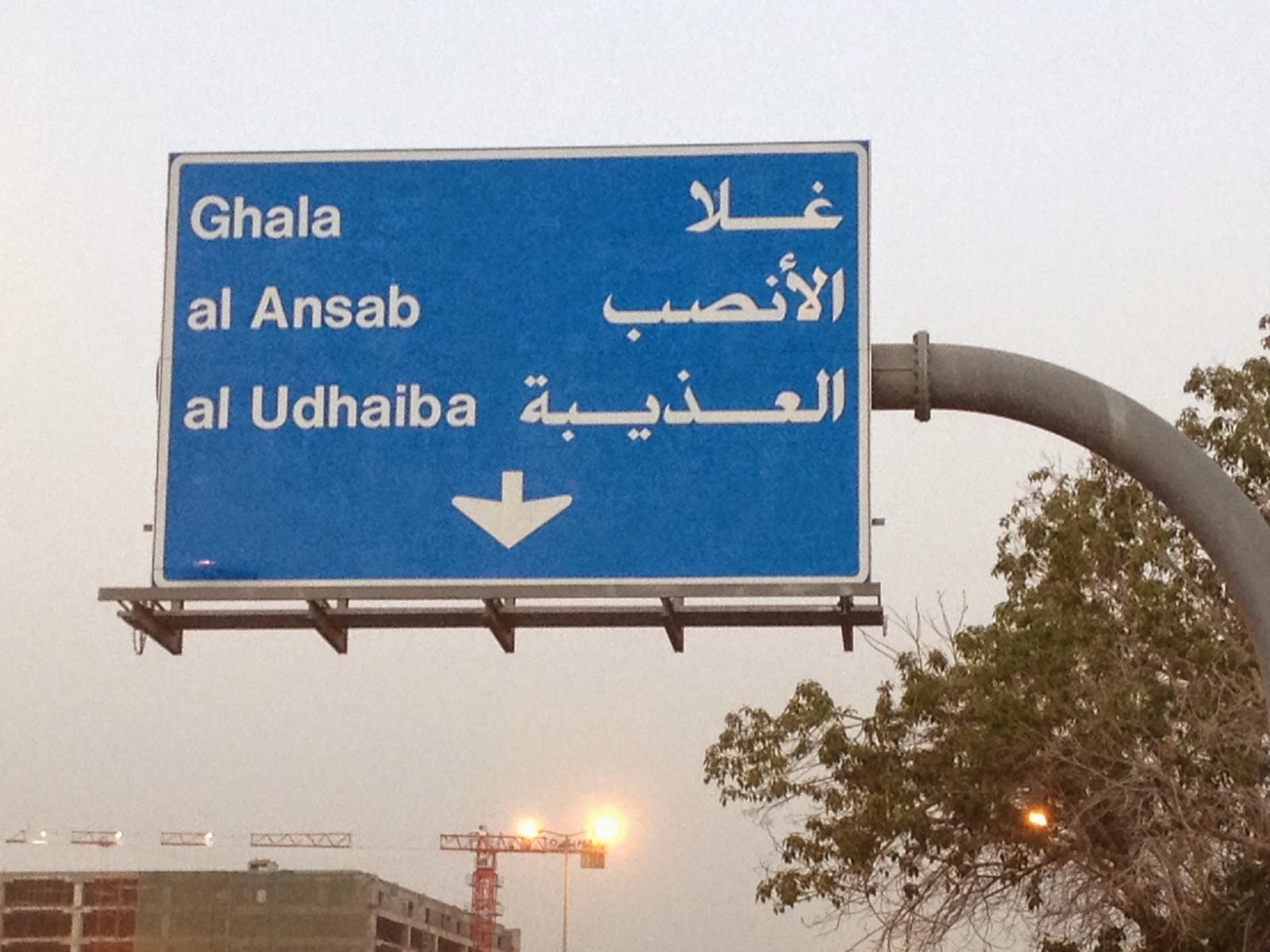 Here is the second sign for this exit-- Udhaiba! 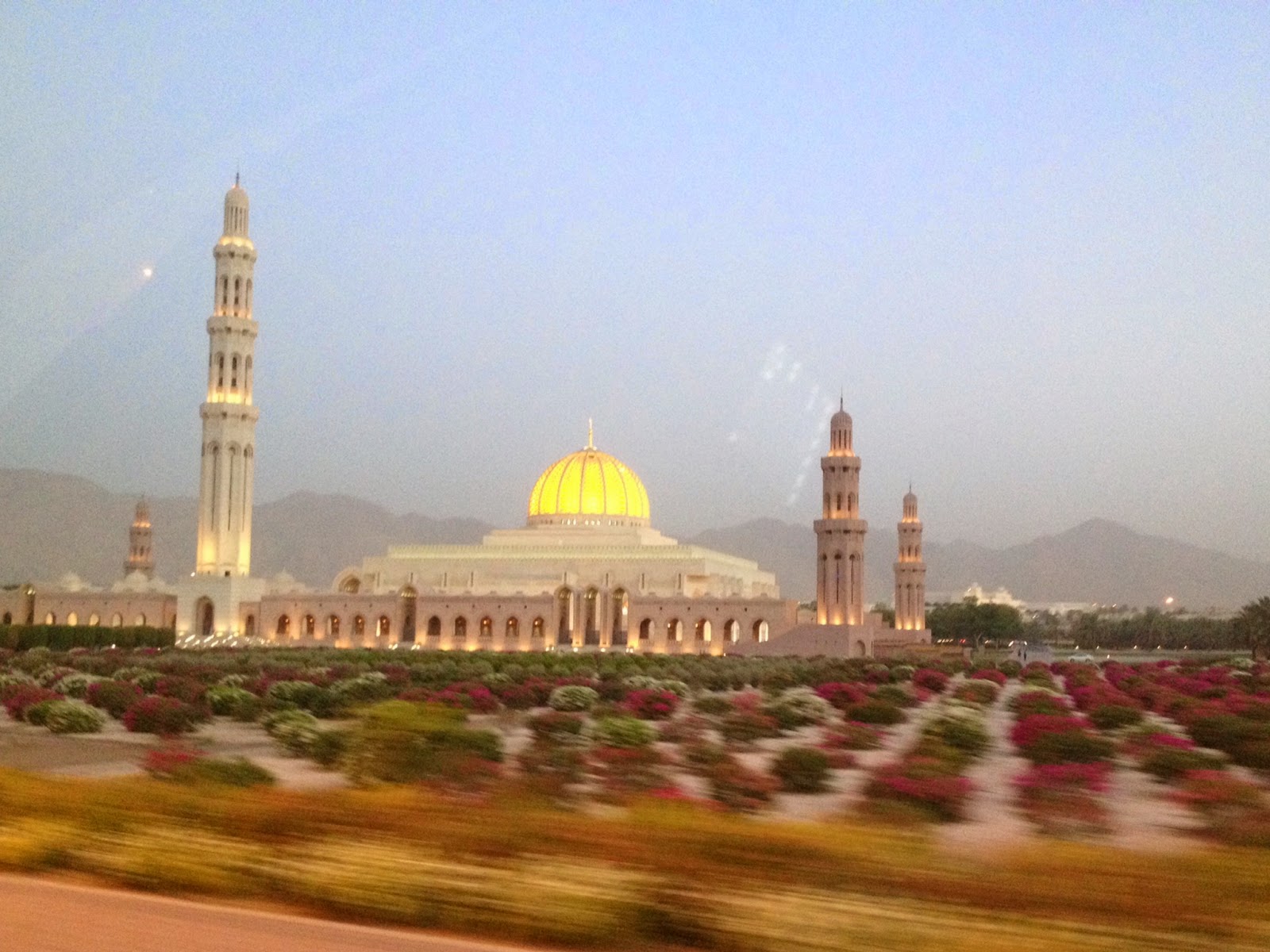 Random picture.  As I was taking the two exit pictures, (and no, I was not driving) I snapped this picture of the Sultan Qaboos Grand Mosque.  Sigh.  I will miss seeing this view most days. 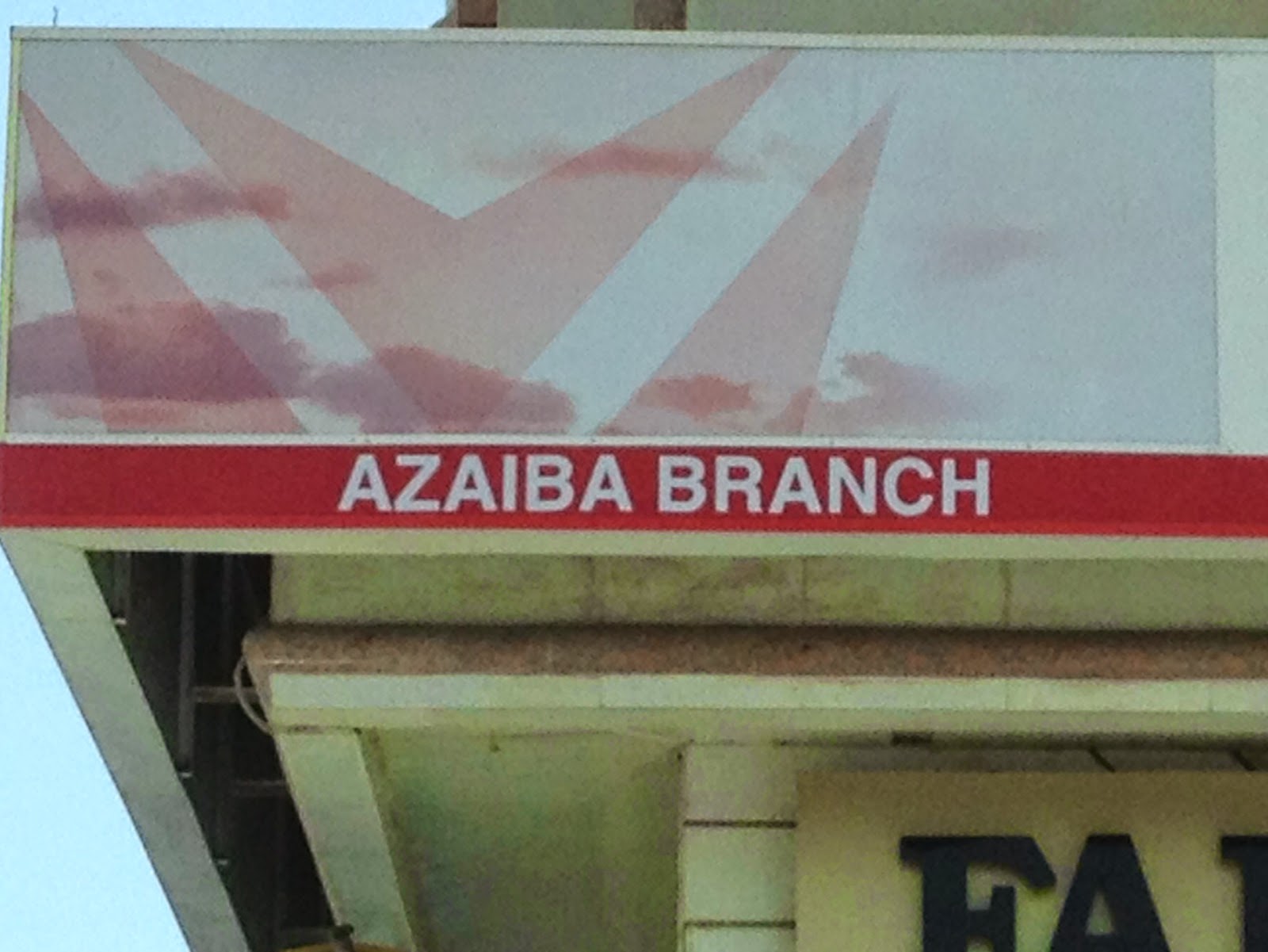 Back to Azaiba.  This bank branch actually got the name right. 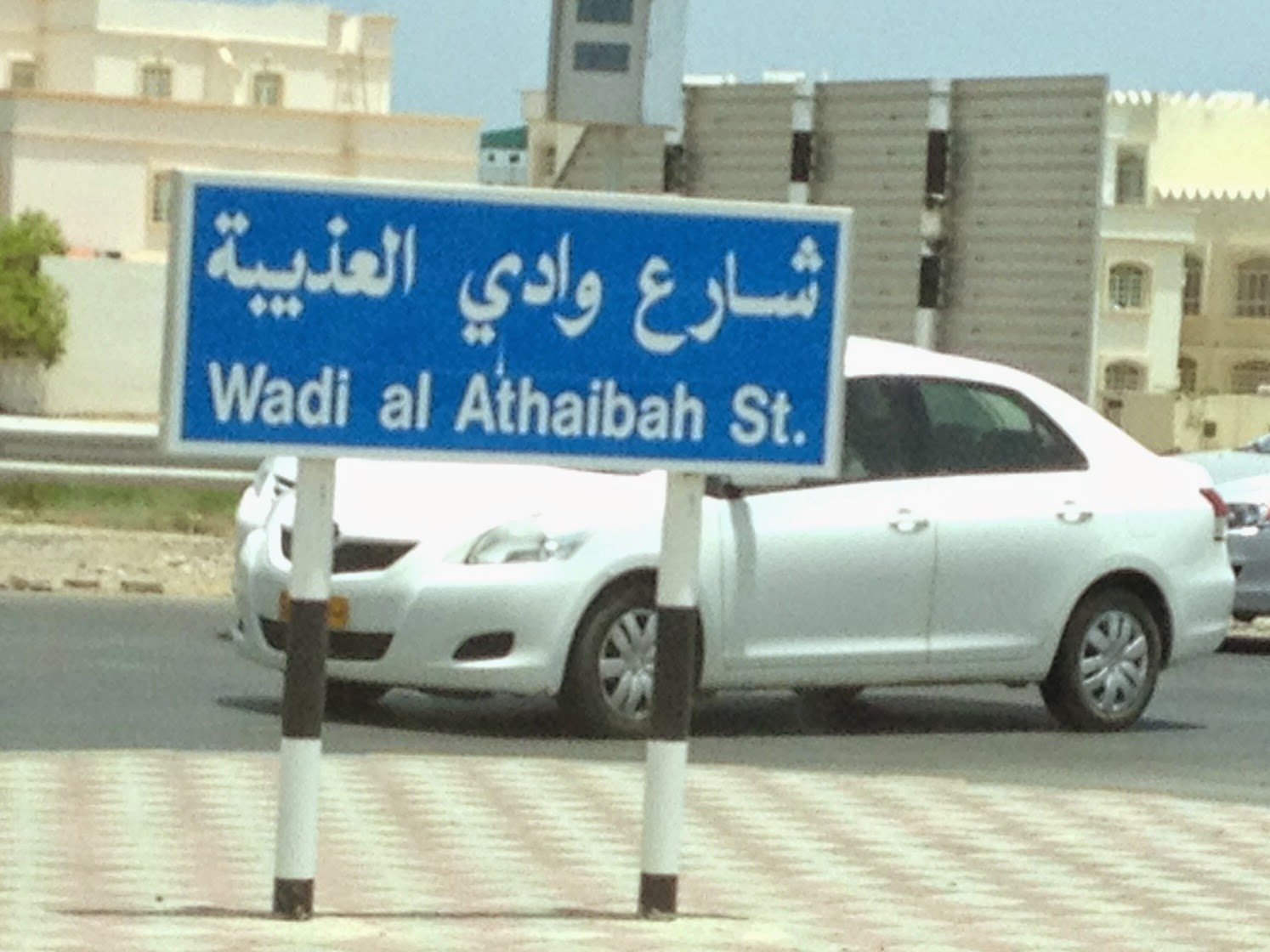 Here is a street sign for Azaiba Street.  There happens to be a wadi, or large drainage ditch here, so hence the addition of the word wadi. 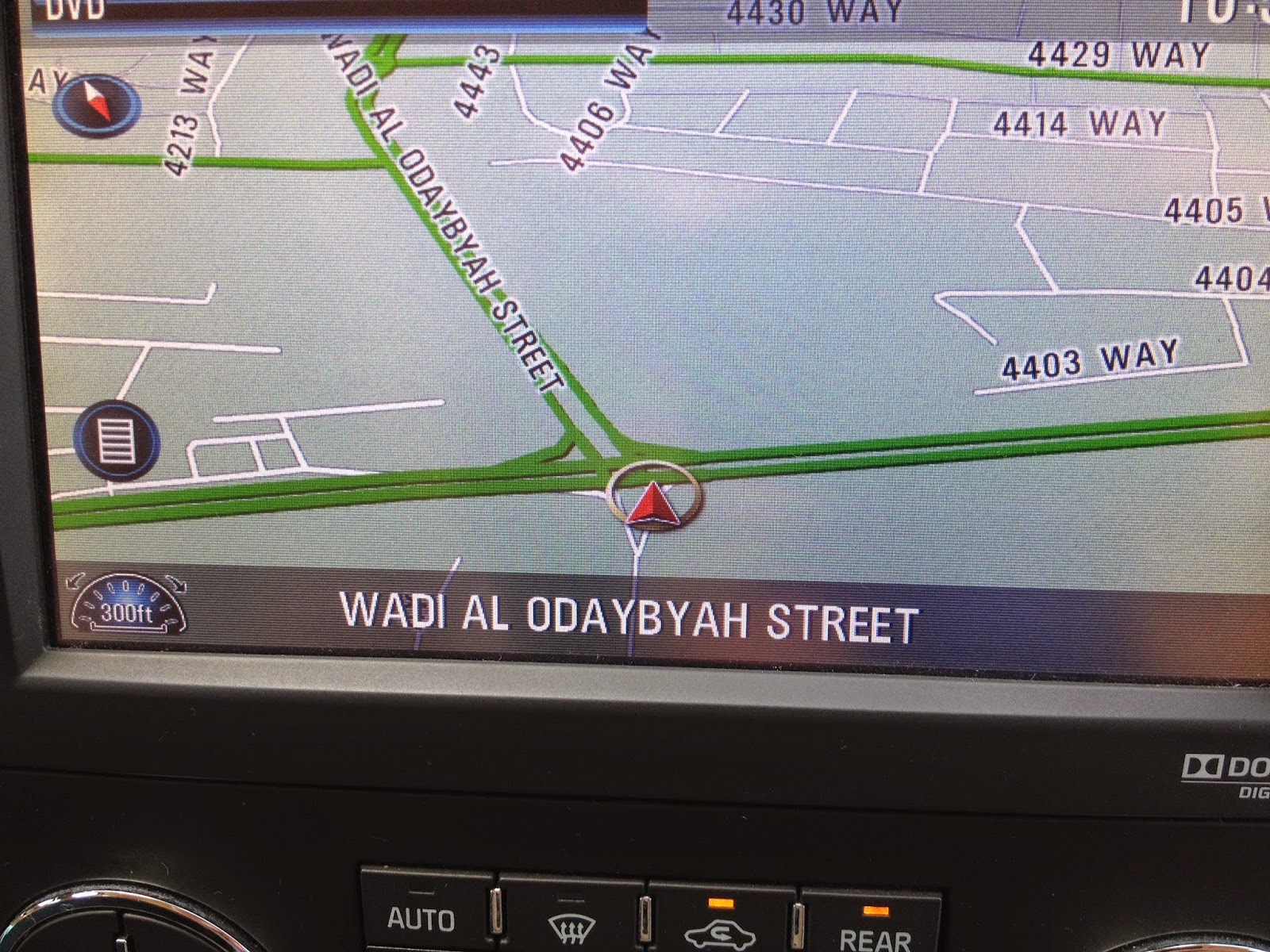 Here is my GPS at the same spot.  How do you go from Athaiba to Odaybyah??  I have also seen Althaibah, with an 'L'.  This is the case with most areas, such as Bowsher and Ghubra, but there seems to be the most variations with Azaiba.

Now, the GPS in this car only shows you where you are.  Don't expect it to get you where you want to be.  It is not programmed for Oman.  This vehicle was manufactured in Arlington, Texas, by the way!  And even if a street has a definite name, there is probably not a sign where you need it to be.  Following and giving directions has been a real challenge.  And you can't just say, turn right at the mosque.  Too many mosques.  Say, turn right at the green mosque.  :) 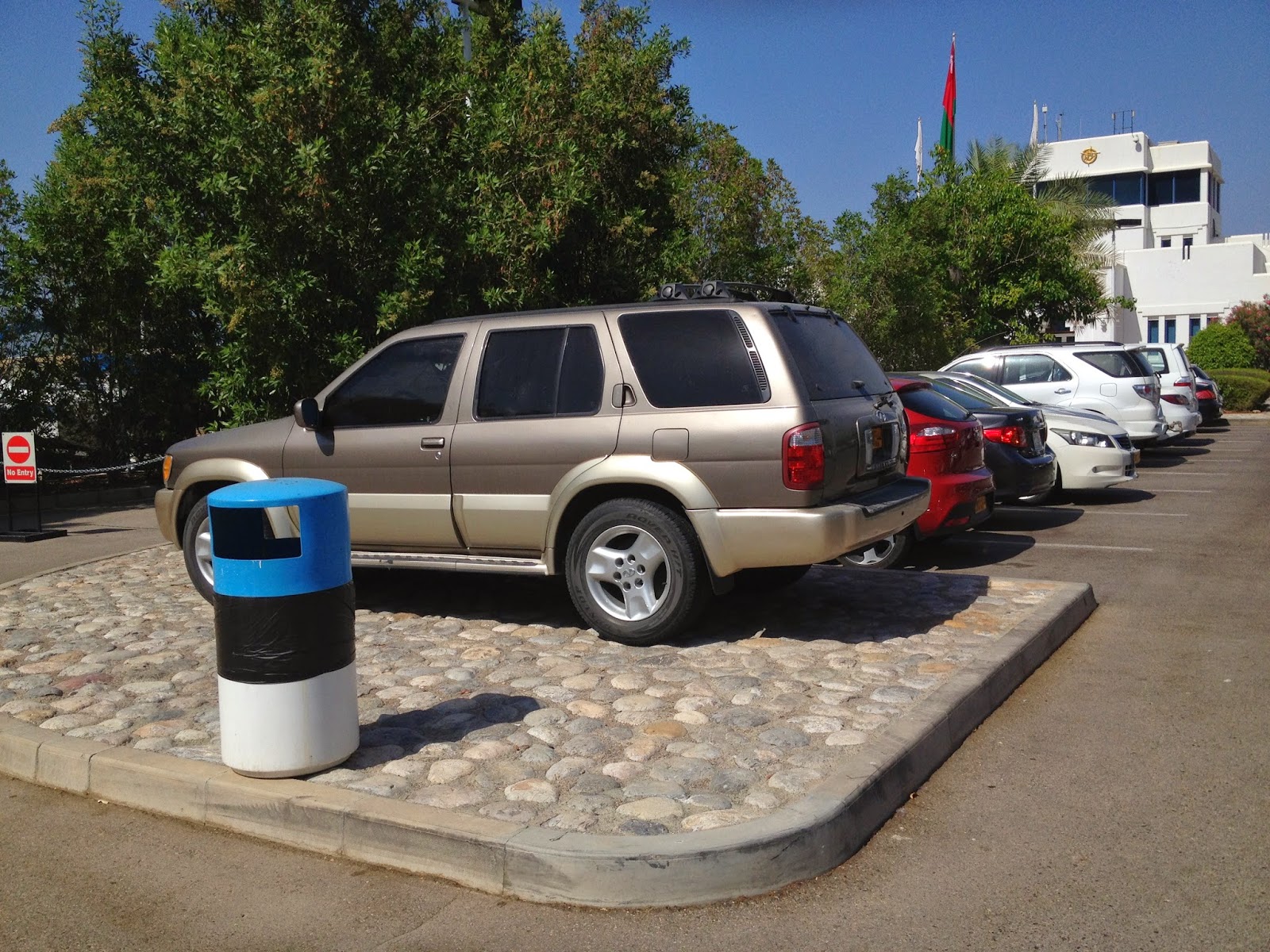 Now we will move to parking.  Oh, don't get me started.  So, there are a lot of buildings in Muscat. Nice buildings.  But none of them seem to have enough parking.  So what do you do if you can't find a parking spot?  You create one!  Any flat surface will do. 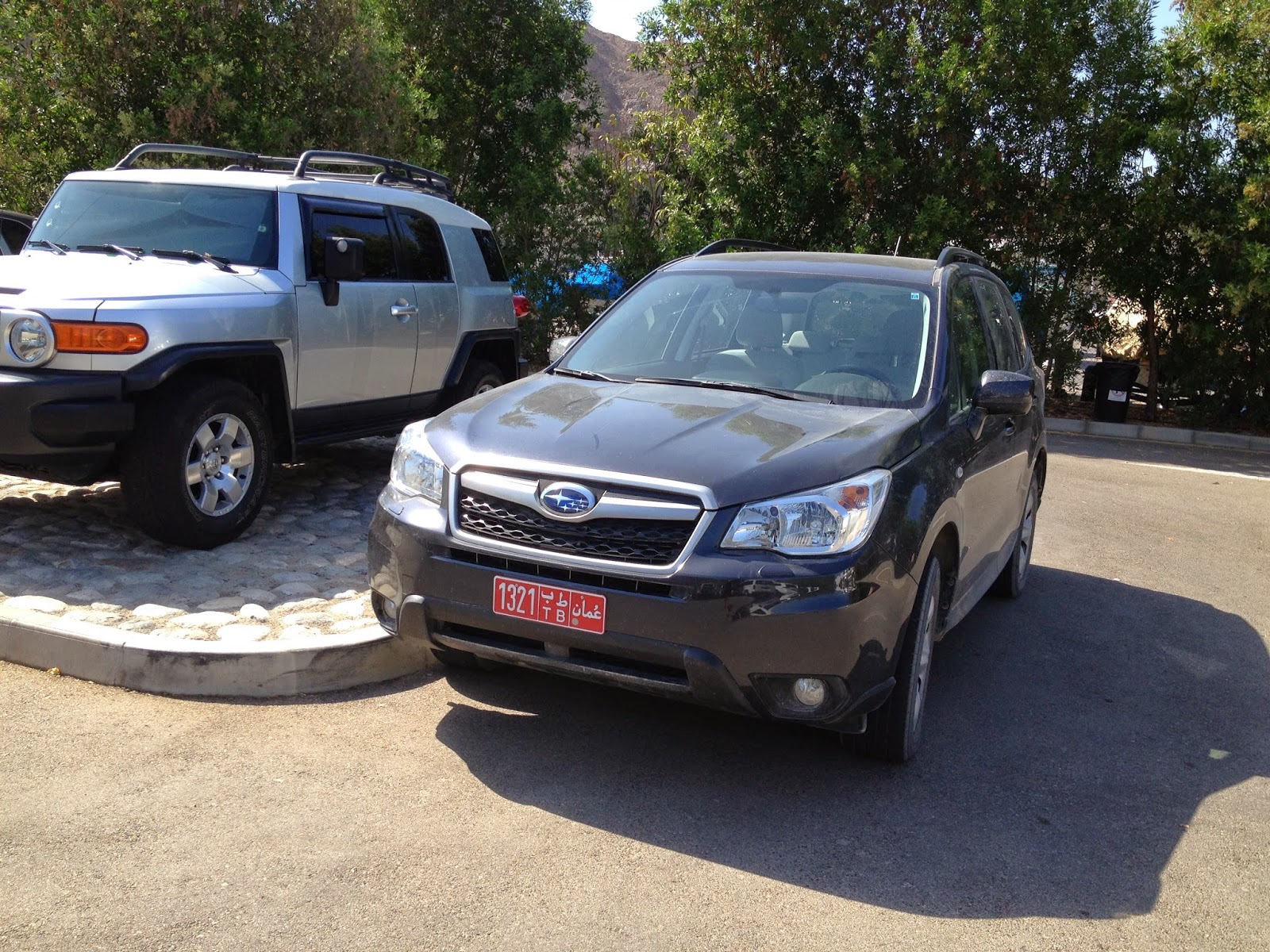 Even if if blocks traffic flow in the parking lot.  That is not your problem after all.  It is everyone else's problem. 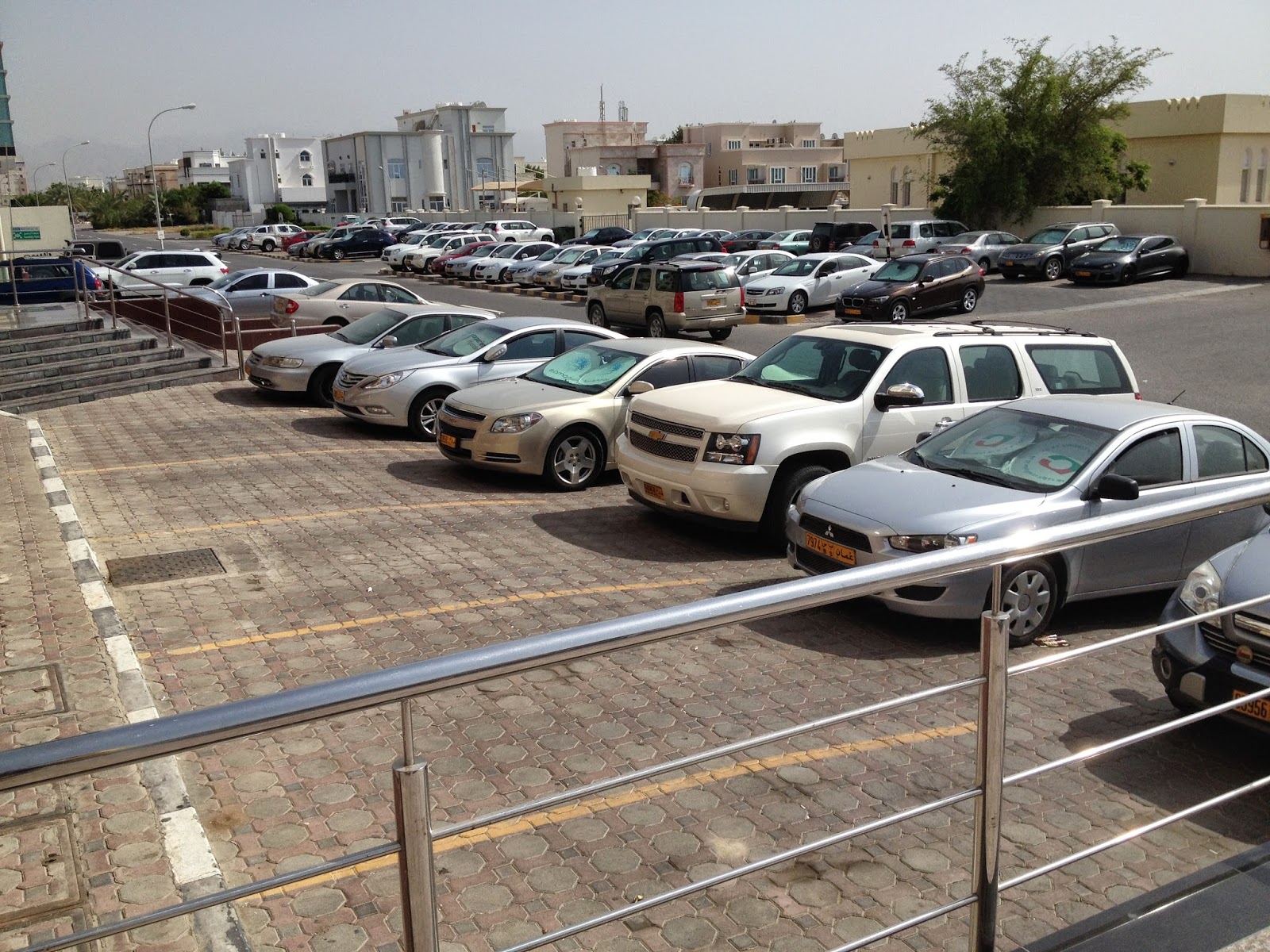 You see that white dotted line on the left of the picture?  That is the actual curb of this parking area in front of Al Fair.  Why are all these cars parked so far out?  They are right by the street, so that no one will park behind them and block them in.  Because that happens often, and has happened to me before in this spot. 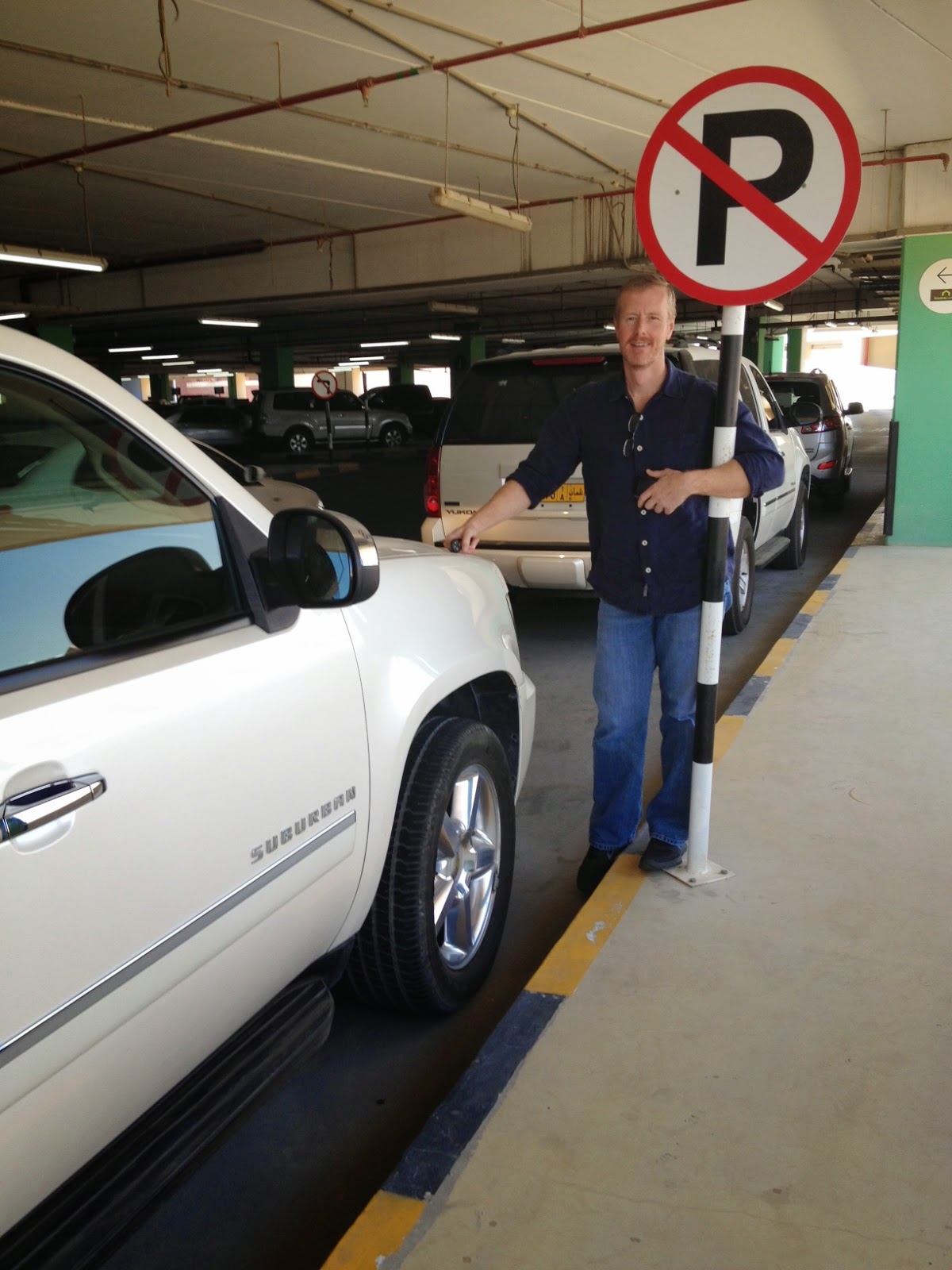 So this is what happens if you live in Oman long enough.  If you can't beat 'em, join 'em!  Here is Joe and yes, we are parked in front of a 'No Parking sign'.  See the line of cars in front of us.  But NOT anywhere that would block anyone.  I am not excusing our behavior, just explaining that sometimes it rubs off!  And there is no threat of being towed when parked illegally. 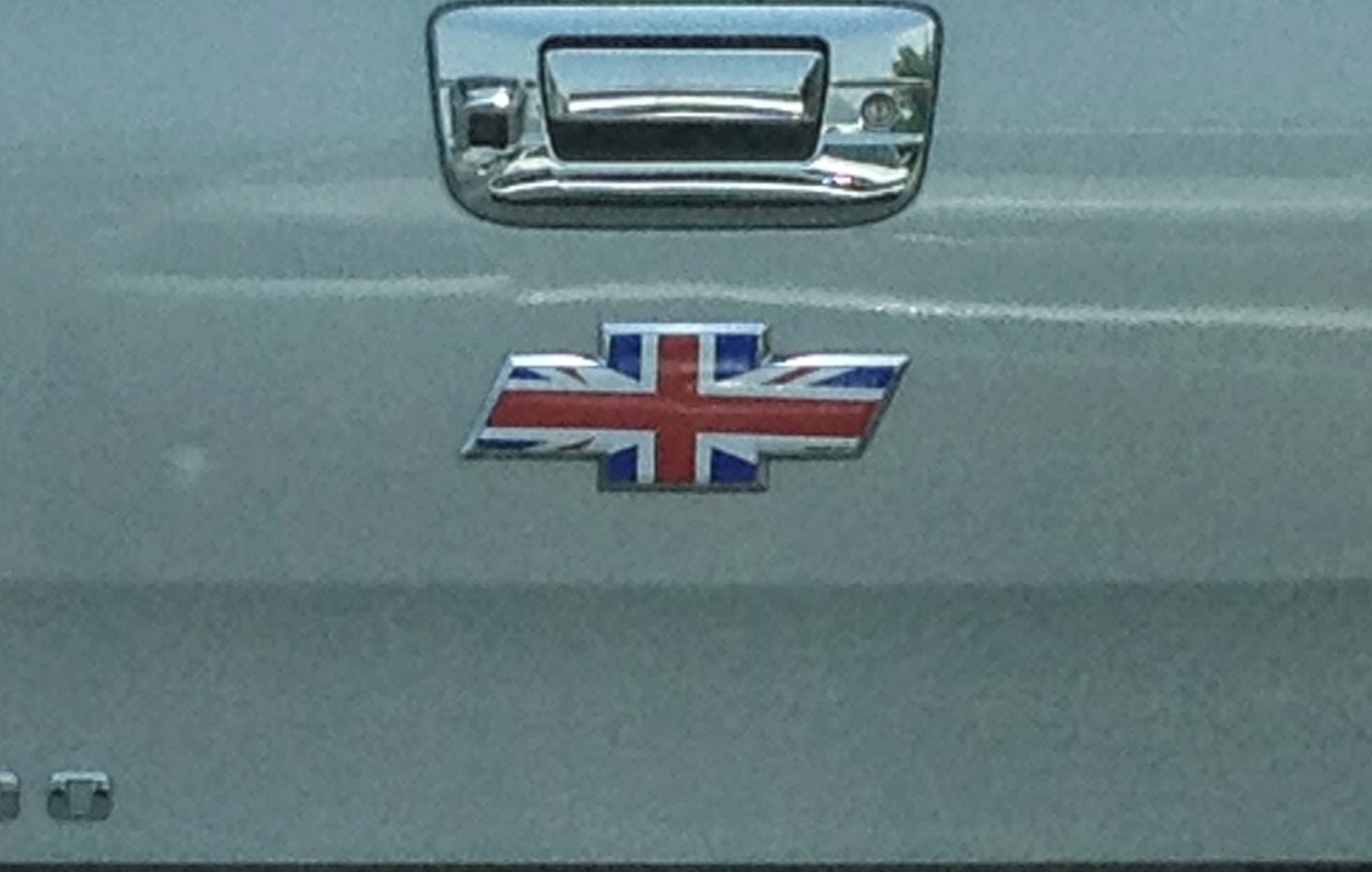 Another random picture.  Chevrolet is an American company, and as 'American' as apple pie!  But this guy had a different idea! 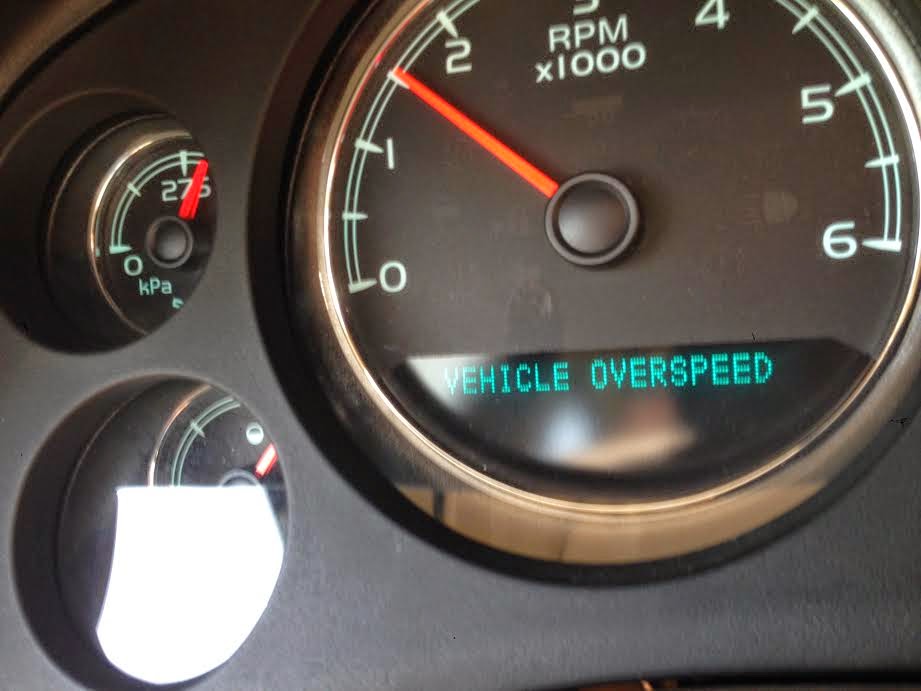 I also did not take this picture.  All cars in Oman are programmed to annoy you if you go over 120 kilometers per hour, or 75 miles per hours.  Different vehicles accomplish this differently.  Ours just beeps twice when you exceed 120, and this message stays on. I have been in other vehicles where the beeping will continue the whole time you are over 120.  With a driver who was oblivious to the beeping.  :/ 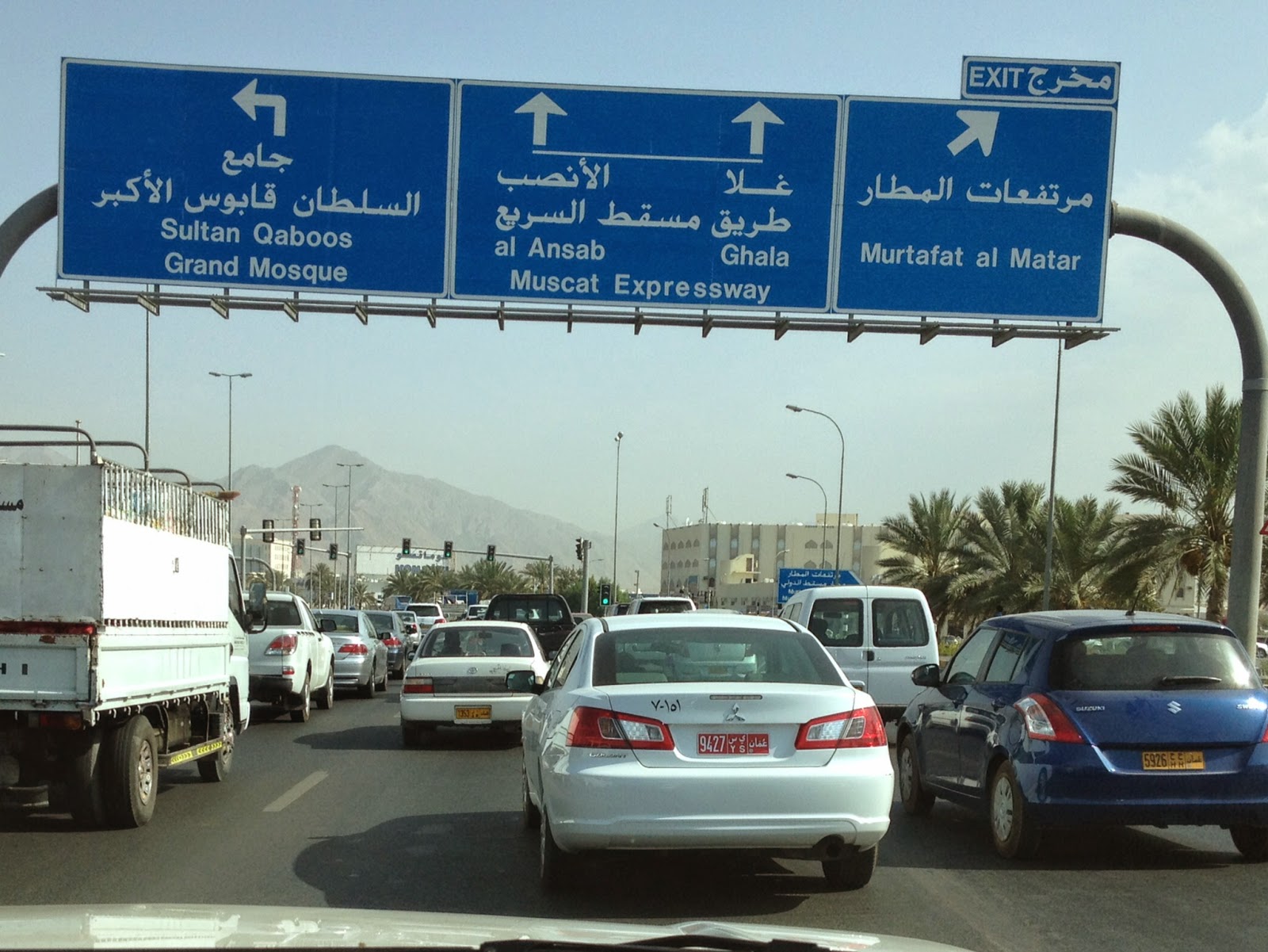 There are other issues with the drivers in Muscat.  They are notorious for tail gating.  Turning any direction from any lane.  And cutting you off.   If someone wants in your lane, they will get in your lane.  No matter if they are a small car and that I drive a large SUV.  I can't tell you the number of times I have almost been side-swiped!  In the US, we are trained to be friendly and courteous drivers.  Not that everyone is, of course, but most people try to be.  Either people here don't think about being courteous, or courteous means something different here.

I once heard Johnny Carson tell a joke.  "What is the shortest amount of time ever recorded?  The time between the traffic light turning green and the car behind you honking!"  Well, if Johnny Carson were still alive, he would have to revise that joke for Oman.  The lights work differently here.  Before a light turns red, the green light will flash for a few seconds.  Then, the yellow light will flash.  Then the red light.  When the light is going to turn green, it will turn yellow first.  So, I have been honked at several times, before the light turns green!

Speaking of being honked at.  I am going to confess my own shortcomings as an American driver in Oman.  Namely, roundabouts!  There are very few roundabouts in the US.  I never learned how to drive in them.  I always feel like I am playing a game of 'chicken' in roundabouts.  I have been honked at more than a few times.  Now I use my blinkers a lot, and that seems to cut out on the honking.

I was talking to my friend, Kristin, who moved back to Texas from Oman.  She misses driving in Oman!  She thinks they drive too slow in Texas, now that she had lived here for a few years.  I have to say, there is some freedom in knowing that some rules are more like 'suggestions'.  But they are starting to crack down on reckless driving.  New law is that you can now be thrown in jail for TEN days for talking on your cell phone, running a red light, driving on the shoulder, among other offenses.

I have visited Kuala Lumpur twice now.  That is real city driving, as opposed to Oman, which is more like a large US suburb.  They drive on the wrong side of the road, and there are tons of motorcycles between the lanes.  I have no doubt that in a couple of months, I will be missing driving in Oman!!!
Posted by Wanda Holmes at 6:34 PM